Why the F-35's First Combat Mission Proves Nothing 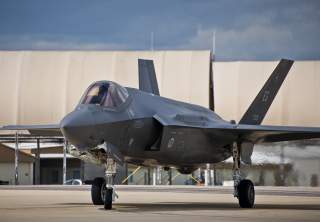 This is what the F-35's first combat mission proves.

It can take off.

It can fly from its airbase to a designated location.

It can drop a bomb.

And that's all, folks.

The U.S. F-35's combat debut (Israel was probably the first to actually use the F-35 in combat) was always likely to be a milk run. Having one shot down, say by a Russian-made S-300 over Syria, would hardly be good publicity for a controversial aircraft in desperate need of good news.

Still, this wasn't much of a trial by fire. On September 27, a Marine Corps F-35B, based on an amphibious group in the Arabian Sea, reportedly struck a Taliban weapons cache using a GBU-12 and a GBU-32 JDAM smart bomb.

As Task and Purpose's Paul Szoldra points out, using a hundred-million dollar plane to drop $40,000 worth of bombs to destroy a pile of old AK-47s seems hardly a good use of the taxpayer's money.

But bombing the empire of Taliban doesn't answer the fundamental question about the F-35: is it a weapon that works? Of course the Pentagon and Lockheed Martin can build an airplane that can take off and drop a bomb. So could the Wright Brothers.

But the F-35, which costs almost a hundred million dollars apiece, was built for more than that. It's an expensive, cutting-edge warplane whose expense is supposed to be justified by its stealth features, sophisticated sensors and data linking capabilities. Which all sounds very formidable, but also requires an environment where those capabilities are put to the test and—painful as it sounds—the bugs are discovered during combat. Jet fighters or household toasters, that's how machines are perfected.

Right now, there are questions about whether the F-35 can fire its cannon or missiles accurately, whether the bugs can be ironed out its software and whether the aircraft can reliably fly without breaking down.

What would it take to truly say the F-35 has passed its trial by fire? First, it would need to demonstrate that its stealth features enable it to fly without detection in the presence of advanced air defense radars. The Taliban don't have those, but Russia and China do. And in the way that military technology trickles down, so eventually will Iran, Syria and other nations. The F-35 will also need to prove that it can resist intensive electronic warfare, such as the array of Russian and Chinese jammers and spoofers to disrupt radio communications, GPS navigation and datalinks.

Those datalink capabilities, which enable the F-35 to receive and pass on targeting and situational awareness information to other aircraft, may work in a lab. So might aircraft's sensors, which are supposed to fuse multiple streams. But they need to be demonstrated amid the chaos of battle.

And of course, the F-35 must prove that it has real combat chops. It will need to encounter and shoot down enemy jets without taking losses, or at least not many losses. It will need to survive advanced surface-to-air missiles and anti-aircraft guns. And, the Joint Strike Fighter must show that it can strike by reliably and accurately dropping its bombs.

Bugs afflict any new device. Especially the F-35, given its technological sophistication and its bizarre develop-it-while-you-buy-it approach. Presumably—or hopefully—all these bugs will be fixed. But as for combat testing, unfortunately the only way to test an advanced warplane is to fly it against advanced opponents. That means Russia or China, or at least an Iran or North Korea. The consequences of such a conflict would probably outweigh the benefits of giving the F-35 a true combat shakedown.