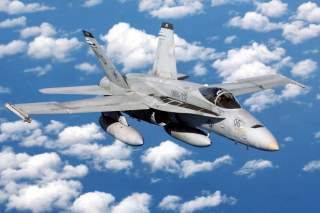 That day, the McDonnell Douglas F/A-18C Hornet completed its final operational deployment in United States Navy service. Strike Fighter Squadron Thirty-Four (VFA-34) “Blue Blasters” was the last unit to fly the “legacy” Hornet in the Navy. and the USS Carl Vinson (CVN-70) the last aircraft carrier to embark them. While the Marine Corps plans to continue flying its Hornets a little while longer, the Navy has fully committed to its next-generation air wing centered on Boeing F/A-18E/F Super Hornets and Lockheed Martin F-35C Lightning IIs.

Though the Hornet earned the reputation of an enduring design throughout its service life, the fact was the aircraft underwent a considerable number of changes. The F/A-18 that retired earlier this year was very different from the one that began its career over thirty years ago.

The Hornet entered service in 1983 as the F/A-18A and B-variant. The ‘A’ was a single-seater that operated with frontline Navy and Marine Corps squadrons while the ‘B’ was largely used as a trainer. Though establishing a legacy of precision-strike capability, this was not always the case; the A/B-model was initially limited to the AGM-62 Walleye television-guided bomb via the use of the AN/AWW-9 Datalink Pod. Otherwise, the Hornet was a “dumb” bomber, dropping the Mark-series of General Purpose Bombs and cluster bombs.

Later, block upgrades added the ability to employ the AGM-65 Maverick infrared-guided missile, the AGM-84 Harpoon anti-ship missile, and the AGM-88 HARM for targeting air defense radars. These block upgrades comprised the Lot 10 and 11 Hornets, also known as the F/A-18C and D-Hornets, which emerged in 1987. The latter was a two-seater utilized by the Marine Corps, with the rear seat occupied by a Weapons System Officer (WSO) specializing in strike duties or Forward Air Controller (FAC) duties.

But the most consequential modifications were yet to come, changes that would truly put the “strike” in “strike-fighter.” It began in November 1989, when the first F/A-18C/Ds of Lot 12 (constituting Blocks 29 to 31), referred to as the “Night Attack” Hornet, were delivered to the Navy. The new Hornets, later designated F/A-18C(N), were designed with night-vision goggle (NVG)-capable cockpits, low-level flying ability at night via the Hughes AN/AAR-50 Thermal Imaging Navigation System (TINS) pod, digital map display, colorized multipurpose displays (MFDs) replacing the monochrome green displays of the F/A-18A/B, and a new Heads-Up Display (HUD) utilizing raster graphics.

Additional upgrades arrived the following year. The Hornet acquired the ability to launch the new AGM-84E Stand-off Land Attack Missile (SLAM), which would debut during Desert Storm in 1991. Subsequent lot/block upgrades would also lead to the installment of the AN/ARC-210 HAVE QUICK/SINCGARS VHF/FM radio, and the more powerful, yet more efficient, F404-GE-402 power plant. Finally, beginning with Lot 16 in 1993, the F/A-18’s original AN/APG-65 radar received a major upgrade. The new radar, known as the APG-73, delivered “higher throughputs, greater memory capacity, improved reliability, and easier maintenance.” Around the same time, the F/A-18 finally integrated the new AIM-120 AMRAAM missile into its arsenal, giving it deadly Beyond-Visual Range (BVR) capability in the fighter role. The APG-73 is still operated by the “legacy” Hornets in Marine Corps service was the original radar equipped by the F/A-18E/F Super Hornet when it first entered service.

The biggest hurdle the Hornet had to overcome was in the realm of precision strike. Though it was capable of employing Mavericks and Walleyes relatively early in its service life, its ability to employ laser-guided bombs (LGBs) was more limited. This left the Grumman A-6E Intruder as Naval Aviation’s only all-weather, full-arsenal precision strike platform for many years past the introduction of the Hornet and the end of the Cold War.

The AN/AAS-38 NITE Hawk Forward-Looking Infrared (FLIR) pod was designed specifically for the F/A-18 and was introduced into the fleet the same time as the Hornet. However, the initial production model was not equipped with a laser. Therefore, it required a secondary aircraft (such as a TRAM-equipped A-6E) or an FAC on the ground to designate the target on behalf of it. It also required the AN/ASQ-173 laser spot tracker to receive the designation signal, which meant another hardpoint had to be occupied with something other than ordnance or fuel. This severely constrained the F/A-18s GBU-series LGB employment ability and rendered it largely a “dumb” bomber for over its first decade of operational service.

But the “Night Attack” Hornet introduced in 1989 brought along the AAS-38A, which was equipped with a laser target designator/ranger (LTD/R), allowing it to designate and track its own targets for destruction, though it still required an ASQ-173 to receive secondary illumination. During the next four years, the AAS-38A was fully incorporated into the fleet among the C/D-variants. It would take a while longer, however, for all the Navy’s frontline Hornet squadrons to transition to the F/A-18C(N)’s level and attain the ability to drop LGBs independently. Finally, in the mid-‘90s, the AAS-38B arrived with the Lot 17 Hornets, equipped with a laser spot-tracker. The F/A-18 was now finally capable of finding and lasing its own targets and receive external laser energy all using a single pod.

The NITE Hawk was hampered by low-resolution imagery and reliability issues, however. The search for a new targeting pod was on and it was found in the AN/ASQ-228 Terminator II Advanced Targeting FLIR (ATFLIR). The ATFLIR offered better-quality imagery, including at higher altitudes and longer ranges and entered service in the 2000s. It steadily replaced the NITE Hawk and was the Super Hornet’s targeting pod as well. ATFLIR was supplemented by even better pod during the 2010s, the AN/AAQ-28(V)4 LITENING, which offered 1K imagery, the highest-quality available, and extensive connectivity features and high levels of digitization. This pod will continue to be used by Marine Corps Hornets well into the future.

The evolution of the F/A-18 while in operational service reveals an interesting retrospective regarding American air power. Despite breathlessly touting its precision-strike capabilities, the U.S. never quite mastered the craft until well after dazzling television audiences in the 1991 Gulf War. The Navy and Marine Corps, in particular, arrived later to the game and it was not until the mid-90s precision-strike, particularly LGB-delivery, became an air wing-wide capability. Even the Air Force took time to full-incorporate precision-strike into its own “light fighter,” the General Dynamics F-16 Fighting Falcon. As it approached the turn of the century, PGM capability was limited to F-15E Strike Eagles, F-117A Nighthawk stealth fighters, and the Air Force’s counterpart to the A-6, the venerable F-111 Aardvark. By comparison, all combat aircraft in the American inventory today are capable of precision-attack, including heavy bombers like the B-1B and B-52H.

The Hornet is also proof the most critical test is an ongoing one. Both men and platforms end up utilized in environments and scenarios different from what was conceptualized; the ability to adapt, improve, and overcome challenges proves the true mettle of a system. In the case of the F/A-18, it passed that test time and again and the Navy, Marines, and air arms of the world over are better for it. As the U.S. increasingly places its faith in a fewer range of platforms, it can only hope the F-35 will prove itself at least half as adaptable, reliable, and versatile as the Hornet was.

Edward Chang is a freelance defense, military, and foreign policy writer. His writing has appeared in The National Interest, The American Conservative, and War Is Boring.