Why Ford vs. Ferrari Is More Than a Movie 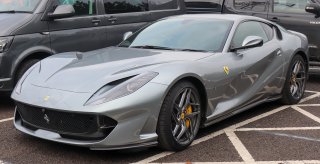 “Boomers” may be just “okay” today. But back in the 1960s, they were a rowdy bunch who craved fast cars and wild rides. And they certainly didn’t want to drive their father’s paneled station wagon.

Henry Ford II wanted the boomers’ business. He decided to make a splash in the sports car market by jumping into the race car racket. Initially, he planned to do it by buying the world’s premier race car manufacturer, Ferrari. But that plan fell flat. So Ford moved to Plan B: to field his own, all-American team.

This isn’t the first big-budget movie about Le Mans. In 1971, an uber cool Steve McQueen cut the corners on the fabled race course. Bale and Damon can’t match McQueen’s cold-as-ice blue-eyed stare, but, to be fair, they are portraying real-life characters not caricatures of race car drivers.

Ford v Ferrari is also a much more engrossing and entertaining film than Le Mans. Rather than endless laps around the track and leavened with loads of off-track melodrama, this movie has an engrossing true story to tell.

Of course, it’s a fictionalized version of the real story. If you prefer your tales to hew closer to actual history, you’d do better to watch the recent documentary The 24 Hour War.

But frankly, you still might want to see Ford v Ferrari first, just to get invested in the incredible rivalry of men (the first woman raced at Le Mans in 1975) and machines.

Spoiler alert: Ford kicks butt. But what fascinates most isn’t WHO won as HOW he won.

Ford won by brute force. He carpet bombed his race team with cash, hired the best drivers and engineers, unleashed the creativity, ingenuity and awe of American technology and crushed his Italian counterpart… but good. The Ford team bested Ferrari again and again for years to come.

The bottom line: Ford made American race cars great again. And the way he did it is an object lesson in the wonders of the free market capitalist system.

An abundance of data shows that economic freedom delivers the best outcomes for human communities—better education, better healthcare, a better environment. But it also is an incredibly powerful vehicle for human expression, innovation, productivity and prosperity.

The free market gave us more than Ford Mustangs. From Apple watches to Alexa, the free market keeps delivering new and better goods and services.

Today, free markets are under assault from corrupt predatory economics, like those practiced by the Communist Chinese Party. They are bad-mouthed by Gen Z know-nothings who think socialism is cool. And they are dissed as “inefficient” by economic nationalists who promise government can run the economy better, if only we let them—rather than the market—pick economic winners and losers.

And that’s what makes a film like Ford v Ferrari so right for our times. It reminds us that when Americans unleash the constructive power of capitalism, we can accomplish great things.

And, okay, maybe it is time for boomers like me to give the next generations their turn. But as they grasp the wheel, they would do well to remember what previous generations achieved with the American model and to think hard before they discard the principles and tools that unleashed the best of human potential.

James Jay Carafano is a vice president of The Heritage Foundation, a leading think tank based in Washington, D.C.