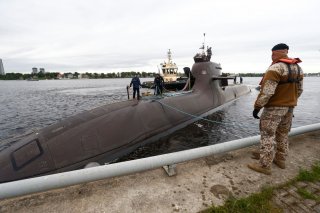 Germany’s Type 214 has successfully been exported to several countries and on paper has some great underwater capabilities—but suffers from a few design flaws.

The Type 214 is a smaller submarine, but capable nonetheless. According to the manufacturer’s website, the Type 214 submarine can undertake a number of different missions. These range from “littoral water operations to ocean-going patrols” and include “anti-surface ship and anti-submarine operations, intelligence, surveillance and reconnaissance tasks, and special forces operations.”

Still, the Type 214 does incorporate some improvements. The Type 214 can dive much deeper than its parent class thanks to a stronger, more crush-resistant hull design—up to 400 meters compared to 250 meters for the Type 212, or about 1,300 feet deep.

The single-hull design also gives the Type 214 a very clean hull surface. This reduces drag and creates less underwater turbulence for a smoother, quieter design. The Type 214 also benefits from an air-independent fuel cell propulsion design that converts chemical energy into electricity using onboard oxygen and hydrogen tanks. The Type 214 can cruise underwater at slower speeds using fuel cell technology for up to several weeks without needing to surface.

In addition to fuel cells, the Type 214 has a lower acoustic signature thanks to a “low-revolution, permanently excited motor” that allows for “maximum speed without transient switching noises,” though this claim is somewhat dubious.

Though the class is indeed capable, it is not without its detractors. Some foreign buyers have mentioned serious flaws in the design, which if true, call the Type 214’s capabilities into question.

The Hellenic Navy ordered four Type 214 hulls in the early 2000s and had a whole host of complaints. Perhaps the most serious of these was a structural imbalance in the 214’s hull which resulted in excessive rolling and pitching during rough sea conditions caused by a top-heavy design. The propeller design was allegedly loud and caused excessive cavitation. Other problems mentioned were overheating fuel cells that had an inadequate amount of output and a leaky hull.

The Republic of Korea Navy also operates nine Type 214 submarines domestically known as the Son Won-Il-class. The first of the class was manufactured in Germany, while the following eight were license-built domestically. The RoK Navy also had some similar complaints as the Hellenic Navy, principally they experienced issues with excessive cavitation caused by the propeller screw, and therefore excessive noise.

Pakistan also tried to acquire the Type 214 class in the mid 2000s, which would have been far and away Pakistan’s most advanced class. A deal was very close to being reached, but fell through when Pakistan opted for a more affordable Chinese design.

Despite the teething issues the class experienced, these problems—especially the unbalanced hull design—seem to have been addressed. Minor problems aside, the Type 214 is an attractive option for middle-weight navies that do not have the cash or operational requirements for larger designs. In fact, the 214’s smaller size would be an advantage for countries focused not on power projection, but coastal defense—which is probably why the Type 214 has enjoyed the level of success it’s had with countries like South Korea and Greece.