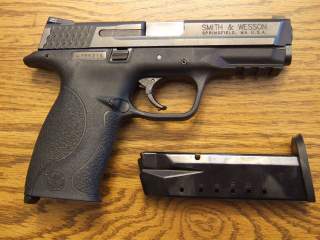 The top firearm manufacturer in America is not only an American company but one of the oldest. Established in 1852, Smith & Wesson now enjoys annual sales of more than two million guns of all types a year, enjoying a comfortable lead over competitors. Smith & Wesson is probably the most historically significant, consistently successful firearms country in the United States, with a history of innovation that has brought iconic guns and ammunition into widespread use.

In 1852, Horace Smith and Daniel B. Wesson founded the Smith & Wesson Company in Norwich, Connecticut. The company designed and manufactured some of the first metallic-cased firearms using the “Volcanic” cartridge. The use of a self-contained cartridge that included bullet, powder, and primer streamlined the feeding system, leading to a rate of fire practically limited to the loading rate of the weapon. The cartridge was combined with a tubular magazine and lever-action loading system and brought to market in both a pistol and rifle form. The company was renamed the Volcanic Repeating Arms Company before Oliver Winchester, a major investor, forced the company into insolvency, eventually spinning off lever-action guns into his own company—The Winchester Repeating Arms Company.

Smith & Wesson regrouped and started a new company, The Smith & Wesson Company, just as Samuel Colt’s patent on the revolving handgun cylinder expired. The two designed and began production of a new revolver, the seven shot .22 Rimfire Seven Shooter, eventually known as the Model 1, in 1857. Sales took off during the Civil War as soldiers purchased the compact pistols as backup weapons. Between 1857 and 1881 the company sold 261,000 Model 1s. In 1861 the company released a larger version, the Model 2, available in .32 Rimfire.

The company’s third revolver, the Model 3, catapulted it into the world of international recognition. The .44 caliber Model 3 was a so-called “top break” revolver, in which a lever caused the barrel and cylinder to rotate ninety degrees on a hinge, instantly expelling spent shell casings and making the revolver ready for fresh ammunition. The simplified reloading process made the Model 3 was particularly useful for mounted cavalry. In addition to the U.S. Army the Model 3 was also adopted by Russia, Argentina, Japan and Turkey. The Model 3 was also popular on the Western frontier, and fans included legendary lawman Wyatt Earp.

Smith & Wesson steadily rolled out new technologies in firearms, introducing a line of double action revolvers in 1880, a hammerless revolver in 1887, and in 1899 the .38 caliber Military & Police revolver, later known as the Model 10, which eventually gave birth to the .38 Special revolver round. Six million Model 10s were sold during the product’s lifespan.

The early to mid-twentieth century saw the company produce eight hundred thousand Model 10 revolvers for World War II and introduce revolvers in .357 Magnum (1935) and .44 Magnum (1955), then the most powerful handgun cartridge in America. The Smith & Wesson Model 29, designed for the .44 Magnum cartridge, saw sales explode after being featured in the 1971 Clint Eastwood film “Dirty Harry.” The year 1955 also saw introduction of the Model 39 double-action pistol, the first adopted by a law enforcement agency in the United States.

Smith & Wesson concentrated primarily on revolvers during the latter half of the twentieth century, which left the company poorly positioned to take advantage of the explosion in popularity of high capacity nine millimeter Luger revolvers in the 1980s, the so-called “Wonder Nines.” However, the company quickly recovered and launched its own line, the 4006 series. The company also released a new pistol round, the .40 Smith & Wesson, which subsequently became popular with law enforcement agencies interested in a round more powerful than nine millimeter.

Today Smith & Wesson fields a diversified line of firearms, from revolvers of every caliber to its own highly successful M&P 2.0 series of high capacity double action pistols. In 2003, the company began selling its own version of the iconic M1911A1 .45 handgun. The company also produces its own line of AR-15 rifles under the M&P line. The company was first overall in firearm sales in 2016, selling 1.7 million handguns and nearly four hundred thousand long guns. In an industry where corporate mismanagement has often lowered quality and instituted numerous, potentially dangerous recalls, Smith & Wesson has maintained a reputation for reliable, safe firearms.

Smith & Wesson’s appeal lies in its historical significance, record of innovation, and reliability. A wide product line means consumers looking for a particular type of handgun usually can count a Smith & Wesson among their choices. Add in a dollop of popular culture, from Westerns to the streets of San Francisco, and Smith & Wesson is a compelling choice. All of these factors  combined will keep the iconic gun company ahead of the pack for the foreseeable future.

Here's Why the U.S. Army Won't Be Using Glocks