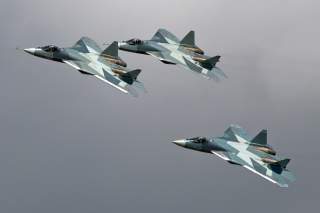 Key point: Being president has its perks.

Rather, the unprecedented decision to utilize six of Russia’s most advanced fifth-generation fighters—approximately half of the currently available roster—in a VIP escort mission is the latest step in Russia’s ongoing Su-57 branding campaign. ​

Mark Episkopos is a frequent contributor to The National Interest and serves as research assistant at the Center for the National Interest. Mark is also a PhD student in History at American University. This first appeared in May 2019 and is being republished due to reader interest.