Why Hong Kong Holds The Key To Confronting China 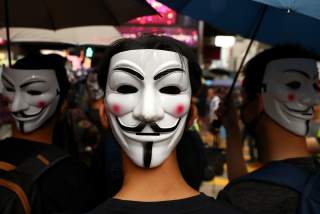 Bullets are flying and face masks are now banned, but the protests in Hong Kong continue. That residents awoke on October 2nd, the day after China’s National Day, without a massive crackdown is a tactical victory for the protestors themselves, a stark admission of weakness from the Communist Party of China (CCP), and an important object lesson for Washington. After all, the Party would not have abided large-scale unrest on the 70th anniversary of its founding without reason. But the United States has given them a compelling one: money.

President Trump’s tariff campaign is exacerbating Beijing’s slowing growth rate. In August, the President linked the trade negotiations with the CCP’s handling of Hong Kong, saying that leaders in Beijing should “work humanely with Hong Kong” before negotiating with him. Concurrently, the House and Senate have passed their respective versions of the Hong Kong Democracy and Human Rights Act, which would streamline a review of the preferential trade and export terms that have aided Hong Kong’s growth into a global financial city.

For all the talk of an administration adrift and a divided Congress, the United States has responded to the crisis in Hong Kong with remarkable agility and precision. As the Sino-American relationship eases into protracted competition, it will be critical for policymakers to derive the correct strategic lessons from tactical successes.

The conclusion is clear: to compete with the CCP, think like the CCP. Bringing this imperative to scale will require Washington to relearn the basics of grand strategy.

Since the fall of the Berlin Wall, America has sat atop the global power hierarchy. This status has shaped the way Washington thinks about security. Nations who have it all also have everything to lose, and for decades Washington has begun its strategic assessments with this bleak outlook.

Traditionally, in American higher education and elite policymaking, grand strategy begins with defining vital national interests, flows into threat assessments, and ends with utilizing resources to mitigate threats and secure interests. This rote process conditions status quo powers to be highly reactive, jumping from one crisis to another.

The Party’s military strategy in the Indo-Pacific has followed this model. The People’s Liberation Army (PLA) has long mass-produced ballistic missiles as an asymmetric offset to the expensive, forward-deployed American Seventh Fleet. Its Strategic Rocket Force, meanwhile, is investing in hypersonic weapons in order to evade and defeat costly U.S. missile defenses.

Before Washington struck gold with its Hong Kong response, policymakers were playing whack-a-mole with the Chinese Communist Party. True, Congress addressed the infiltration of Confucius Institutes into American academia and problematic Chinese investments in U.S. businesses while the administration tackled Huawei’s surveillance risks and disinvited the PLA from the multilateral naval exercises. But there were few proactive attempts to tease out and exploit the Party’s weaknesses.

Hong Kong, however, provides a template to do just that. The CCP is weak there. Communist Party apparatchiks on the Mainland rely on the island-city to protect their private slush funds from seizure, and the larger Chinese economy depends on Hong Kong for a steady foreign investment flow. Meanwhile, the very factors that enable these functions – Hong Kong’s market economy and its rule of law – represent a clear political threat to the CCP.

Thus far, the White House and Congress have leveraged the Party’s economic vulnerability to deter a repeat of Tiananmen Square in Hong Kong. The status quo, however, can’t be expected to hold forever. Washington would do well to examine additional political, economic and strategic levers at its disposal to help shape the scope and limit the severity of Beijing’s response when it inevitably comes. And it would do even better to clearly communicate to the Party that a clampdown on Hong Kong will inevitably come at a high cost.