Why India’s Hypersonic Missile Could Trigger A Nuclear War 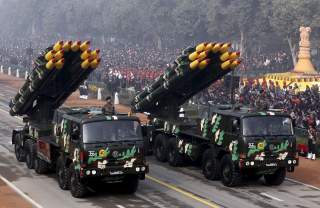 India’s test of a hypersonic missile signifies more than the advance of Indian weapons technology.

It also is one step closer to triggering a nuclear war with Pakistan.

Ironically, the first launch of the Hypersonic Technology Demonstrator Vehicle, or HSTDV, was a failure. The HSTDV, which is shaped almost like a sailing ship, is supposed to be a testbed for developing future hypersonic weapons such as cruise missiles. It is launched atop an Agni 1, an Indian ballistic missile.

“The vehicle was test launched using the Agni 1 missile platform that was to take it up to a predetermined altitude where scramjet technology—the ability to fly at speeds in excess of Mach 6 while using atmospheric oxygen as oxidizer—had to be validated with separation of the platform and a short flight at high altitude,” according to India’s Economic Times.

“Sources said that while the missile on which the platform was mounted successfully took off from the range, the test could not be completed to demonstrate the vehicle at hypersonic speed as the Agni 1 did not reach the desired altitude for the test. Scientists are looking at the technical reasons behind this and are studying all available data.”

While that doesn’t necessarily mean the HSTDV has a problem, it’s not good news for India’s strategic nuclear deterrent. “The Agni 1 is a nuclear-capable missile that is in service with the strategic forces and has been successfully tested several times in the past,” noted the Economic Times. “Its failure to reach the desired altitude is a reason for concern and is being studied.”

Yet unproven or not, the existence of an Indian hypersonic project is an ominous step for India’s cold war with its neighbor Pakistan. Hypersonic missiles—defined as rockets with a velocity of at least Mach 5, though Russia and America are developing Mach 20 weapons—are dangerous because of their speed. Though the weapons have yet to be tested in combat, the U.S. military is concerned that Russian and Chinese hypersonic weapons may travel so fast that they can’t be intercepted. At the tactical level, this means that aircraft carriers and air bases could be destroyed by a salvo of missiles.

But on the strategic level, hypersonic weapons are truly frightening. A hypersonic missile can deliver a nuclear warhead more quickly than a ballistic missile. Or, a hypersonic missile armed with a conventional warhead might be able to destroy an opponent’s nuclear missiles in a first strike, but without the attacker having to resort to nuclear weapons.

Whether or not such a strike would be successful, or whether anyone would be confident enough to risk a nuclear exchange by using hypersonics, isn’t the point. Unlike the United States versus Russia and China, whose homelands are separated by thousands of miles of ocean, the distance between New Delhi and Islamabad is just over 400 miles. A Mach 5 or 10 weapon missile launched from India or Pakistan could hit its target in minutes (Russia’s Avangard hypersonic glider reportedly has a speed of Mach 20, with the United States working on a weapon equally as fast).

Knowing that India has hypersonic weapons could make Pakistan feel trapped in a “use them or lose them” mindset regarding its nuclear weapons.