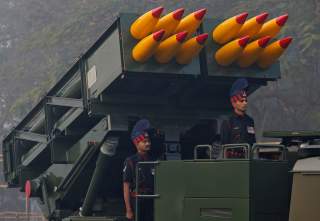 Why is India ordering $700 million worth of missiles from Russia?

One reason may be humiliation over Pakistan using long-range air-to-air missiles to shoot down an Indian fighter last February. Yet the purchase comes amid reports that of problems with Russian missiles.

The choice of the R-77 is interesting. It is the Russian equivalent of the radar-guided U.S. AIM-120 AMRAAM (Advanced Medium-Range Air-to-Air Missile). First introduced in 1991, the AIM-120 is a beyond-visual-range weapon: it is listed by the U.S. Air Force as having a range of 20-plus miles, though an extended-range version under development would considerably increase the missile’s reach.

But the Indian Air Force has had an unpleasant taste of AMRAAM. It was probably an AIM-120, fired by a Pakistani F-16 at long range, that downed an Indian Air Force MiG-21. On February 26, Indian warplanes struck inside Pakistan, hitting bases used by militants who regularly attack attacked Indian forces in the long-disputed Kashmir region. Pakistan retaliated the next day with an airstrike on Indian positions along the border. “The Pakistani Air Force strike package included eight F-16s, four Mirage-3 aircraft, four Chinese made JF-17 ‘Thunder’ fighter,” said India’s NDTV news site. “Other aircraft in the formation were escort fighters to protect the Pakistan strike formation from any IAF retaliation. The large Pakistani attack formation was detected at 9.45 am, when they came within 10 kilometers [6 miles] of the Line of Control. A small number of these fighters then proceeded to cross the Line of Control, when they were intercepted by eight IAF jets, which included four Sukhoi 30s, two upgraded Mirage 2000s and two MiG-21 Bisons.”

What happened next is unclear. Pakistani jets intercepted the attackers: India says U.S-made F-16s were involved, though Pakistan denies this. India claimed to have shot down an F-16, which Pakistan also denies. At a news conference soon after the incident, India displayed debris marked “AIM-120,” which it claimed as proof that American-made weapons were involved. Those claims are significant because Pakistan’s use of F-16s to strike India could violate agreements with the United States.

But India had little choice in admitting that one of its old MiG-21s was shot down, after its pilot was captured and paraded on Pakistani television. At the same time, Indian press has portrayed the AIM-120 as less than effective. “The American make was unsuccessfully used by the Pakistan Air Force (PAF) to target Indian Su-30 MKIs on 27 February, a day after the IAF strikes on Balakot,” claimed The Print.

In any case, India now seems eager to upgrade its air-to-air missile arsenal, especially longer-range weapons. But India’s polyglot collection of aircraft and missiles poses integration problems. “Integrating other missiles — for instance, the Israeli Derby air-to-air missiles — with the Su-30 will require permission from Russia,” Indian defense sources told The Print. “Russia and India can jointly implement the program of modernization of the IAF’s air-to-air missiles. All the requirements of the Air Force can be discussed and met. The work could start as soon as possible once the formal request is made.”