Why India Chose Neutrality on Ukraine 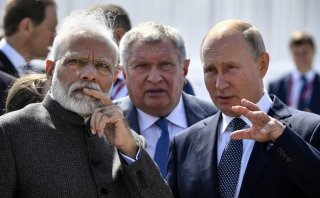 Throughout the war in Ukraine, India has declined to support U.S. and Western sanctions against Russia. This is occurring despite the fact that India is an increasingly important security partner for the United States in the Indo-Pacific, as Washington and New Delhi cooperate on containing Chinese aggression and expansionism. What explains their divergence on Ukraine?

The Indian Ministry of External Affairs previously described the relationship between Russia and India as a “special, privileged strategic partnership.” This relationship was recently strengthened when President Vladimir Putin met with Prime Minister Narendra Modi in New Delhi on December 6. The two leaders extended a program for military and technological cooperation until 2031 and signed a number of bilateral defense agreements, including one for the manufacturing of assault weapons. Putin and Modi hold frequent meetings and yearly conferences.

India’s decision to pick a side in the Russia-Ukraine War is influenced by its heavy reliance on Russia. Russia and India also share close military ties, as New Delhi imports military equipment from Moscow, including missile defense systems and other military hardware. Further, it can be reasonably inferred that such purchases are to continue in the future, and, therefore, such ties cannot be easily broken. Therefore, India’s reticence to support the Western camp on Ukraine was a wise choice given India and Russia’s long-standing historical partnership.

Additionally, if New Delhi were to cut its ties with Russia, Moscow would naturally be attracted to India’s adversaries in the region, Pakistan and China. This will strengthen the connections between China, Russia, and Pakistan, perhaps to India’s detriment.

With respect to the Russia-Ukraine crisis, India has three options. First, India can support Russia in its endeavors overtly. Second, it can remain neutral on the issue. And third, it can align itself with Ukraine and its Western partners.

Presently, India has persistently condemned the war and expressed concern over the threat of nuclear warfare. However, despite Modi telling Putin that “today’s era is not an era of war,” India has not held Russia accountable for its invasion of Ukraine. Such a position of neutrality has been favorable for India as New Dehli continues to have access to Russian oil. Since the war started, Russia has become the third-largest oil supplier to India.

While India’s current position has been advantageous for New Delhi, there are risks. First, New Delhi is concerned that Russia might move closer to China as the war progresses. Second,  Russia will soon require more than fence-sitting from India. As the war continues, this possibility will grow. It is prudent to think that Russia will fulfill India’s needs only if Moscow is satisfied that Indian support is firm.

It is clear that the most suitable option for India is to remain neutral. India cannot choose either the Russian or the Ukrainian side in this conflict. Choosing Russia over Ukraine would lead to a displeased United States, and would impact India economically. Further, India requires U.S. support to counter China’s aggression in the Indo-Pacific. Alternatively, New Delhi extending its support to Ukraine, and calling out Russia’s wrongs, would lead to turbulence in Russian-Indian relations. This would also be extremely detrimental to India’s military needs, and energy requirements.

Dr. Sukalpa Chakrabarti is presently Deputy Director at the Symbiosis School of International Studies, Symbiosis International (Deemed) University, Pune. Dr. Sukalpa Chakrabarti has been teaching across specializations in politics, international relations and international business & economy at UG to PG levels since 2001 and has been in the senior level of academic administration for nearly a decade now. Her areas of interest are International Relations (especially Global Political Economy, International Security, and Geopolitical Risk Analysis), Politics & Public Policy. From an area studies perspective, Asian geopolitics, Africa’s trade and economy, and India’s public policy and diplomacy have been her major focus. Dr. Chakrabarti is widely published and has chaired and presented papers at various international and national conferences.

Avinav Singh Khatri is a research intern at Nepal Institute for International Co-operation and Engagement (NIICE), and is a post-graduate student (International Relations) at Symbiosis School of International Studies, Pune (India)

Vedant Choudhary is a student of law at Symbiosis Law School, Pune (India)