Why India May Well Suffer the Most From the Coronavirus 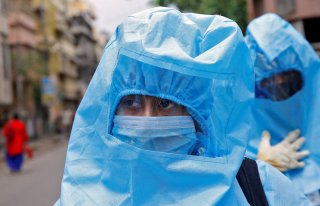 India’s accelerating COVID-19 crisis risks quickly overwhelming its health care system and dramatically thwarting Prime Minister Narendra Modi’s attempts to reinvigorate the country’s economy. COVID-19 has begun spreading in India at an exponential rate, with more 9,240 confirmed cases of the virus as of April 13. The true number of cases, however, may be much higher, given that India had only conducted 195,748 tests for COVID-19 for its 1.4 billion people as of April 12.

Thus far, the disease has hit India’s two largest metropolitan areas — Mumbai and New Delhi — the hardest. But there are now growing signs of significant spread throughout the rest of the country as well. Indeed, India’s COVID-19 outbreak appears to be a few weeks behind that of the United States, meaning it will likely continue to ravage the subcontinent for at least several more weeks, if not months. And as it does, the contagion will hit India’s poorest segment of society the hardest, while exacerbating religious tensions between its Hindu and Muslim communities.

The Struggle to Stop the Spread

Modi’s government has reacted swiftly compared to the COVID-19 outbreak. On March 24, the prime minister announced plans for a 21-day national lockdown after several cities and states moved to close their own borders and institute their own lockdowns. But while this may help slow down the spread of COVID-19 in India, the implementation of such containment efforts is already proving to be a challenge.

For one, it is structurally difficult for much of India’s population to implement social distancing measures. The average household size in India is estimated to be around 5.8 people (by comparison, the average household size in Germany and the United States is just 2.7 and 3.4 people, respectively). India’s population density, particularly in urban areas, also makes maintaining the distance from other people when leaving homes a nearly impossible feat. Moreover, the longer the lockdown drags on, the more frequently people will attempt to challenge the order for economic reasons, which could overwhelm the ability of India’s security services to implement and enforce it. Indeed, the implementation of quarantine measures has already fueled clashes in areas such as Maharashtra and Kashmir.

Even more concerning is the threat of significant COVID-19 spread through India’s densely populated slums. On April 1, the Dharavi slum in Mumbai — which is home to an estimated 700,000 to 1,000,000 people in an area covering just five square kilometers (or nearly 2 square miles) — reported its first death and three cases of COVID-19.

Ripe for a Health Crisis

Even before the COVID-19 pandemic, there were concerns about India’s preparedness for such a public health crisis. Beyond the logistical and geographical challenges, much of its population is immunocompromised. Many Indians are living with HIV, tuberculosis and/or high blood pressure. India is also home to roughly half of the world’s diabetics. A large number of Indians live in some of the world’s most heavily polluted urban areas as well, decreasing their lung capacity and health. All of this could leave a significant portion of its population particularly vulnerable to respiratory illnesses such as COVID-19, and one that hits those with underlying health conditions more severely. Moreover, India’s extreme poverty and limited access to water and sanitation only exacerbate these issues and create a climate ripe for mass spread.

Decades of underspending on healthcare have left the capacity per capita of India’s healthcare system quite low:

These statistics place India well behind the developed countries who are seeing their own healthcare systems overwhelmed by the pandemic. New Delhi has already secured a $1 billion loan from the World Bank to boost COVID-19 preparedness. But in a country the size of India, such a loan won’t be enough to solve the problem.

Nevertheless, Modi is under pressure to keep the Indian economy afloat amid the mounting health crisis. After securing another term in 2019, he had hoped to refocus his efforts on getting India’s slowing economy back to a high growth level of 7 percent. Modi and chief ministers from each state have already been discussing ways to accelerate exits from the nationwide lockdown to mitigate the economic disruptions. This could see areas less affected by the virus opened first before slowly lifting restrictions elsewhere. But given that the outbreak is only in its early stages in India, a premature lifting of the lockdown orders would raise the risk for a resurgence of the virus.

Modi is hoping that India’s past experiences with other viruses and its quick action of shutting down the country when the official number of cases were only in the hundreds will stave off the worst-case scenarios. But India’s economy will still suffer. Economic growth in the second quarter will certainly be negative, the question is by how much. Some estimates show India contracting by as much as 10 percent year-over-year in the second quarter. Even if Modi tries to re-open the country’s economy in an accelerated fashion, India’s economic growth this year could dip to 1 percent or less.

The economic shutdown will hurt India’s poor population and its informal economy the most. India has already introduced some targeted stimulus measures designed to alleviate some of the pain for its poor populations, such as providing free cooking gas. But such efforts will only provide minimal help. The government and central bank’s targeted financial and fiscal stimulus measures for businesses will struggle to penetrate the informal sector as well.

Fanning the Flames of Social Tensions

In addition to the financial and humanitarian fallout, the COVID-19 crisis also risk exacerbating ongoing religious and communal tensions between Hindus and minority groups in India. Modi’s ruling Bharatiya Janata Party (BJP) has introduced several, controversial policies linked to Hindu nationalism. This most recently included revoking the autonomy of Jammu and Kashmir (India’s only Muslim-majority state), and passing of the Citizenship Amendment Act (which grants citizenship to only non-Muslim refugees from Afghanistan, Pakistan and India).

These policies have already been a source for unrest and division within the country, and the government’s handling of the pandemic could further stoke those tensions. Some BJP members have already accused Muslims for spreading the virus. Muslim leaders inside and outside of India (including Pakistani Prime Minister Imran Khan), meanwhile, have accused Modi’s government of ignoring the needs of non-Hindu Indian citizens amid the COVID-19 crisis. In the aftermath of the outbreak, New Delhi could be all the more inclined to lean into additional Hindu nationalism in an effort to divert attention away from economic woes that inevitably come as a lasting result of the outbreak.

Will India Bear the Brunt of the COVID-19 Pandemic? is republished with the permission of Stratfor Worldview, a geopolitical intelligence and advisory firm.