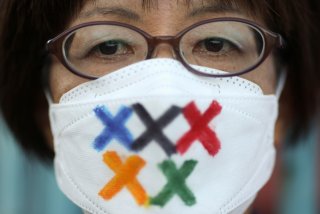 On July 8, Japan’s government announced that the Summer Olympic Games will be held without spectators due to a spike in coronavirus infections. From the start, Tokyo 2020 has been beset with problems. Originally scheduled for last summer, organizers decided in March 2020 that the pandemic required postponing the event for one year. In the interim, public and official opinion has swung decidedly against the Games. Eighty percent of Japanese people are against the Olympics going ahead. Leading politicians from both the opposition and ruling parties have called for their cancellation, along with the country’s leading newspapers. Major corporations are withdrawing their sponsorships.

Tokyo 2020 will be anything but the global kumbaya envisioned by its organizers, the International Olympic Committee (IOC). Why then, in the face of acts of both God and man, does the IOC persist in moving forward? The answer lies—as with so much of the IOC’s decision making—in the corrupt self-dealing of its senior officials, who routinely put their interests ahead of the public good.

The IOC president, Thomas Bach, and John Coates—who not-so-coincidentally serves as vice president of the IOC, head of the Tokyo 2020 Coordination Commission, head of the Australian Olympic Committee, president of the Court of Arbitration for Sport, and chairman of the Australian Olympic Foundation—don’t want Tokyo 2020 cancelled because it could derail their conspiracy to give the 2032 Summer Games to Brisbane, Australia.

Under new rules governing the bidding process for the Games—which were written by Coates in 2019, when he served as Chair of the IOC’s Legal Affairs Commission and its Working Group for Future Games Elections—the IOC created panels to enter into rolling dialogue with possible candidates for the Summer and Winter Games. The panels can recommend that a host be picked without a contested vote, which is exactly what happened last February, when the IOC’s Future Host Summer Commission designated Brisbane as the “preferred candidate city” to host the 2032 Summer Olympic Games. The IOC’s Executive Board unanimously endorsed the recommendation, and a pro-forma rubber-stamp vote by all IOC members in Tokyo on July 21 is all that remains to complete the coronation.

Bach’s rush to judgement on Brisbane’s bid understandably rankled the other 2032 aspirants. Dagmar Freitag, chair of Germany’s parliamentary sports commission, complained: “The new selection system, praised by IOC president Thomas Bach as ‘more cost-effective and apolitical, and also preventing any unacceptable influence’ can hardly be surpassed in terms of non-transparency.” Another commentator was no less scathing in has assessment. Veteran Olympics watcher and IOC bete-noire Jens Weinrich wrote that Brisbane’s selection was “non-transparent, without competition, without comprehensible criteria.”

The problem for Bach and Coates is that cancellation of the Tokyo Games would reopen the bidding for 2032. Tokyo would throw its hat in the ring and given that all the necessary preparations are already in place, it would take a real stretch of the imagination to dismiss it out of hand. Which explains why, as head the Tokyo 2020 Coordination Commission, Coates was so adamant about holding this year’s games as scheduled.

Selection of host nations for the Olympics has always been a dirty business, one that John Coates knows all too well. As president of the Australian Olympic Committee (AOC) and a leader of the 2000 Sydney bid, Coates admitted to offering $70,000 in inducements to two African members of the IOC the night before Sydney won the 2000 Games by two votes. Coates arranged for the daughter of another IOC member to be enrolled in a home economics course at a Sydney college and had Australia cover the $156,000 cost of gifting seven prized horses to a third IOC member who fancied them.

Ever since Brisbane lost its first bid to host the Summer Games in 1992, Coates has been a man with a mission. His campaign for redemption began in 2015, when he hosted IOC President Bach on a visit to Australia and first floated the idea of the Brisbane Games. Through his careful cultivation of Bach and gaming of the selection process as an IOC insider, he has succeeded in rigging the deck by changing the rules in his favor.

Ruthless, male-dominated autocratic leadership has come to define the business of international sport. Under its previous president, Sepp Blatter, football’s governing body FIFA became the sporting world’s most notorious criminal enterprise. Bach, Coates, and their cabal at the IOC are now running a close second. Their railroading of the Tokyo and Brisbane Games should alarm and outrage any but the most sycophantic of observers.

It’s almost certainly too much to expect that the IOC’s members will reject the Brisbane fait accompli on July 21, but they would do well to reflect on the corrupt house of cards that Bach has built and the disrepute it has brought to the Olympic ideal.