Why Iran Is Embracing the Taliban’s Victory 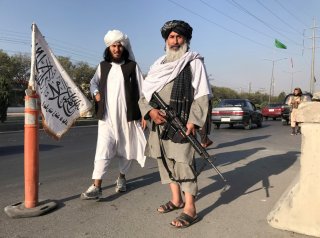 The Taliban’s rapid takeover of Afghanistan doesn’t seem to have the Islamic Republic of Iran overly concerned. Iran and the Taliban have long had basic differences over their interpretations of Islam, in which the Sunni Taliban’s radical Salafist beliefs continue to view Shiites unfavorably. Meanwhile, Iran is the main force that represents Shia Muslims in the Islamic world.

Perhaps it was these stark differences that resulted in the Taliban’s August 8, 1998, attack on the Iranian consulate in Mazar-i-Sharif that killed eight Iranian diplomats. The killing came as such a shock to Iran that it nearly pushed it to declare war against Afghanistan and the Taliban. However, according to Hossein Mousavian, then the chairman of the Foreign Policy Committee of the Supreme National Security Council (SNSC), Supreme Leader Ali Khamenei vetoed the SNSC’s decision to invade Afghanistan at the last minute.

Under such circumstances, Iran would definitely welcome the U.S. invasion of Afghanistan. Without any Iranian boots on the ground, one of Tehran’s regional enemies had been toppled, removing a challenge to Iranian national security.

Although Iran and the Taliban disagreed on a wide range of issues, they soon agreed on one thing: animosity towards the United States. The United States is the biggest factor affecting both the Islamic Republic and Taliban’s threat perceptions. In addition, given that Iran’s national security doctrine has focused on achieving U.S. withdrawal from the region, even the Taliban’s return to power in Afghanistan might come as good news, especially as Iran and the Taliban have had some contact in recent years.

However, it should be noted that Iran’s policy towards developments in Afghanistan and the rise of the Taliban has two main features. The first is what can be read in Iranian foreign minister Javad Zarif’s comments: Iran supports intra-Afghan talks to form an inclusive government.

The second, which Iranian officials have not clearly stated, is welcoming the Taliban’s anti-Western approach. The Taliban is doing well in opposing the West. Despite not saying so, Iran had considered Ashraf Ghani’s government to be a puppet government run by the United States. Furthermore, Iran has usually supported Abdullah Abdullah, who is of Tajik-Pashtun origin and used to be a political rival to previous Afghan presidents Ghani and Hamid Karzai. However, the Pashtuns’ high degree of influence and control over Afghan politics had sidelined Abdullah.

After the U.S. assassination of Iran’s Islamic Revolutionary Guards Corps’ Quds Force leader General Qassem Soleimani, U.S. Central Command announced on Twitter the flight and refueling of  U.S. Air Force E-10 airborne early warning and control aircraft in eastern Afghanistan in support of coalition forces. While former President Ghani stressed the Afghan government’s impartiality in the matter, Iran got the message. In such circumstances, and especially now that Iran is facing escalating tensions over its nuclear program, the U.S. exit from a neighboring country is good news. But does this mean that Iran has played a role in the Taliban’s rise to power in Afghanistan?

There is evidence that Taliban officials have visited Iran in recent years, and there might be a common understanding between Tehran and Taliban leaders over Afghanistan’s future. Moreover, it is highly likely that Iran has used the Taliban in its talks with the former Afghan government in recent years, particularly given that Tehran and Kabul had disagreed over sharing the Helmand River that crosses between western Afghanistan and southeastern Iran.

At the inauguration of the Kamal Khan Dam in Nimroz province on March 24, 2021, Ghani announced: “We will no longer give water to Iran free of charge and if Iran wants more water, it must provide Afghanistan with oil.”

Meanwhile, Brigadier General Esmail Qaani, the current chief commander of the IRGC’s Quds Force, had developed expertise on Afghan affairs over many years. In the summer of 2018, Qaani traveled to Afghanistan’s Bamyan province under the name of “Esmaili” and as the deputy Iranian ambassador to Afghanistan, where he met with Mohammad Tahir Zahir Daikundi, the provincial governor. It took two years after Soleimani’s assassination and Qaani’s appointment as his successor for Afghans to realize that the person who met with the governor of Bamyan was in fact the deputy commander of the IRGC Quds Force.

Qaani’s role in Afghanistan becomes even clearer when one considers that the IRGC Quds Force created the Fatemiyoun Division, a group consisting of 20,000 Afghan Shia fighters, to fight against ISIS in Syria alongside Bashar al-Assad’s government forces and Lebanese Hezbollah. In April 2019, there were reports suggesting that about 2,500 to 3,000 of these Afghan Shiite militants returned to Afghanistan. There have been also concerns about the possible emergence of proxy groups similar to Lebanese Hezbollah and the Iraqi Popular Mobilization Forces (PMF) in Afghanistan by Iran–backed militants.

Meanwhile, there is a clear distinction between Iran’s relations with its other regional proxy groups and what is happening in Afghanistan. In Lebanon and Iraq, Iran’s relationship with its proxies is one of “devotion” and “obedience.” But in Afghanistan, Iran has had an “equal” relationship with the Taliban. Yet there is no guarantee that the two sides will continue to work together now that their common U.S. foe has been defeated. Moreover, in the United States’ absence, Iran could use the Fatemiyoun Division as an effective tool to implement its plans amid a changing Afghanistan.

Given that Iran considered Ghani to be a U.S. puppet, the continuation of his presidency would have not been in Tehran’s favor. In line with this, state-run Iranian media have been trying to whitewash the Taliban’s image. While Iranian officials used to call the Taliban a barbaric, radical, and extremist group that has tarnished Islam, they have recently tried to portray the group as a collective that has learned from its past unpleasant experiences. On the anniversary of the August 1998 killing of Iranian diplomats in Mazar-i-Sharif, state-run TV, as well as the Iranian Foreign Ministry, did not mention the Taliban as the perpetrators behind the crime. State-run TV blamed an unknown group of armed men who entered Mazar-i-Sharif before the Taliban’s takeover of the city. Iranian state television also aired programs on Afghanistan recently on which commentators claimed that the Taliban had changed in basic and positive ways.

The Taliban’s return can serve Iran domestically as well by scaring dissidents and political opponents who have opposed the Islamic Republic’s regional and internal policies. For those who have loudly raised their voices in the streets against the entire establishment in recent years and months, Afghanistan serves as a cautionary tale that the same fate could await Iran. With the Taliban in power in Afghanistan once again, Iran will tell people that they should prefer security over freedom. The same attempt was previously made by state media during its coverage of the fight against ISIS after the terrorists began endangering Iran’s western borders through its presence in Iraq and Syria. This time, Iranians may have to buy the Islamic Republic’s argument: Although the economy is not doing well and Iranians lack social, civil, and political freedoms, they have security—a precious commodity that they cannot find in other countries in the region.

At the same time, one should not forget that the Taliban, despite its insistence that it is embracing pragmatism, can still pose considerable threats to Iran. The Taliban’s Salafist view of Islam is the closest to that of Saudi Arabia’s, and the two have a lot in common when it comes to their view of political Islam. Saudi Arabia may be able to benefit from this exceptional opportunity to influence Iran through its shared border with Afghanistan, a prospect that had never been there for Riyadh before. As the Taliban government seeks recognition and the consolidation of its power, Afghanistan can become a battleground for Tehran and Riyadh to settle their differences, and Saudi Arabia can influence Iran’s political and security processes through the latter’s shared borders with Afghanistan.

All in all, one should not overestimate the Islamic Republic’s role in the recent developments in Afghanistan. Although Iran has welcomed the new changes in its neighbor, it has played a small role in bringing about the developments that occurred largely as a result of U.S. actions. Meanwhile, Iran has started pursuing new policies through its contacts with the Taliban. However, many still remain skeptical whether these changes will result in favorable outcomes for the Islamic Republic or if Afghanistan will become a major security challenge in the near future.

Saeid Jafari is a journalist and Middle East analyst. He has been published by Foreign Policy, the Atlantic Council, Al-Monitor, Responsible Statecraft, and Euronews, among many others. Follow him on Twitter: @jafariysaeid