Why Iran's Missile Attacks (And Threats) Matter to Americans 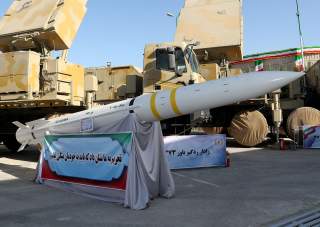 President Trump boasted in military in his State of the Union address Wednesday night. Trump is right that the military has received significant investments during his tenure. But recent events also reveal where there are vulnerabilities. Iran's missile attack against bases in Iraq last month wreaked havoc, although mercifully not resulting in the deaths of Americans. But the attacks showcased the formidability of the Iranian missile force and provided a glimpse of what a missile attack could do to the United States homeland if we are insufficiently defended.

President Trump has repeatedly called for specific initiatives to greatly improve U.S. missile defenses of the homeland to stay ahead of the pressing missile threats, but those initiatives have not materialized.

When Trump introduced his administration’s missile defense strategy at the Pentagon in January 2019, he said the U.S. sought the ability to "detect and destroy any missile launched against the United States anywhere, anytime, anyplace." With only one last budget left in the term, which the administration will soon release, his vision remains unfulfilled. There have been no serious changes to the missile defense architecture Trump inherited from Obama—yet.

The survival of U.S. forces stationed at the bases in Iraq is not due to missile defense systems intercepting missiles. There are no missile defenses in Iraq. There are limited numbers of those systems, but Mark Esper, the Secretary of Defense, and General Mark Milley, the chairman of the Joint Chiefs of Staff, recently told reporters that an obstacle for moving in a Patriot battalion to protect Americans in Iraq, is the need to get permission from the Iraqi government. Astonishingly, the Iraqi government, perhaps under pressure from the Iranian government, has not granted the United States permission to deploy defenses.

This makes Iran’s Foreign Minister Javad Zarif's boasts even more galling. "The damage we have done to the U.S. is extensive because, with all its military might, it could not prevent the missiles from hitting its base. It shows how vulnerable the U.S. is." He’s mocking to rally and inspire his domestic audience in the hopes it could calm the swell of protesters, furious and fed up with the regime's abuses. But the Islamic Republic’s missile attack should prompt the United States to make major adjustments to our missile defense architecture abroad but especially at home because with all our “military might” and with the world’s strongest economy, we can, and we must.

The Ain al-Asad attack leveled concrete blast walls and incinerated buildings.  Although nearly a dozen U.S. service members are being evaluated due to concussion symptoms, the attack did not cause casualties. That appears to be due to a combination of intelligence obtained hours before the attack that informed the U.S. about where and what was coming, the quick rearranging of the placement of U.S. forces and servicemembers taking cover in bunkers, and the Iranian regime choosing targets that seem to have intended to avoid loss of life. Still, even these non-nuclear missiles that did not hit Americans wreaked havoc, and the lasting health effects are still unclear.

Now imagine instead of American warriors hunkered down in Hussein’s bunkers, it was teachers, mailmen, bankers, or children huddled in bathtubs or basements throughout the United States.

Supporters of Obama's Iran deal bemoan Trump's withdrawal and are quick to blame Iran's aggression on his decision to leave it. But there is no evidence that the Iran deal moderated the regime's malign activities, including its support for terrorism and the development and proliferation of illicit weapons and missiles. Additionally, the Iran deal did not include restrictions on Iran's missile force, and UNSCR 2231, passed in tandem with the Iran deal, weakened the language on missiles and merely calls upon Iran to refrain from testing missiles capable of carrying nuclear weapons.

Let us not forget that Iran and North Korea have a history of cooperating on their missile programs, and despite Trump's efforts to negotiate with the Kim regime and the Kim regime's pause on long-range missile testing, Secretary of Defense Esper confirmed on a Fox News interview on January 25th what nobody really doubted, and that is that North Korea's nuclear missile program is still active.

While the United States tightens sanctions against North Korea and Iran in an effort to punish the regimes for their malign activities and to dry up their funds in an effort to hobble those same malign activities, Washington must seize the opportunity to better defend the U.S. homeland and vital interests. Having credible, robust defenses strengthens diplomacy, increases the credibility of deterrence, and if deterrence breaks down, provides defenses of critical offensive capabilities so that the United States has maximum options for a retaliatory response.

The Obama administration significantly cut funding to homeland missile defense in its first year in office, setting homeland defense backward. But in response to North Korean provocations in 2014, President Obama reversed his cancellation of a Bush initiative to field more ground-based interceptors (GBIs) to the current homeland defense system. He called for the deployment of 14 more, bringing the total of GBIs or “bullets” to shoot at incoming intercontinental ballistic missiles, to 44. But that was 2014, and the number and kind of missiles that can reach the U.S. homeland has increased in number and have improved, and so must homeland missile defense.

When North Korea was testing longer-range ballistic missiles in the first part of his administration, Trump personally intervened and requested supplemental funding for the defense budget, including for theater missile defense that we need abroad and for 20 additional GBIs to protect Americans at home.

That was two years ago, and the President’s additional GBIs are not in the ground providing protection of Americans.

Pentagon leaders opted to stop the initiative to deploy those 20 interceptors due to legitimate concerns with the part of the system intended to separate from the GBIs and collide with the enemy warhead. Instead, the Pentagon seeks to invest in improvements to have a "next-generation" system in the ground by the end of the decade.

Dramatic improvements to the homeland defense system deserve bi-partisan support, especially if they are intended to give the system the ability to intercept increasingly complicated missile threats that China and Russia can and will realistically pose. But the threats from countries like North Korea and Iran are evolving now, and so must our strategies and weapon systems. The current missile threats from rogue nations demand that the President's decision to make immediate improvements is honored.