Why Israel Is Paying Close Attention to Ukraine 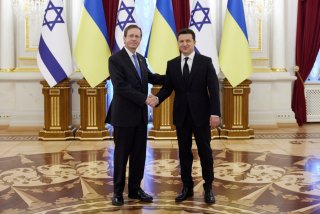 Months of rising tensions on the Ukrainian border finally came to a head this week when Russian president Vladimir Putin signed executive orders recognizing the independence of two Russian-controlled territories in east Ukraine, dispatched troops to occupy the territory, and finally announced a full-scale military operation. While most of the international community is currently grappling with the immediate aftermath and geopolitical ramifications of the invasion, Israelis are taking stock of how exactly Ukraine found itself in a state of gradual territorial erosion despite written assurances from foreign powers—including Russia—that no such fate would befall them.

This is especially important for Israel considering that many of the proposed solutions by the United States to the conflict with Palestinians and the Iranian nuclear threat entail pledges that Israeli security will be guaranteed.

Ukraine itself signed on to a memorandum containing such promises soon after the fall of the Soviet Union.

Indeed, the 1994 Budapest Memorandum on Security Assurances, which Ukraine acceded to along with the United States, Britain, and Russia, stipulated that in exchange for signing onto the Non-Proliferation Treaty (NPT) and relinquishing its nuclear arsenal, the signatories committed to “respect the independence and sovereignty and the existing borders of Ukraine.” They also vowed to “refrain from the threat or use of force” that would harm its territorial integrity.

Now that Russia has once again launched a cross-border offensive, Ukraine finds itself in a similar scenario as it did in 2014 when Putin took Crimea by force. After Russia’s illegal annexation, Western democracies, including the United States, UK, France, and Germany, warned that Russia’s actions violated the memorandum. Yet their words were not backed up with firm actions. True, a conscious decision was made by the agreement’s drafters not to include a commitment to respond militarily in the memorandum, but surely Ukraine had hoped for more robust support than it received.

The Budapest signatories’ relatively restrained responses to Russian aggression, consisting primarily of sanctions and the provision of equipment, have allowed Putin to chip away at sovereign Ukrainian territory piece by piece and destabilize it.

Moreover, their unwillingness to generate lasting repercussions for Russia’s breach of the Budapest Memorandum is causing Israel concern. If such agreements are only as valuable as the paper they are signed on—as this crisis demonstrates—what incentive does Israel have to accede to one, even if the United States backs it?

Taking “brave risks for peace”—as Ukraine did in 1994, and as Israel is frequently asked to do—is indeed a noble endeavor. But Israel knows these risks must never come at the expense of a country’s ability to maintain its national security on its own, even when these risks are accompanied by guarantees from its staunchest allies. This latest crisis simply reinforces Israel’s resolve.

Although it does not appear that Israelis and Palestinians are on the verge of jumpstarting peace talks, circumstances could change rather quickly, as the Biden administration has repeatedly voiced support for a two-state solution to the conflict. Likewise, the Biden-backed negotiations for a renewed Iran nuclear deal are underway in Vienna. Both of these possibilities would undoubtedly require some form of international (primarily American) assurances should they come to fruition.

Regardless of what eventually happens in the Iranian or Palestinian arenas, Israelis are already recognizing the valuable lessons this episode is imparting.

Firstly, Israel realizes it cannot afford to make the naïve mistake Ukraine did when it believed Russia’s conciliatory tones. International relations are rife with examples of weak countries adopting peaceful rhetoric only to become aggressive once they become powerful. In the 1990s, the Russians appeared to seek peace, and perhaps they truly were. But in the span of merely two decades, the tables have turned dramatically. Israelis understand that any agreement it enters to achieve peace with Palestinians or other countries must consider the potential for weak adversaries to become stronger later on.

Similarly, Israel knows it cannot acquiesce to significant irreversible concessions, unlike Ukraine’s decision to surrender its nuclear arms—the most effective deterrent against a potential Russian.

Considering the hostility of its neighbors, Israel is resolute to avoid the tactical errors that have left Ukraine with few realistic options to defend itself. Allies are absolutely indispensable for any country, and outside assurances should be more than welcomed. But they must never be the quintessential element of a country’s national security. Israel is exceedingly aware of this reality, perhaps now more than ever.

Eitan Fischberger is an international relations and Middle East analyst focusing on Israel. His writing has appeared in National Review, NBC News THINK, New York Daily News, and more. He tweets at @EFischberger.