Why Is Joe Biden Ignoring Colombia? 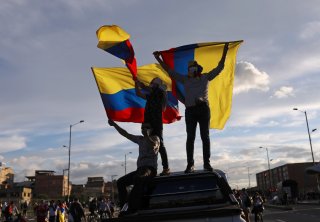 The United States has counted Colombia among its strongest allies in the Western Hemisphere. We cannot afford to let the bilateral relationship deteriorate. Sadly, the Biden administration appears to be taking deliberate steps to weaken the government of President Iván Duque. If the bilateral relationship deteriorates, it will undermine both U.S. and Colombian national interests, as well as broader regional interests.

This is particularly worrisome because, in addition to the endemic challenges in the region such as the lack of economic freedom, China poses a serious threat to a free, safe, and prosperous future for the Western Hemisphere.

Twenty years ago, Colombia was practically a failed state. But over the last two decades, it has become a vibrant democracy with a thriving economy.

It has also been a valuable partner in dealing with the socialist regime in Venezuela. Today, it hosts over two million Venezuelans who have fled Maduro’s nightmarish rule—greatly easing the pressure of illegal immigration. The Colombian military also trains regional security forces in combatting criminal enterprises—an essential job that would otherwise have to be done at the expense of the American taxpayer.

But narco-terrorism has returned to Colombia with a vengeance. Violent criminal gangs, augmented by holdover leftist guerilla and terrorist groups affiliated with Cuba and Venezuela, have made Colombia the world’s top producer of cocaine and the source of 91% of the cocaine seized in the U.S.

Many of the current troubles stem from the failed policies of the Obama administration. When Álvaro Uribe assumed the Colombian presidency in 2002, he inherited a state in utter disarray. But by working closely with the U.S. military, he successfully implemented the counter-insurgency “Plan Colombia.” The results were impressive. Murder, inflation, unemployment rates, and poverty fell dramatically. Economic growth, exports, and investment expanded.  Business confidence soared.  Civil society under democratic institutions flourished. The Revolutionary Armed Forces of Colombia (FARC) and the National Liberation Army (ELN) were held at bay.

But when the presidency transitioned to former defense minister Juan Manual Santos in 2010, some of those hard-fought gains began to erode.  Under pressure from the Obama administration, Santos agreed to enter into “negotiations” with the FARC in Havana.  The Castro regime sponsored these talks.  Santos essentially let the FARC and the ELN off the hook.  Furthermore, a United Nations study found that, during the years 2012-2017, cocaine production soared by more than 250 percent.

As soon as Duque won the presidency in 2018, the FARC, ELN, and other leftist groups (as well as narco-criminal gangs backed by the Maduro regime) launched a coordinated and continuous campaign to undermine the new government.

Nationwide anti-government protests organized by a shadowy umbrella group called the National Strike Committee began in November 2019. As the pandemic crippled the economy and unemployment soared, these protests grew in size.

This April, when the Duque government proposed tax hikes, a new round of protests began. Infiltrated by anti-democratic groups, the once peaceful protests soon turned violent. On May 11, the government reported that 41 civilians and one police officer had died in these clashes.  More than 800 police officers have been injured. The now-deadly protests are eroding Colombia’s democratic stability and allowing drug trafficking to flourish.

The Left alleges that police have used excessive force in dealing with protesters. An official investigation of those charges is underway. Yet, instead of waiting for the results of that investigation, the Biden administration seems to have taken the allegations as fact and begun disengaging with Bogota.

The Administration is now considering cutting security assistance to Colombia and has shown no initiative in cooperating with regional security services. This knee-jerk response to the allegations undermines both U.S. and Colombian interests and compromises regional stability.

The Biden administration says its approach is consistent with its human rights strategy. Yet there is no consistent strategy evident. Just ask the Uighurs.

If the administration is truly interested in advancing human rights in Colombia, this can best be accomplished by cooperating with regional security services, not by disengaging and shunning them. U.S. disengagement only plays into the hands of those seeking to undermine Colombia’s democratically elected government.

Abandoning the legitimate government of Colombia would immeasurably undermine human rights and public safety in the country. It would also open more doors for Chinese influence to spread in Colombia and throughout the hemisphere. Before a complete economic and political collapse of Colombia emerges, the Biden team needs to reverse course. It should oppose those who are actually eroding Colombia’s gains and stand with those who are trying to save their country.

This is no time to revive the failed legacy of the Obama presidency in Latin America. The Biden administration needs to weigh carefully its actions if Colombia is to be spared from further political and economic deterioration.

Kiron Skinner is a former director of policy planning at the U.S. State Department. David Shedd is a former acting director of the Defense Intelligence Agency. Both are visiting fellows at The Heritage Foundation’s Davis Institute for National Security and Foreign Policy, which is directed by Heritage Vice President James Jay Carafano.