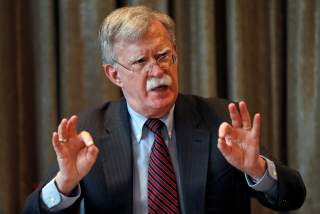 National security adviser John Bolton made an extraordinary promise while on a visit to London Monday, pledging that the United Kingdom would jump to the “front of the queue” for trade with the United States if it went ahead and left the European Union.

Already, some are concerned that the promise of such trade favoritism might prompt an inevitable no-deal Brexit, the kind U.K. officials have long hoped to avoid.

“If that’s the decision of the British government we will support it enthusiastically, and that’s what I’m trying to convey. We’re with you, we’re with you,” Bolton told reporters on the first day of his two-day visit.

He emphasized that the United States didn’t want to pressure the U.K. to leave the EU (in an arrangement dubbed “Brexit”), but to support it in doing so. The U.K. voted in 2016 to leave the EU, but has thus far failed to get a deal passed in Parliament.

Bolton’s gesture was not met with smiles on all fronts — an op-ed in The Guardian pointed out on Tuesday that the offer was actually a move to colonize the U.K., and another in The Independent called the national security adviser “a snake.”

Prime Minister Theresa May tried and failed, repeatedly, to get a deal passed, and now, Prime Minister Boris Johnson has until October 31 to reach a deal. If he fails to do so, then the U.K. will find itself in a “no-deal” Brexit, which will throw things further into chaos, notably trade at the border of Northern Ireland (which is in the U.K.) and the Republic of Ireland (which is in the EU.)

Johnson would like the EU to renegotiate elements of the deal, but Brussels so far has refused to do so — as it did when May repeatedly made the same request. It is now up to the U.K. to figure out how to make Brexit work within its own laws and regulations.

President Donald Trump, who is not a fan of multilateral agreements, has been a Brexiteer from the jump. He also openly chastised May for her failure to pass a deal in Parliament.

In saying that the United States would support the U.K.’s departure from the EU but not a decision to remain, Bolton is stating a policy. For a national security adviser to make trade policy promises on the premise that a country make a major policy change, is remarkable.

The United States, meanwhile, remains embroiled in a trade war with China, with tariffs and counter-tariffs flying, and almost nothing happening in the way of negotiations.

Trump’s landmark trade deal is also at a standstill. The USMCA, which was to replace NAFTA — the longstanding agreement between the United States, Mexico, and Canada — has yet to be ratified, and as of now, is dying on the vine.

There is, of course, room for improvement, even in an already strong relationship between the United States and U.K. But there’s also healthy skepticism about what the Trump administration may want in return.

“This is a highly transactional administration,” said Jack Straw, former foreign secretary under Prime Minister Tony Blair, in an interview with the BBC’s Radio 4 on Tuesday.

He added, “You don’t get something for nothing.”

Indeed, the Trump administration might have already tipped its hand on this one.

In February, the administration published its objectives for trade with the U.K. moving forward. Those objectives speak to a weak post-Brexit U.K. that would have to bring itself in line with U.S. regulations — something that won’t be in the interests of a U.K. that will still want to trade with the EU.

This article originally appeared on ThinkProgress on August 13, 2019.