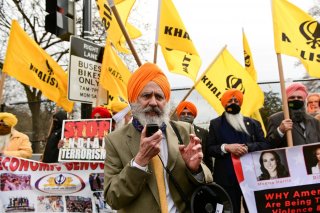 India has long suffered from separatist movements, e.g., Nagaland and Mizoram in the northeast and Kashmir and Punjab in the northwest. Amongst them, Punjab’s Khalistan insurgency was the bloodiest and most dangerous. Between 1980 and 2000, in the Khalistan insurgency, 11,694 civilians, 1,784 security forces, and 8,069 militants died. The Khalistan movement aimed at the creation of an independent state, namely Khalistan. Massively supported by Pakistan, it was Pakistani General Muhammad Zia-ul-Haq’s strategy to bleed India through “a thousand cuts” to avenge the defeat of the 1971 war. The movement petered out by the early 1990s; however, lately, it has been on the upswing again.

What is the Khalistan Movement?

The Khalistan movement is based on the idea that Sikhs form a separate nation, primarily inspired by and modeled after Muhammad Ali Jinnah’s idea of Muslims constituting a separate country, which ultimately led to Pakistan’s creation. Khalistan ideologues have a strong faith in the myth of Sikhs being a martial race that established an empire extending from Kashmir to Afghanistan. However, expanding British imperialism crushed the Sikh empire, which the Khalistan movement, in some way, wants to revive. In the 1970s, Punjab-based Khalistan ideologues, with Pakistan’s Inter-Services Intelligence (ISI) support, were laying a firm groundwork with Jarnail Singh Bhindranwale as their face.

Indian Prime Minister Indira Gandhi’s opportunistic electoral politics further paved the way for their rise. Finally, Operation Blue Star (1984), India’s massive military crackdown on the Sikhs’ holiest shrine, Golden Temple (Amritsar), to flush out holed-up Khalistani militants turned things bitter, hurting the religious sentiments of ordinary Sikhs. Besides, many innocent civilians, being used as shields by the militants, also died in the military operation. The resentment culminated in the assassination of Indira Gandhi by Khalistan militants. In the backlash, bloody riots gripped Delhi, with many congress leaders playing a lynchpin role. According to the official estimates, 2,733 persons, mostly Sikhs, were killed in the riots. With this carnage began the most violent and brutal phase of Khalistan terrorism.

By the early 1990s, its most violent phase was crushed by India’s police forces under the capable leadership of Kanwar Pal Singh (KPS) Gill. Gradually, the Sikhs were back in the national mainstream. The militancy itself was crushed under the leadership of the then Chief Minister of Punjab, Beant Singh, and the state Police Chief KPS Gill, both Sikhs. Later, Manmohan Singh, the Cambridge-returned Sikh economist, served India as prime minister for ten years.

On a closer look, it appears that the Khalistan movement was, from its inception, a non-starter. Abetted by Pakistan and fueled by some contemporary grievances, the movement got traction. However, it was bound to shatter in the long run because it stood on a fallacious ideology and deceitful propaganda, discussed later in the essay.

By the early 1990s, its most violent phase ended. It petered out in the mainland Punjab; however, it continued to survive in a fledgling state in the western countries among the Sikh diaspora communities. Many Khalistan leaders settled in Canada, the United States, and Western Europe and sustained the movement. Pakistan continued to support the Khalistan movement in the west. In 2007, Khalistan leader Gurpatwant Singh started the “Sikhs For Justice” (SFJ) forum to conduct “Referendum 2020“ (a referendum among the global Sikh community by 2020 to decide upon the separate homeland). In mainland Punjab, since 2015, its terror activities are seeing a revival. After the removal of Kashmir’s special status, Pakistan has intensified its activities to link Khalistan terrorism with Kashmir-centric terror groups especially, Jaish-e-Mohammad, the group responsible for the 2019 Pulwama attack, leading to the death of forty Indian soldiers and bringing India and Pakistan to the verge of war. The current disaffection among farmers due to state curtailing subsidies under the new agricultural reforms gives space to the Khalistan movement.

What is the Bigger Danger?

The Khalistan movement in its new avatar is even more dangerous because it is projecting an image of a secular and liberal movement of a Sikh minority fighting against India’s oppressive Hindu majority for its right to self-determination. Further, the SFJ, by lending support to Kashmir separatism and some of India’s populist civil rights movements with dubious ties to Islamist groups and Khalistani groups, is projecting an image of a civil rights movement with firm beliefs in Western liberal values. However, at its core, it continues to be a violent and extremist movement with no tolerance for liberal values like free speech, multiculturalism, democracy, and human rights.

This piece intends to debunk two powerful myths associated with Khalistan 2.0, giving it a degree of legitimacy among the religious Sikhs and the secular civil rights activists. The first myth is that the movement is rooted in Sikhism, fighting for its followers who are facing an existential threat from Hindu nationalism. The second myth is that the movement has firm faith in liberal values.

Since its inception, Khalistan’s key ideologues and leaders, and their Pakistani intelligence masterminds aimed to sever Sikhism’s ties with Hinduism, model it on the lines of Abrahamic religions, and create a separate homeland on Pakistan’s pattern. However, there cannot be a more blatant denial of Sikhism’s roots as Sikhism is intertwined with the mainstream Indic traditions such as Hinduism, Buddhism, Jainism, and the liberal Sufi Islam.

The first Sikh master, Guru Nanak Dev, was one of the many Hindu saints who flourished in the Hindu Bhakti movement, which birthed as a Hindu resistance movement against the onslaught of fanatical Islamism manifesting in territorial acquisitions, forceful conversions, and temple demolitions (see History of Medieval India by Satish Chandra). He was from the Nirgun tradition of the Bhakti movement, which believed in the worship of a formless divinity viz. Brahman of the Vedantic and Upanishadic cosmology, for the ultimate goal of self-realization. Guru Granth Sahib is replete with several references to the Hindu chant of “Om.” It says “ek omkar satnam“ (Omkar is the eternal truth). Monks of multiple faiths, castes, and sects have written verses in that. A few names include Kabir, Dhanna, Sen, Pipa (lower caste Hindu saints), and Miya Mir, a Sufi Muslim saint, clearly reflecting the multicultural and tolerant values of Sikhism as opposed to intolerance and militant persecution of non-Sikhs practiced by Khalistani terrorists.

Most of the Sikh gurus were born in Hindu Khatri trader families and worshipped Hindu deities like Rama, Krishna, and Kali. In the Khalsa fraternity, the militant Sikh group founded by the last master Guru Govind Singh, for Hindus, it was mandatory to devote one of their sons. Banda Bahadur, an accomplice of Guru Govind Singh, who established the first Sikh principality, was born in a Hindu Dogra Rajput caste.

Maharaja Ranjit Singh, the founder of the Sikh kingdom, had Hindu deities on his flag. The first Sikh kingdom of Maharaja Ranjit Singh was not a religious state based on bigotry and intolerance towards other communities. Maharaja Ranjit Singh was a secular man who employed people from all faiths, including the Muslims and all religions, in his army. The soldiers came from far-off places like Orissa, Uttar Pradesh, and Bihar. Hindus and Muslims served in high positions. He maintained Asia’s second-best army trained by the French military officers (see History of the Sikhs (1469-1839) by Khushwant Singh).

The Khalistan movement is also a planned and deliberate attempt to delink Sikhs from their Hindu roots and unleash the process of modeling Sikhism on the pattern of political Islam. However, Sikhism has hardly anything in common with it. Initially, it was a spiritual movement. Guru Nanak Dev never intended to create a separate religious order. Unlike Islam, in Sikhism, there is no precedent of a religious state like Abu Bakr al-Baghdadi’s caliphate or the Islamic Republic of Iran. Sikhism has no jurisprudence system to run the state and administrative affairs or an institution of Caliph to lead the Sikh religious order. There is no centralized church. Guru Govind Singh was the last guru; however, it was never stated that his word was God’s last word, as in Prophet Muhammad’s case. Further, even the martial Khalsa tradition arrived in Sikhism by accident due to Mughal persecution.

Besides, the fanatic Mughal kings were also persecuting Brahmins and forcibly converting them to Islam. Against the above-mentioned brutalities, and in particular, the persecution of Brahmins, Guru Govind Singh started the Khalsa sect, the militant wing, to fight the Mughal armies. As a result, Sikhism came to be known as the sword arm of Hinduism. Later, the Namdhari Sikh group started the first cow-protection movement in the 1870s. During the riots of 1947, also, along with Hindus, thousands of Sikhs were butchered by Muslim rioters in Pakistan, and they were forced to migrate to India. Even today, Hindus and Sikhs worship common deities like Vaishno Devi. Sikhs have fought against Pakistan in all the wars that India fought. Thus, Sikhs and Hindus have a long history of bonhomie and shared suffering at the hands of fanatical Islamist forces.