Why Linda Thomas-Greenfield Is A Great Pick for the UN 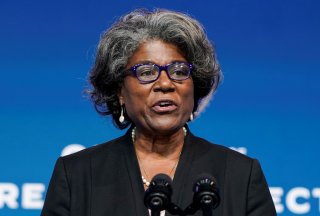 If my thirty-three years as a U.S. diplomat have taught me anything, it’s that diplomacy is a force-multiplier for America’s influence around the world. While our military, economic, and cultural tools are powerful, diplomacy is the way that we channel these advantages into positive outcomes. And there is no bigger stage for diplomacy than the United Nations. Having worked directly on UN issues during my State Department career,  I know that having the right person at the head of our mission in New York can make the difference between an effective policy and one that falls flat.

That is why I was so pleased to learn that President Joe Biden chose Linda Thomas-Greenfield to be America’s next ambassador to the United Nations. A superstar among diplomats, she is the right woman, at the right time, to take on the crucial job of repairing the country’s relations with the world and multiplying its influence.

For me, the clearest demonstration of the value of diplomacy came during my tenure as our ambassador in Tunisia, when protests against political oppression, nepotism, and corruption kicked off the Arab Spring. Revolutions, demonstrations, and civil wars spread across North Africa and the Middle East, including neighboring Libya. Waves of refugees and migrants fled into Tunisia, seeking safety from the brewing civil war. If these people did not receive proper care, then a humanitarian and political disaster would have ensued.

This wasn’t a problem that military force, economic might, or cultural values alone could solve.  Instead, it took the hard work of cooperation and diplomacy. The UN and its related agencies stepped into the breach and helped coordinate an effective response.  The international community—governments and humanitarian organizations alike—responded to the UN’s urgent appeal for financial and logistical assistance.  Working closely with the willing but stretched Tunisian government, the UN, the United States, and nongovernmental organizations successfully turned a situation that could have been a powder keg into a more managed and controlled migration.

My experience in Tunisia showcased what I consider to be the strong points of diplomacy: the capacity to organize in the face of the unexpected, the ability to build and maintain partnerships, and a concern for the dignity and well-being of everyday people. And these are precisely the qualities that characterize Linda Thomas-Greenfield.

First, she had to confront adversity and unexpected situations multiple times in her career and in her life. Thomas-Greenfield has credited her mother with teaching her the value of building up a resistance to adversity. When she became a college student at LSU, she had to endure the likes of David Duke, former Grand Wizard of the Ku Klux Klan. Her diplomatic career has been peppered with rising above challenges. Thomas-Greenfield served in Rwanda during the genocide against the Tutsis and was almost killed in the process.  In 2008, she became the ambassador to Liberia, a country that was emerging from a long civil war and elected Africa’s first female president. She later led the State Department’s Africa bureau, helping craft its effective response to the Ebola pandemic.

Second, she is a practiced and careful multilateralist. Thomas-Greenfield has served at the highest levels of the State Department, in part due to her ability to build coalitions to get tough reforms done. She has already served in Geneva, working to promote U.S. interests with the UN agencies based there. Most importantly, during her time at the State Department, she was one of the first to recognize and advocate for solutions to the department’s glaring diversity problem—and has since laid out a compelling vision for how we can rejuvenate the department.

Finally, Thomas-Greenfield has made a real concern for the lives of people a centerpiece of her career. Known for her brand of people-centric “gumbo diplomacy,” she brought a real concern for human rights and the tangible effects of American diplomacy to her tenure as deputy assistant secretary of state for population, refugees, and migration. This concern for our values, and for the ways that American policy can improve lives around the world, is among the core reasons that I will be proud to have her represent our country in New York.

As a diplomat, there are few higher honors than being nominated to serve your country as an ambassador. And among ambassadorships, there are none that carry greater meaning and responsibility than that for the United Nations. America needs someone there who represents the best of U.S. diplomacy—and that is why the Senate should confirm Thomas-Greenfield without delay.

Gordon Gray is the chief operating officer at the Center for American Progress. He was a career foreign service officer who served as U.S. ambassador to Tunisia at the start of the Arab Spring and as Deputy Assistant Secretary of State for Near Eastern Affairs.