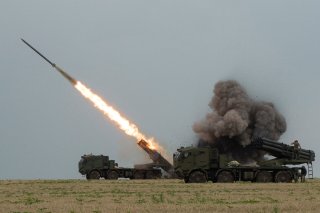 Russian rocket and missile strikes have killed hundreds if not thousands of Ukrainian children, families, and non-combatants, yet these attacks remain difficult to defend against.

Both guided and unguided missiles and rockets, many of them capable of traveling several hundred miles, were fired in what may have been a campaign to terrorize Ukrainian civilians and somehow erode their will to resist. While Ukrainians continue to resist, these Russian attacks have devastated communities throughout Ukraine.

Without air superiority or the ability to destroy weapons within Russia, long-range, ground-fired rockets may be Ukraine’s only hope of stopping these attacks. This reality is likely why Ukrainian president Volodymyr Zelensky requested Multiple Launch Rocket Systems (MLRS) during the early days of the war. There are many reasons why these systems are relevant and critical for combat, but Zelensky may have been specifically thinking of the need to destroy the launchers wreaking havoc on Ukraine. If Russian missile and rocket launchers cannot be destroyed from the air, ground-fired weapons with the range to hit the launchers are critical. While Ukraine had artillery before the war and has received more from the West in recent months, Ukrainian forces need longer-range weapons to destroy those Russian launchers.

Now, MLRS and GPS-guided Guided Multiple Launch Rocket Systems (GMLRS) have arrived. With these systems, Ukraine has been destroying tactically vital Russian targets for several months, hitting supply lines, troop concentrations, command and control facilities, and, of course, Russian rocket and missile launchers. MLRS and GMLRS systems, many of which have more than twice the range of traditional artillery, have allowed Ukrainian forces to hit critical Russian targets from safer, stand-off ranges.

It is widely known that Ukraine has benefitted from NATO surveillance assets as well as its own reconnaissance and intelligence. While Ukraine may have been aware of where some of these Russian launchers were, it could not hit them without longer-range capabilities. Now that Ukraine has longer-range rockets, Russia’s launchers can be neutralized. Statistics published on September 2 by the Ukrainian Ministry of Defense provide evidence to support this. According to recently released figures, the Ukrainian military has destroyed 1,126 Russian artillery systems, 153 anti-aircraft systems, and 289 MLRS.