Why the Marines Love Their LAV-25 "Destroyers" 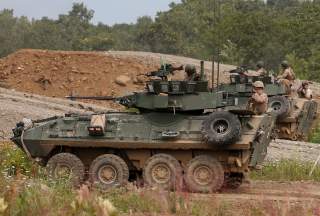 Key point: The LAV-25 has served in many conflicts and proven its usefulness.

The LAV-25, the U.S. Marine Corps’ main armored reconnaissance vehicle, has its origins in an effort to develop a new, highly mobile strike force for the Middle East. Fast, lightly armored and armed with a Bushmaster chain gun, the LAV acts as the marines’ cavalry, scouting ahead of other friendly forces and seeking out the enemy. Over the past thirty-five years the nearly 1,000 LAVs have served from Panama to Iraq, where it earned the nickname “The Destroyer.”

In 1980 it was clear the political situation in the Middle East was deteriorating. Citing the Iranian revolution and the Soviet invasion of Afghanistan, the Carter administration established the so-called Rapid Deployment Force (RDF). Designed to quickly deploy U.S. air, sea and land forces across the world into the Middle East, the RDF (which later evolved into U.S. Central Command) demanded strategic mobility and firepower.

The U.S. Army and Marine Corps examined a new generation of light armored vehicles that could be used to equip their contributions to the RDF, including the AAI RDF/LT, or Rapid Deployment Force Light Tank, equipped with the ARES 75-millimeter automatic cannon, dune buggies armed with TOW missiles and heavy machine guns, and the new M1047 LAV. Based on the GM Canada Light Armored Vehicle, itself based on the Swiss Mowag Piranha, the M1047 was an eight-by-eight wheeled armored vehicle with a turret armed with a 25-millimeter Bushmaster automatic cannon and a 7.62-millimeter medium machine gun.

While the army declined to adopt the M1047 the Marine Corps embraced the new vehicle. The marines would use what they called the LAV-25 as an infantry fighting vehicle, a kind of Bradley lite, and made room for six infantrymen to sit inside. The Marines created four Light Armored Vehicle battalions, one per marine division.

The LAV was designed for both strategic and tactical mobility, giving marines the edge in so-called maneuver warfare theory, a form of tactics widely adopted by the U.S. Marine Corps in the 1980s. Maneuver warfare theory emphasized the ability to outmaneuver enemy forces over firepower to win battles and the LAV epitomized that ability. The LAV has a road speed of sixty-two miles an hour, allowing it to travel swiftly down roads, thanks to a 275 horsepower turbocharged diesel engine. It was fully amphibious, and with the attachment of a trim vane could do six-and-a-half miles an hour in the water. The vehicle could be carried by C-5, C-141, C-17 and C-130 transport aircraft, and could even be lifted by a CH-53E Sea Stallion Helicopter.

In addition to the base LAV-25 model, the Marines purchased six other LAV variants. The LAV-C2 serves as a mobile command post and communications vehicle for the LAV battalions. The LAV-C2 deletes the vehicle turret and Bushmaster gun and instead has a raised passenger cabin and positions for radio operators. Another version, the LAV-L (Logistics) is similar but is designed with an empty passenger area to accommodate up to three tons of palletized equipment, particularly ammunition. Unlike the LAV-C2, the LAV-L is armed with a 7.62-millimeter machine gun.

The LAV occupies a middle ground between the Marine Corps’ fleet of heavy tanks and lighter Humvees, and as a result the LAV fleet needed its own recovery vehicle to recover damaged and disabled vehicles. The LAV-L has a hydraulic crane rated for loads up to 6,600 pounds and a 30,000 pound winch for pulling vehicles out of mud, trenches, and other hazardous ground conditions.

The LAV-25 first saw combat in Panama in 1989, when provocations by the government of General Manuel Noriega against the United States forced the Pentagon to dispatch the marines to beef up security. LAVs further saw combat in the U.S. invasion of the country in August. The LAVs’ mobility allowed it to roll quickly down the streets of Panama and even cross the Canal in amphibious mode.

In 1990 the 1st Marine Division’s LAV battalion deployed to Saudi Arabia, where it served in Operation Desert Shield and Desert Storm. LAVs were typically used in the screening role, identifying Iraqi forces ahead of the rest of the division, although they were occasionally used in pitched battles when the Iraqis unexpectedly attacked, particularly at the Battle of Khafji. Although the LAVs generally faced heavier Iraqi T-55, T-62 and T-72 tanks, LAV-AT vehicles could handle the heavier vehicles while those armed with 25-millimeter Bushmaster guns engaged lightly armored Iraqi armored personnel carriers, unarmored vehicles, and dismounted Iraqi personnel. Crews even discovered that their 25-millimeter armor piercing rounds could penetrate the flank and rear armor of T-55 tanks.

In 2003 LAVs participated in the invasion of Iraq. LAVs had been redesignated light armored reconnaissance battalions in the mid-1990s, a more appropriate description for units that barely had any infantry and scouted ahead of larger, heavier marine forces. LAV units took part in the initial invasion and subsequent counterinsurgency efforts aimed at eliminating local insurgents, who allegedly nicknamed them “Destroyers.” Their smaller size and use of tracks instead of wheels made them quieter and more capable of surprising enemy forces. LAVs have also deployed in Afghanistan and were part of the initial wave of ground troops in 2002. LAVs accompanied marines in Helmand province and elsewhere, providing fire support and screening for the infantry.

In the mid-2000s, the remaining 893-strong LAV fleet underwent a series of upgrades to bring the vehicles up to a new A2 standard. The LAV-25A2 included improved armor protection (up to 14.5-millimeter heavy machine guns) both inside and outside the vehicle, improved suspension, a new fire suppression system, and a new Improved Thermal Sight System for the commander and gunner.

The LAV series of vehicles will probably continue in service for the foreseeable future. Although the new generation of wheeled armored vehicles such as ST Engineering’s Terrex and France’s VBCI are more modern than the nearly thirty year old LAV, few if any offer better armored protection. As always, the enemy gets a vote: the old standard for enemy vehicle threats, the 14.5-millimeter heavy machine is gradually replaced by the 30-millimeter automatic cannon equipping Russia’s new Bumerang wheeled armored vehicles. Countering that threat might necessitate an entirely new vehicle. If so, America has already gotten more than its money’s worth from the LAV series of vehicles.