Why Mexico Needs to Demilitarize the "War on Drugs" 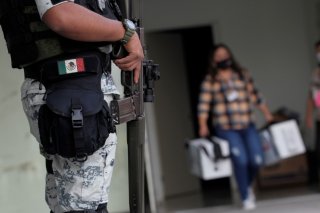 After fifteen years of soaring murder rates, corruption in public institutions, and human rights violations, the War on Drugs represents an ignominious defeat for the Mexican State. Most importantly, while drug trafficking organizations continue to threaten the country's national security, decisionmakers and researchers still have more questions than certainties on how to tackle this conundrum.

One of the central dilemmas that arose in the early stages of the conflict, was which instruments to use in countering the increasingly powerful drug trafficking organizations. Most police institutions were under the control of 32 different governors and more than 1,800 municipalities. Furthermore, the national security force, the Federal Police, had only 6,500 officers for a country of over 100 million people. On the other hand, the government had the military, a centralized and traditional institution with over 200,000 soldiers.

At the crossroads of the early 2000s, the incentives favored a military approach to the drug cartel challenge. Nevertheless, as the levels of violence increased and human rights violations became widespread, domestic and international voices started to oppose the military's involvement in the conflict fiercely. Subsequent governments answered the criticism with attempts at police reform which had mediocre results. Faced with intense violence and overwhelmed police forces, governments opted to continue using the military as their primary tool to counter the cartels.

The creation of the National Guard (Guardia Nacional) in 2019, under President Andrés Manuel López Obrador (AMLO), was an attempt to fill the security gap between the police and the military. The idea was to create a hybrid security force capable of countering new threats, but also protecting human rights and conducting criminal intelligence. Paradoxically, two years after its creation, the Armed Forces continue to perform the central role in Mexico's internal security and several analysts argue that the creation of the new force has deepened the militaristic approach.

So, has the National Guard effectively decreased the militarization like López Obrador first envisioned? Or, on the contrary, it has worsened an already dysfunctional strategy? With mixed results and many accusations, the National Guard is an ambivalent force in Mexican security.

By the time President Enrique Peña Nieto, took office in 2012, the War on Drugs strategy had submerged the country in the highest levels of violence it had seen since the Mexican Revolution of 1910. The rapid escalation led to several cases that appalled the Mexican public. For instance, in 2011, Los Zetas Cartel sprayed one of Monterrey's largest casinos with gasoline and set it on fire, killing fifty-two innocent people. Moreover, many of the abuses against civilians came from government forces, like the 2011 killing of two students by the police in Ayotzinapa. In this context of social exhaustion, Peña Nieto promised a renewed approach to the security crisis based on crime prevention, human rights protection, and the creation of a gendarmerie. However, the new force never really found its place in internal security, taking peripheral roles like tourist safety. Simultaneously, the Army and the Navy continued to cement their power as the central actors in Mexican security. By 2016, the Armed Forces had a presence in twenty-four states, more than seventy-five of the federation, and the Government had created new security institutions under military command, like the military and naval police.

During the 2018 presidential campaign, the leftist candidate López Obrador promised a drastic shift in Mexico's security approach under the slogan "Abrazos, no balazos" (Hugs, not bullets). After he won the election, he proposed his National Peace and Security Plan. The initiative included many soft power solutions but some hard power ones, primarily, creating a National Guard. This meant a militarized security force of at least 50,000 members enlisted from the Armed Forces, Federal Police, and new recruits. Most importantly, the aim was to displace the military of their role in internal security and move away from the war paradigm and shift towards a peacekeeping one.

The National Guard became operational in June 2019, with the mission of “protecting the life, integrity, security, property, and rights of citizens, as well as preserving their freedoms.” With its creation, the new force absorbed the existing national civilian security forces and the military security forces. By the end of 2020, its agents numbered almost 100,000 in 32 states and with 100 barracks. Seventy percent of their members come from the Armed Forces.

Institutionally, the National Guard is commanded by an Army General but under the civilian authority of the Secretary of Security and Citizen Protection (SSP). Still, the military plays an essential role in supporting the Guard’s operations and strategy. After decades of militarization, it is no surprise that military commanders have an important voice in the security strategy. However, this ambivalence creates tensions that the Government should address.

Despite the relatively successful creation of the National Guard, the vicissitudes and dynamics of international politics made its implementation much more complicated. In particular, President Trump's pressures for stronger border control in Mexico have significantly impacted the plans for this new intermediate force. As soon as López Obrador took office, Trump threatened via Twitter to impose a five percent tariff on all Mexican goods if border action was not taken. This unexpected move hindered the Government's initial plan of using the Guard as the central instrument to deal with the cartels.

As soon as the National Guard became operational, López Obrador had to deploy 21,000 agents to the northern and southern national borders. The objective was to crack down on the immigration flows going from Central America into the U.S. Even though 2018 marked the highest number of murders since the start of the War on Drugs, López Obrador had to balance Mexico's security needs with other domestic pressures. Considering that the U.S. buys forty-seven percent of Mexico's total exports, the imposition of tariffs would have had a devastating effect on its productive sector. This new mission limited the capacity of the National Guard to take a leading role in dealing with drug-related violence. López Obrador responded by signing an executive order that allowed the Armed Forces to continue to perform internal security missions for five more years and to the disappointment of many, the country's demilitarization became less likely in the short term.

But, how do we evaluate what we have seen from the National Guard with a realistic approach? Considering the complexity of the Mexican security crisis, a definitive conclusion about its impact, only two years after its creation, would be incautious. However, an analysis of the available data and trends can help us understand the current situation.

When looking at the major 2020 security statistics, the results are mildly encouraging. Last December, López Obrador announced that the homicide rate for that year had stabilized at 27 per 100,000 with a 0.4% interannual decrease after three years of setting new highs. Additionally, kidnapping and urban insecurity perception also fell. Nonetheless, this is still not enough to jump to conclusions, especially considering that the pandemic affected criminal enterprises across the region. As the Guard continues to operate over the coming years, more data will be generated, facilitating the conditions for analysis.

From an institutional perspective, the results are ambiguous. It is easy to accuse this policy as militaristic when comparing it with the unrealistic campaign promise of "hugs, not bullets." However, it is different if we contextualize it in Mexico's security crisis and the recent experiences with police reform. The creation of a strong and capable National Guard, accompanied by a comprehensive set of social and judicial policies, appears to be the only realistic alternative to using the Armed Forces. Even countries with much lower levels of violence, like Chile with the Carabineros and Argentina with the Gendarmería Nacional, had to resort to similar hybrid forces to address Latin America’s growing security gap.

The National Guard implementation is encountering challenges that should be pointed out by critics and solved by the Government. For instance, 90% of its members have not completed the evaluations necessary to act as security agents in compliance with the National Public Safety Law. Also, the securitization of migration is a big obstacle for the Guard if it wants to take a central role against Mexico's real threats. Most importantly, López Obrador's recent statements that they could become a fourth branch of the Armed Forces is contradictory with initial plans for the National Guard and could definitely end all hopes for a demilitarization process.

Undoubtedly, one organization will not solve a decades-long of security debacle, but based on the domestic and regional experience, its creation was a significant step in the right direction. Mexican decisionmakers should make all the efforts to initiate the force's transition to a completely civilian institution. Simultaneously, the military should progressively retreat from policing missions and replace them with security forces. If this happens, the National Guard will likely become a central instrument in the country's pacification. If not, it will end up as a dependent of the Armed Forces with a negligible impact.

Santiago Previde is a political scientist from Buenos Aires studying at the Johns Hopkins School of Advanced International Studies. He has previously worked in Argentina’s public sector.