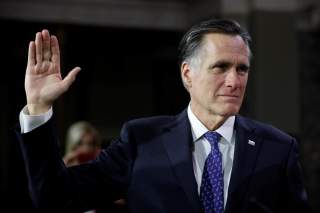 Mitt Romney has been one of few prominent Republicans to criticize Donald Trump, beginning with the 2016 presidential campaign. He did so again in response to Trump’s critical comments about John McCain.

“I can’t understand why the President would, once again, disparage a man as exemplary as my friend John McCain,” Romney tweeted.

Why is Romney staking out a lonely position as a Republican Trump critic?

Among the answers floated by observers are that he still wants to be president or he fundamentally misunderstands how to influence Trump’s political behavior, or both.

To date, though, there has been little mention of Romney’s religion. I’m a scholar who has studied the role of religion in U.S. politics, and I believe Romney’s Mormon faith is central to understanding his concerns about Trump’s character and leadership.

Donald Trump is arguably the least religious president in U.S. history and has displayed a penchant for moral relativism over bedrock beliefs.

Had he won the 2012 presidential campaign, Romney would have arguably been the most religious president ever.

Of course, Romney is personally motivated, politically calculating and pragmatic, like most national political figures. But he is also immensely devout. You cannot fully understand Mitt Romney without recognizing this.

The Church of Jesus Christ of Latter-day Saints (LDS or Mormon) asks adherents to regularly contribute significant amounts of time and resources to the church.

As I document in my book “Mitt Romney, Mormonism, and the 2012 Election,” Romney’s family has deep roots in Mormon history, tracing back to the conversion of his English ancestors 175 years ago. Romney has been a respected religious leader dating back to his mission in France, where he distinguished himself by assuming an expanded leadership role after surviving a deadly car accident, which killed the wife of the mission president.

Romney has particular standing in the state he now represents, after his management of the 2002 Olympics in Utah following a major corruption scandal. This event was a pivotal moment in the development of his political career because it provided national name recognition and revitalized his electoral prospects following a failed Senate bid in Massachusetts.

In 2012, he became the first Mormon presidential nominee of a major party, the centerpiece of the “Mormon Moment,” a term used to describe heightened attention and interest in LDS life within popular culture.

For Mormons, the pursuit of righteousness is an overarching process of overcoming human weakness and moving toward God during one’s life. Being a faithful spouse and good role model for children is essential on earth and beyond as families seek to be sealed together for eternity. And Mormons dedicate around 20 hours per week to various church “callings.”

Trump is not visibly committed to any of these general values, prompting concern among Mormons. Just 14 percent of Utah voters in 2016 viewed Trump as a good role model. That’s a remarkable development considering that until recently, Mormons were the most Republican religious group in America. Nearly 70 percent still identify as “Republican.”

Utah Sen. Mike Lee, a Republican, fought Trump’s nomination all the way to the floor of the 2016 national party convention. Former Sen. Jeff Flake, a Republican from Arizona, was the first member of Congress to call for a primary challenge to the president. Former Utah Rep. Mia Love, a Republican, publicly rebuked the president for his derogatory comments about Haitians and his leadership of the Republican Party. Former Senate Majority Leader Harry Reid, a Nevada Democrat, recently described President Trump as an “amoral” person with “no conscience” who is “without question the worst president we’ve ever had.”

These sentiments echo Romney’s 2016 speech at the University of Utah, during the Republican presidential primary.

Romney said that “dishonesty is Trump’s hallmark” and asked people to consider his defining attributes: “the bullying, the greed, the showing off, the misogyny, the absurd third grade theatrics.”

“Imagine your children and your grandchildren acting the way he does,” said Romney, adding that he encouraged Republican primary voters to choose anyone but Donald Trump.

Over the last two years, Romney criticized Trump’s comments on Charlottesville, where Trump suggested “both sides,” Neo-Nazis and their critics, were to blame for violence.

Those comments “caused racists to rejoice,” Romney said. And he described the Trump administration’s policy of separating immigrant families at the border as an “inexcusible” and “dark chapter in American history.”

Romney has also criticized Trump on foreign affairs, race relations, the role of the press, and on his disparagement of John McCain. He has called Trump’s handling of meetings with Vladimir Putin “inappropriate” and described the president’s response to Russian meddling in American’s electoral process as “disgraceful and detrimental to our democratic principles.”

Romney has stated that “no American president has ever before vilified the American press as an ‘Enemy of the People.’” While recognizing this can benefit conservative politics, Romney expressed concern that “denigrating the media diminishes an institution that is critical to democracy, both here and abroad.”

Before no love lost

Romney has not uniformly opposed Trump. He accepted Trump’s endorsement in 2012 and was interviewed to be Trump’s secretary of state in 2016.

This is a bit simplistic.

In my opinion, Romney now holds the best-elected position he could hope for. He represents the most distinctive Mormon subculture in the world and can probably do so as long as he wants. Romney has also made clear he has no interest in running for president again.

Utah residents hold him in much higher regard than President Trump, so he can be relatively unconcerned with a primary challenge, which would not happen for five years anyhow.

And 54 percent of Utah residents support Romney’s criticism of the president, though 51 percent of Republicans do not.

“I know what my principles are,” Romney said, in defending his op-ed in The Washington Post, in which he wrote that Trump’s character is insufficient for a U.S. president.

But I believe that as a Mormon and a politician, he will never be comfortable with what he sees as the president’s lack of character and leadership.