Why Must America Prepare to Fight Two Wars Simultaneously? 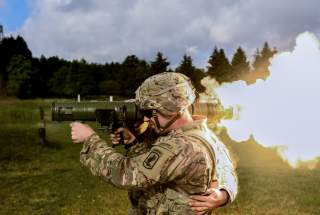 Should the U.S. military be strong enough to fight two major wars simultaneously? Or is such a gargantuan effort more than America should be expected to bear?

A pillar of American defense policy has been the ability of the United States to successfully engage in two major conflicts—think Russia or China—or big regional conflicts like war with North Korea.

Yet the U.S. military lacks the strength to fight two major conflicts simultaneously, according to a report by the Heritage Foundation. The annual report by the conservative think tank, which tends to favor strong defense spending, also rated the U.S. military power as “only marginally able to meet the demands of defending America’s vital national interests.”

Heritage's 2019 Index of U.S. Military Strength does paint a troubling picture of American military capacity. “Overall, the 2019 Index concludes that the current U.S. military force is likely capable of meeting the demands of a single major regional conflict while also attending to various presence and engagement activities but that it would be very hard-pressed to do more and certainly would be ill-equipped to handle two nearly simultaneous major regional contingencies,” according to Heritage. “The limits imposed on defense spending and the programmatic volatility created by continuing resolutions, passed in lieu of formal budgets approved on schedule, have kept the military services small, aging, and under significant pressure. Essential maintenance continues to be deferred, the availability of fewer units for operational deployments increases the frequency and length of deployments, and old equipment continues to be extended while programmed replacements are either delayed or beset by developmental difficulties.”

On a scale of Very Weak to Very Strong, Heritage rated the Army, Navy, Air Force and U.S. nuclear forces as Marginal, with the Marine Corps rated even lower as Weak. Ironically, the Army's score was actually an improvement from Weak to Marginal because of an increase in the number of brigade combat teams. The Marines drew a lower score because “Marine operating forces as a whole continue to average a two-to-one deployment-to-dwell ratio. At this pace, readiness is consumed as quickly as it is built, leaving minimal flexibility to respond to contingencies.”

After cutbacks imposed after the end of the Cold War, twenty years of counterinsurgency operations in Iraq and Afghanistan, and then struggling to reorient back toward a potential “big war” with Russia and China, it's not surprising that the U.S. military has problems.

But perhaps the real question should be: does American need to retain enough military muscle to fight two major wars simultaneously? Most nations would be happy if they could fight one.

Consider what happened to Britain. In 1889, the British government passed the Naval Defense Act, which mandated that the Royal Navy be stronger than the next two largest navies combined (which were France and Russia at the time). The law was a boon to the Royal Navy, which had become the global policeman of the nineteenth century. But as Germany embarked on a battleship-buying binge, and the United States, Russia and Japan built up their navies, Britain simply could not bear the strain of not just having the strongest navy, but a navy so strong that it can defeat two major opponents at the same time.

As Heritage points out, the U.S. military does have issues with readiness and capability. But perhaps the answer isn't to throw more money at a problem that is unsolvable. Perhaps weapons and warfare have become too expensive for the United States to build a military that can battle two major enemies simultaneously. Two wars may be one war too many.