Why The Navy And Coast Guard Want A Robotic Fleet 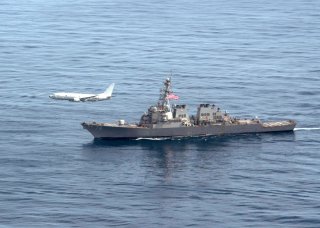 Here's What You Need To Remember: The Navy is getting serious about developing unmanned warships. The fleet has done "a lot of work ... over the last six or seven months" preparing to formalize programs for large, remotely-operated vessels, Rear Adm. William Galinis, the Navy's executive for surface ships, told the Surface Navy Association on Jan. 17, 2019.

The U.S. Navy needs new patrol boats. At the same time, the sailing branch is beginning the process of acquiring a new fleet of robotic warships.

Why not combine the efforts, and loop in the U.S. Coast Guard, too? That's what Navy lieutenant commander Collin Fox asks in the February 2019 issue of Proceedings, the professional journal of the U.S. Naval Institute.

The Navy stations in Bahrain 13 of the 179-feet-long Cyclone-class patrol boats for missions in the shallow Persian Gulf. But the 1990s-vintage Cyclones, or "PCs," are past their expiration date and could decommission in the 2020s as their hulls wear out.

To replace them, the Navy could modify a new type of Coast Guard cutter, transforming it into a robotic patrol boat, Fox proposes.

"Medium displacement unmanned surface vessels are coming to the fleet; but when, how, and what roles they will fill are open questions," Fox writes. "Rather than developing a new MDUSV from scratch, the Navy should take advantage of the requirement to replace the Cyclone-class patrol coastal ships to develop a capable, mature MDUSV—killing two birds with one stone."

The Navy is getting serious about developing unmanned warships. The fleet has done "a lot of work ... over the last six or seven months" preparing to formalize programs for large, remotely-operated vessels, Rear Adm. William Galinis, the Navy's executive for surface ships, told the Surface Navy Association on Jan. 17, 2019.

One is a medium-displacement unmanned surface vessel around the size of the Defense Advanced Research Agency's 132-feet-long experimental Sea Hunter robot ship. The MDUSVs "will act as scouts and decoys, carrying sensors and jammers," Breaking Defense reported.

There's also a larger USV around the size of a conventional corvette, which Breaking Defense claimed would "provide additional punch, loaded with missile launchers but relying on other vessels to find the enemy and relay targeting data."

The Navy wants to award a contract by 2023 for a large USV, Rear Adm. John Neagley, the Navy’s executive for unmanned and small warships, told Breaking Defense. Coincidentally, the Cyclone PCs could begin decommissioning around the same time.

But 2023 is coming up fast. "The Navy needs a replacement PC, or PC(R), that could quickly and cheaply supplement the lower end of the fleet architecture," Fox writes.

The WPC is substantially similar to the existing Cyclone class. The Coast Guard has already commissioned 29 of the planned 58 hulls, with the final delivery planned for 2024. The overall program cost averages $58 million per cutter, though the six vessels funded in the [2017] budget averaged $54 million.

The Navy should latch onto the Coast Guard’s WPC program to acquire a PC(R) that could also serve as a MDUSV development platform and, eventually, a MDUSV. ... A vessel based on the WPC would take advantage of the Coast Guard’s sunk development costs and production learning curve, while also leveraging multiyear procurement to achieve still greater cost savings.

Fox expects there would be complications. "The future MDUSV will undoubtedly require extensive developmental testing and evaluation to mature the overall system while also integrating its capabilities into the fleet," Fox points out.

"Long before the Navy trusts an autonomous MDUSV to navigate a crowded international strait under challenging conditions, it must provide the system’s artificial intelligence with the data from thousands of supervised evolutions—all the more reason to field a mature platform sooner."

"There are other challenges beyond autonomy. The first casualty of critical equipment should happen with an engineer on board, not thousands of miles into an unmanned mission. An MDUSV developed from an existing manned platform will ensure this level of supervision and reduce technical risk, allowing the Navy to incrementally reduce the crew size as the unmanned system components mature."

The Navy apparently agrees with Fox's thinking, and reportedly is planning to configure its new missile frigates as command vessels for future flotillas of robotic warships.

That's what Sam LaGrone, a reporter for USNI News, concluded after reviewing the Navy's March 2019 request for proposals to the U.S. shipbuilding industry for the frigate design.

"The inclusion of the high-bandwidth datalinks on FFG(X) hint at an important role for the class to provide command and control and targeting information to the Navy’s emerging family of unmanned surface vehicles," LaGrone wrote.

If the Navy accepts Fox's proposal even in part and develops a robotic patrol boat to replace the Cyclones, frigates could command and support the new, unmanned PCs until their own A.I. is sufficiently robust to allow fully autonomous operations.

David Axe serves as Defense Editor of the National Interest. He is the author of the graphic novels  War Fix, War Is Boring and Machete Squad. This article appeared last year.