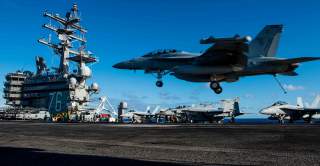 The US Navy had a horror year in 2017 with tragic accidents and a major corruption scandal. While the cause may have been mainly budgetary, with inadequate resources allowed the navy, deeper cultural issues might also be involved.

The US Naval Institute’s Proceedings is the main professional journal for the US Navy. It’s widely read by naval personnel around the world, as well as by academics and others interested in maritime security and naval affairs.

Several articles in the May 2018 issue of Proceedings reflect on events of 2017—an ‘annus horribilis’ for the US Navy. These articles look at the two major issues that made it such a bad year. In the words of one contributor, they were ‘profound failures that shook the American public’s confidence in its Navy’.

The first failure was the so-called Fat Leonard affair, an ongoing investigation into the ship support contractor Glenn Defense Marine Asia, a firm in East Asia run by Leonard Glenn Francis, a Malaysian national known as ‘Fat Leonard’. Francis is alleged to have provided cash, travel expenses, luxury items and prostitutes to numerous American naval officers. In return, the officers provided classified material about the movements of ships and submarines, confidential contracting information, and details of law enforcement investigations. The Washington Post called the scandal ‘perhaps the worst national-security breach of its kind to hit the Navy since the end of the Cold War’.

More than 30 people have been criminally charged in connection with this bribery and corruption scandal. One admiral, several captains and commanders, and some more junior officers have received jail terms. Six admirals have also been disciplined or admonished.

The second major failure was the series of serious aircraft and surface-ship accidents during 2017, including several fatal ones—notably the collisions involving the destroyers USS Fitzgerald and USS John S McCain. Investigations into the two collisions revealed a deplorable lack of good seamanship and sound navigational practice, as well as a breakdown in management and a lack of knowledge of vital bridge systems.

An article in the May issue of Proceedings by a junior naval lieutenant reflects on events of 2017. He claims that the navy needs an honest self-reckoning to address the professional problems it experienced during the year. He bravely argues that the navy suffers from a lack of vision with a focus on procedure rather than people and that senior naval officers are more concerned with government-oriented bureaucracy rather than with maintaining a war footing.

Admiral Swift, the recently retired commander of the Pacific Fleet, has an article in the same issue which proclaims the importance of the fleet as the navy’s basic fighting element with the synergy of its surface, subsurface and air domains. He notes that in his experience, operational commanders, when under stress, revert to the comfort zone of their tactical roots—surface, subsurface or air. That may be so, but it’s the view of a career fighter pilot who may not fully appreciate the problems of the surface ships comprising the fleet.

The US Navy has three main operational schools: submariners, aviators and surface warfare officers. American naval aviators don’t have bridge experience like that of their British and Australian counterparts. And in the case of American naval aviators who fly the navy’s fixed-wing patrol and surveillance aircraft from bases ashore, some might have little, if any, experience at sea.

To some extent, surface warfare officers are the ‘poor cousins’ of the aviation and submarine elites. Senior command positions in the US Navy tend to be held by aviators and submariners. While senior American naval commanders may be highly experienced operationally and strategically, a career aviator may not fully appreciate the problems of the surface fleet.

The Fitzgerald and McCain collisions involved warships crashing around in busy shipping lanes at excessive speed without regard for other users of the sea. This could suggest an attitude of superiority and exceptionalism. The aggressive warrior culture inculcated into all arms of the American military needs to be balanced with some restraint, particularly in peacetime operations at sea. This culture might also breed a failure to learn from past accidents. It’s a persistent worry that the US Navy has been slow to learn from its mistakes.

Another article in the Proceedings, written by a serving US naval captain, is called ‘How we lost the Great Pacific War’. It takes the form of a letter written in the future by the commander of the US Pacific Fleet to the chief of naval operations after the navy had lost a series of naval engagements in the Western Pacific—presumably against China. He finds that the major cause of failure lay in problems of sustainment, poor readiness and a lack of resources. As the letter concludes, ‘We did as well as we could with what we were given.’

This lack of resources and a can-do attitude are common themes both in the Proceedings  and in the investigations into the Fitzgerald and McCain collisions. One Proceedings article by a retired naval captain claims that ‘resource constraints and not leadership failings lie at the heart of the Seventh Fleet’s operational problems’. However, it’s too simple to see the solution just in terms of increasing the navy’s budget. There may also be deeper cultural issues to be addressed.

Sam Bateman is professorial research fellow at the Australian National Centre for Ocean Resources and Security at the University of Wollongong.