Why Is the Navy Planning to Detonate Bombs Near Its Most Deadly Aircraft Carrier Ever? 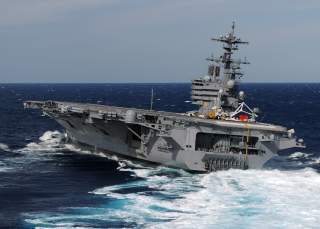 The US Navy is planning to finalize weapons integration on its new USS Ford carrier and explode bombs in various sea conditions near the ship to prepare for major combat on the open seas, service officials said.

Service weapons testers will detonate a wide range of bombs, to include a variety of underwater sea mines to assess the carrier’s ability to withstand enemy attacks. “Shock Trials,” as they are called, are typically one of the final stages in the Navy process designed to bring warships from .development to operational deployment.

“The USS Gerald R. Ford will conduct further trails and testing, culminating in full-ship shock trials. The ship will then work up for deployment in parallel with its initial operational testing and evaluation,” William Couch, an official with Naval Sea Systems Command, told Warrior Maven earlier this year.

Testing how the carrier can hold up to massive nearby explosions will follow what’s called a Post Shakedown Availability involving a final integration of various combat systems.

The Navy’s decision to have shock trials for its first Ford-Class carrier, scheduled for deployment in 2022, seems to be of particular relevance in today’s modern threat environment. In a manner far more threatening than most previously known threats to Navy aircraft carriers, potential adversaries have in recent years been designing and testing weapons specifically engineered to destroy US carriers.

One such threat is the Chinese built DF-21D “carrier killer” anti-ship missile. This weapon, now actively being developed and tested by the Chinese military, can reportedly hit moving carriers at ranges up to 900 nautical miles.

“Strong localized deformations are seen in the deck modes, which different parts of the decks moving at different frequencies from each other,” MITRE writes.

The existence and timing of USS Ford Shock Trials has been the focus of much consideration. Given that post Shock Trial evaluations and damage assessments can result in a need to make modifications to the ship, some Navy developers wanted to save Shock Trials for the second Ford-class carrier, the USS Kennedy. The rationale, according to multiple reports, was to ensure the anticipated USS Ford deployment time frame was not delayed.

However, a directive from Deputy Defense Secretary Patrick Shannahan, following input from the Senate Armed Services Committee, ensured that shock trials will occur on schedule for the USS Ford.

Data analysis following shock trials has, over the years, shown that even small ship component failures can have large consequences.

“A component shock-qualification procedure which ensures the survivability of 99% of the critical components still is not good enough to ensure a ship’s continued operational capability in the aftermath of a nearby underwater explosion,” MITRE writes.

Also, given that the USS Ford is introducing a range of as-of-yet unprecedented carrier-technologies, testing the impact of nearby attacks on the ship may be of greater significance than previous shock trials conducted for other ships.

Several years ago, the Navy announced that the V-22 Osprey will be taking on the Carrier On-Board Delivery mission wherein it will carry forces and equipment on and off carriers while at sea.

Targeting, guidance on the move, fire control, ISR and other assets are necessary for these kinds of weapons to function as advertised. GPS, inertial measurement units, advanced sensors and dual-mode seekers are part of a handful of fast-developing technologies able to address some of these challenges, yet it does not seem clear that long-range anti-ship missiles such as the DF-21D will actually be able to destroy carriers on the move at the described distances.

Furthermore, the Navy is rapidly advancing ship-based defensive weapons, electronic warfare applications, lasers and technologies able to identify and destroy approaching anti-ship cruise missile from ranges beyond the horizon. One such example of this includes the now-deployed Naval Integrated Fire Control – Counter Air system, or NIFC-CA. This technology, which travels in carrier-strike groups, combines ship-based radar and fire control systems with an aerial sensor and dual-mode SM-6 missile to track and destroy approaching threats from beyond-the-horizon.

The Navy is also developing a new carrier-launched tanker, called the MQ-25A Stingray, to extend the combat range of key carrier air-wing assets such as F/A-18 Super Hornets and F-35C Joint Strike Fighters. The range or combat radius of carrier-based fighter jets, therefore, is fundamental to this equation. If an F-35C or F/A-18 can, for instance, only travel roughly 500 or 600 miles to attack an inland enemy target such as air-defenses, installations and infrastructure – how can it effectively project power if threats force it to operate 1,000-miles off shore?

As for a maiden deployment of the USS Ford slated for 2022, Navy officials tell Warrior Maven the ship will likely be sent to wherever it may most be in need, such as the Middle East or Pacific.

The Navy Wants More Ford-Class Aircraft Carriers. But We Don't Even Know If They Work.