Why One Event in History Tells us a U.S.-Iran War Can Still Happen 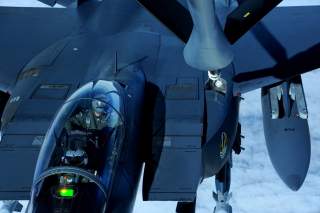 Now that Iran has confessed to shooting down Ukrainian International Airlines 752 (PS752), could the tragedy present an opportunity to de-escalate its conflict with the United States which, just recently, threatened to combust into a major regional conflagration?

History suggests it just might. The incident is highly reminiscent of the downing of Iran Air Flight 655 in 1988, which also occurred during a “hot” phase of the U.S.-Iran conflict and opened the door for an end to the twentieth century’s third-deadliest war.

Early morning of July 3 of that year, the U.S. Navy guided-missile cruiser USS Vincennes (CG-49) had returned to the Persian Gulf after escorting a tanker convoy through the Strait of Hormuz. After receiving reports from a friendly warship of an imminent attack on a commercial vessel, Vincennes, under the command of Captain Will Rogers, headed back towards the Strait, on the way hearing “explosions” coming from the same direction.

For almost a year the United States had been conducting Operation Earnest Will in the Gulf, in response to the escalating “Tanker War” between Saddam Hussein’s Ba’athist Iraq and Ayatollah Khomeini’s Islamic Republic. The Tanker War was the latest chapter in a then eight-year grudge match between the Middle East heavyweights, which would ultimately consume a million lives. Only now, neutral shipping was getting caught in the crossfire.

After a U.S. frigate was struck by an Iraqi-fired anti-ship missile in May 1987, killing thirty-seven, the Reagan administration agreed to the Earnest Will campaign, which involved reflagging Kuwaiti oil tankers under the U.S. flag to permit military escort to and from the Gulf through the strategically-vital Hormuz chokepoint. What followed was a steadily-escalating “shadow war” between the United States and Iran, one of the few times the two countries ever came to blows. In April 1988, another frigate struck an Iranian-laid mine, leading to a major retaliatory action days later during which five Iranian naval combatants were sunk, others damaged, while drawing no American blood.

Which brings the story back to July 3, 1988. When Vincennes arrived on the scene of the purported crime, there was nothing in progress and the merchant ship in question reported all was well. But there were Iranian Revolutionary Guard Corps (IRGC) Navy gunboats in the area. After being ordered by higher-ups to leave the area, Vincennes and the frigate Elmer Montgomery complied, but Capt. Rogers ordered a Seahawk helicopter to continue observing the Iranian gunboats.

A series of unfortunate events followed, many of which remain disputed to this day. The helicopter reported taking fire; Rogers ordered it back home and turned his ship and Montgomery back north to attack the gunboats. With battle stations manned and ready, the Navy braced for a fight, but nothing happened. In fact, the IRGC boats behaved almost casually in the presence of the larger, stronger American warships and there was little display of hostile intent, as seen in a video shot by a Navy camera crew aboard Vincennes that day.

But Rogers insisted a threat was exhibited, citing “erratic speed and course changes.” The Iranians would eventually turn towards the U.S. ships an increase speed, but not before Rogers requested permission to open fire. Once authorized, Vincennes opened fire on the gunboats with its five-inch guns, destroying some of the gunboats.

As a naval skirmish unfolded, an Airbus A300 loaded with 290 passengers departed Bandar Abbas International Airport for Dubai. Many were pilgrims headed for the Muslim holy city of Mecca, many were women and children. Designated IR655, it was set on a collision course with Vincennes. Because the Bandar Abbas airport was a dual-use civilian/military airfield, it was presumed a hostile contact when first detected by Vincennes.

As IR655 approached, chaos began to unfold, complicating efforts to positively identify the inbound air contact. Vincennes’ forward five-inch gun jammed, forcing Rogers to order the cruiser to make a hard turn to bring the aft gun into firing position. Meanwhile, the increasingly crowded skies made it difficult to keep track of what was what and radio challenges to what was thought to be an approaching F-14 Tomcat fighter-interceptor went unanswered.

Whether it heard the radio calls or not, IR655 maintained course. Initially, Vincennes intended to “take” the contact at 20 miles, but instead waited until the plane was within 12 miles—too close for comfort. Rogers made the call and two surface-to-air missiles were unleashed, both striking the Airbus seconds later. Not long thereafter, visual evidence and radio traffic indicated it was not an Iranian F-14 that was downed.

All 290 aboard were killed. Admiral William Crowe, Chairman of the Joint Chiefs of Staff, stated the United States “deeply regretted the incident,” a stark contrast to Iran’s initial denial of responsibility in the downing of PS752. However, as Iran is currently qualifying its behavior in the context of American action, the United States in 1988 would progressively lay blame on the Iranians; first for instigating the naval skirmish and then permitting a civilian airliner to transit a war zone.

There are problems with both accusations, but what is relevant in comparing PS752 to IR655 is that both occurred amidst heightened tensions between the United States and Iran, during which confusion and the fog of war played a major role in setting up a tragedy. While a significant gap in technological sophistication and training exists between the United States and Iranian militaries, the IR655 incident proved that even the world’s most advanced warship and the best-trained warriors in the world could still commit fatal errors.

As was the United States in 1988, Iran in 2020 was on guard for a possible attack—Capt. Rogers was determined to not allow Vincennes to become another victim of an anti-ship attack and Iran reasonably feared an American response to its January 7 missile attack on Iraqi bases. It still is not clear how Iran misidentified PS752 as a hostile contact or how the accidental shootdown actually unfolded, but it can be reasonably presumed the shootdown would not have occurred had the U.S. and Iran not been in a state of escalating hostilities.

As in 1988, however, Iran may once again be forced to take the proverbial “hit.” Though not responsible for the downing of IR655, its status as a pariah state meant little international sympathy was garnered. Jarring as the incident was, an Iranian populace worn down by eight years of knock-down, drag-out war with Iraq had little outrage left to give. Iran was, in fact, convinced the United States was willing to intervene more deeply in the war against them, going as far as killing civilians to do so. Seemingly reading the writing on the wall, Ayatollah Khomeini drank from the “poisoned chalice” in August that year and agreed to the cease-fire that ended the Iran-Iraq War, concurrently de-escalating tensions with America, at least for the moment.

Likewise, in the present, Iran can only go so far in placing blame on the United States. In addition to eighty-two Iranians, nationals of five other countries perished, with sixty-three from Canada alone. It can be argued PS752 constitutes a greater international crisis than IR655, as Iran is attempting to rally world powers on its side against America, particularly considering the latter’s withdrawal from the 2015 nuclear deal. Iran is not quite the same sort of pariah it was in ’88, so it no longer has the same kind of space to play the “bad boy” role as it once did. Ironically, the downing of PS752 constitutes an opportunity for Tehran to reform its behavior, and prove to countries like Canada that it can behave as a “normal nation” and that it is the United States that ought to check itself. Early indications suggest Iran is not up to the task, however.

An opportunity for a prolonged de-escalation of the U.S.-Iran conflict certainly exists. Assuming, of course, Tehran does not insist on getting the last word – any comparison between PS752 and IR655 is incomplete without mentioning the bombing of Pan Am Flight 103 on December 21, 1988. Though Libyan dictator Muammar Gaddafi assumed responsibility, there were also suspicions Iran tapped into its network of terrorism to retaliate for IR655, a theory for which evidence has increasingly surfaced over time. Iranian President Hassan Rouhani, in fact, may have implied Iran’s hand in Pan Am 103 during a Twitter duel with President Donald Trump following the death of Qasem Soleimani.

All of which proves that the events of thirty years ago not only loom large today, but that the U.S-Iran conflict is far from over. At best, the current round of elevated hostilities may be at an end, but ominously perhaps not before the Islamic Republic has one final say.

Edward Chang is a defense, military, and foreign policy writer. His writing has appeared in The American Conservative, The Federalist, The National Interest, and War Is Boring. He is currently pursuing a Master’s degree in Military History. He can be followed on Twitter at @Edward_Chang_8.