Why Pelosi's Infrastucture Plan Would be a Total Trainwreck 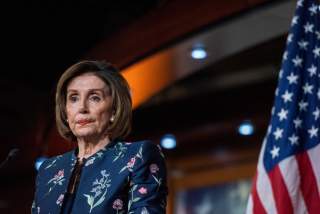 House Democrats on Wednesday revealed their framework for infrastructure legislation this year, a package titled “Moving Forward.” The same day, the powerful House Ways and Means Committee held a hearing on transportation-related revenues.

This was not a coincidence. House Speaker Nancy Pelosi announced two weeks ago that there would be a flurry of infrastructure-related activity.

Together, the document and the hearing combine to create a blueprint for tax hikes, wasteful spending, and more Washington control of the nation’s valuable infrastructure systems.

The “Moving Forward” plan suffers from many of the same flaws. Like the Green New Deal, it includes subsidies for a variety of often unrelated industries, which would turn the sober work of infrastructure policy into a giveaway for favored lobby groups.

To take just one example, in the “Moving Forward” package, urban areas would receive a subsidy for mass transit while rural areas would receive subsidies for broadband deployment. The reason why the federal government should take money from people in one type of living arrangement to subsidize people living in another is never explained.

Both plans imagine—wrongly—that Congress and the federal government have the competence to oversee all of America’s roads, bridges, airports, waterways, utilities, and local first responders.

And both plans would funnel massive amounts of money into rail projects, which very few people would use (especially in the heartland) and would yield a minuscule reduction in carbon emissions.

In typical Washington fashion, House leaders have gone to great lengths to tout the potential benefits of the plan, yet have put off the hard work of paying for it.

This is not a mistake. When you compare the supposed benefits of the plan to what it would cost American families, the plan loses all appeal.

The plan would spend $760 billion of taxpayer money over a five-year period. That’s a price tag of $5,900 for every American family.

Although House leaders haven’t specified how they will pay for that, there are only a handful of options. None of them are appealing:

Supporters of big-spending federal infrastructure plans often present a false choice: Either you support the plan, or you want roads to crumble.

But there is another option that would generate far more value for the nation with much less waste: reducing the amount of federal activity and interference in infrastructure. After all, states and communities know their needs better than bureaucrats in Washington, D.C.

They also don’t want the thick layer of red tape that comes with federal funding projects.

Ultimately, state and local governments and private companies do nearly all the work of building and maintaining the nation’s infrastructure. The federal government is at best an inefficient middle-man for funding these projects, and at worst an active enabler of bad decisions.

Americans would be better off if tax dollars and infrastructure decisions stayed closer to home.

His article first appeared in The Daily Signal on January 31, 2020.