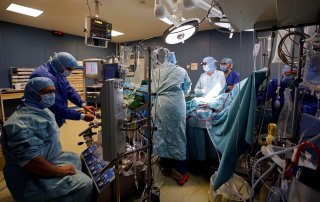 Yet when I ask undergraduate students in my chronic disease class (most of whom are female) which disease causes the most deaths in women, only about half give the answer heart disease; a third say it is breast cancer.

This mirrors a 2012 survey from the United States, which found that only 56 per cent of female respondents identified heart disease as the leading cause of death.

Such a lack of awareness has very real consequences. Women who experience a heart attack in the U.S. are more likely to misunderstand the symptoms and delay seeking treatment. In Canada, early heart attack signs were missed in 78 per cent of women, according to the 2018 Heart Report from the Canadian Heart and Stroke Foundation.

Upon arrival in hospital, women’s symptoms can be dismissed by medical professionals as something else. They are also referred less for in-hospital treatments such as angioplasty (the clearing of a blockage in a heart artery) than men in the U.S., experiencing greater risk for death. Research has found a similar gender bias among general physicians in the United Kingdom and Germany as well as the U.S., resulting in less accurate diagnosis and treatment for women.

So, why this dismal knowledge of heart disease in women?

Not just a “widowmaker”

One reason is that research has historically been conducted in middle-aged and older men. This is, in part, because men had heart attacks during their working years, potentially limiting their economic productivity.

There was also a fear of involving pregnant women in research, which led to all women of child-bearing age being restricted from participating in most research in the U.S. until the 1990s.

As a result, people both within and outside the medical profession had the impression that heart disease is for men.

This bias is easily recognized by the term “widowmaker” to describe the left main artery: One of the key arteries of the heart in which a blockage may lead to early death.

As women get heart disease later in life than men, they also have more age-related risk factors than men — such as diabetes, which makes treatment more complex.

Early age of puberty and menopause have also been associated with greater heart disease risk.

And differences extend to anatomy. Given their smaller body size, women tend to have smaller hearts and arteries than men. This has been associated with higher mortality during bypass surgery.

One of the more perplexing facts about heart disease in women is that a heart attack can occur even without any heart arteries being blocked. This can happen with a “coronary artery spasm,” in which an artery of the heart suddenly closes upon itself. And it can happen with “spontaneous coronary artery dissection,” in which the inside of the heart artery tears, leading to a blood clot.

When there is no blockage, diagnosis by traditional methods is difficult.

While women having a heart attack can feel severe pain in their chest, many also experience more subtle symptoms such as shortness of breath, discomfort in their arms, neck and jaw, sweating or nausea.

Despite these symptoms being fairly common in women, they are still referred to as “atypical,” indirectly suggesting that a woman’s experience is not normal. Yet they are normal for women.

A review of studies from nine countries found that women are also less likely to be referred to, and attend, cardiac rehabilitation programs.

And recent research from Sweden shows that failure to adhere to treatment guidelines results in greater premature death for women within five years after a heart attack compared to men. This confirms earlier findings in many other countries as well.

While there is much work to be done, each year this gap in knowledge and treatment closes in North America thanks in part to Health Canada and the US Food and Drug Administration implementing guidelines to ensure the inclusion of women in research.

Continued advocacy by the Heart and Stroke Foundation and the American Heart Association is also important for increasing awareness both within and outside of the health care systems.

Additionally, more research in tailoring treatments to women, like female-only cardiac rehabilitation, will help in the design and application of treatments.

As individuals, the capacity to recognize and understand the signs and symptoms of heart disease could be life-saving — for our loved ones, friends, bystanders and even ourselves.