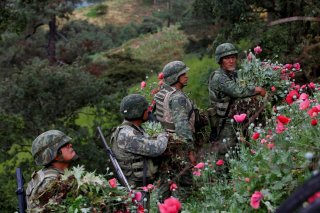 Conflict and instability tend to benefit the illicit drugs trade. Look at Afghanistan, where opium cultivation reached unprecedented levels during the U.S.-led war, or Myanmar, which has apparently been producing more and more methamphetamine since a coup plunged the country into chaos last year. Manufacturing of the amphetamine captagon has boomed on the back of Syria’s civil war and ensuing devastation, with millions of tablets regularly seized in the region.

Ukraine may turn out to be another example. The United Nations recently warned that the production and trafficking of narcotics could increase in the country following Russia’s invasion. True, Ukraine has so far not been a major source of narcotics, but it has potential as a synthetic drugs producer. Before the war, there was an increase in the tally of amphetamine labs dismantled in Ukraine, with the country registering the highest number of labs dismantled in the world in 2020.

Seizure data suggest that drug trafficking through Ukraine had also been expanding prior to the invasion. One of the routes for smuggling Afghan heroin to Europe transits through the country. Traffickers could now take advantage of the chaos to increase narcotic flows. They will also likely have an ample supply of opiates from Afghanistan. While the Taliban has vowed to ban drugs, the country’s dire economic situation makes it hard to stamp out the opium trade, which provides hundreds of thousands   of Afghans with a livelihood.

And while the Taliban prohibited drug production and trafficking in April, the decree “appears largely unenforced” so far, according to the European Union’s (EU) drug agency. Afghanistan has also started manufacturing large amounts of methamphetamine using the local ephedra plant, and the EU is concerned that cheap Afghan meth could eventually make its way to Europe along established heroin-trafficking routes, of which Ukraine is one.

This would not be the first time that conflict has led to an uptick in smuggling. During the Syrian Civil War, narco-trafficking through Turkey reportedly increased. However, war could have the opposite effect and actually deter smugglers, according to the UN. Violence and the heightened security presence in Ukraine might divert drugs through other, less dangerous countries. This happened in the 1990s, when the conflict in Yugoslavia forced traffickers to use alternative routes, for example.

The war has caused at least a temporary disruption in trafficking from Russia to Ukraine, according to a new report by Global Initiative (GITOC). The conflict has shattered “cross-border criminal cooperation” between Russians and Ukrainians, while the war-related destruction of infrastructure and closing of roads had a “rapid effect” on the smuggling of Afghan heroin to Europe. There might, then, be a shift in trafficking flows to Turkey. But the old criminal networks may eventually be restored, the report suggests.

This is a region where smuggling and mafia activity have long been entrenched. The 2021 organized crime index ranked Ukraine third among forty-four countries in Europe, just below Russia. It was also the second most corrupt country in Europe, according to Transparency International. And now, as the Ukrainian economy goes into a nosedive and Russia reels from sanctions, ordinary people and the authorities might be given further incentives to earn money through illicit means.

A rise in drug use should also be expected. War, needless to say, causes stress and trauma, increasing people’s vulnerability to substance abuse. Ukraine already had high numbers of people who inject drugs and suffer from HIV and Hepatitis C. And those figures could grow even higher, as research shows that displacement leads to more dangerous forms of drug use, such as needle-sharing. Moreover, drug treatment services have been curtailed due to the conflict, depriving addicts of medication.

But this is ultimately about much more than Ukraine. The conflict will likely affect the drug trade globally, not only in Eastern Europe. That is because the economic and geopolitical consequences of the war could make India and China even less willing to acquiesce to international drug control efforts. Those two countries play a vital role in the narcotics trade because their chemical and pharmaceutical industries provide the ingredients used to make synthetic drugs such as fentanyl and methamphetamine.

Chemicals sourced from China and, to a lesser extent, India, not only supply Mexican cartels who manufacture most of the fentanyl driving the U.S. drug overdose crisis but also feed producers in Myanmar, who are flooding Southeast Asia with more and more crystal meth and cheap meth tablets. To curb the synthetic drugs trade, it is therefore necessary to stem the supply of precursor chemicals.

Indeed, a bipartisan Congressional opioid commission recently issued a series of recommendations for addressing the American opioid epidemic, one of which was partnering with China and India to stop the diversion of chemical supplies. But cooperating with those countries on counternarcotics has never been easy, and it might get harder because of the war in Ukraine.

The Chinese and Indian pharmaceutical and chemical industries are enormous, highly lucrative, and resistant to regulation at the best of times. And now, facing major economic headwinds, those businesses will be even more averse to regulatory constraints. Indian pharma risks losing business in Russia and Ukraine, which are important markets. In 2021, pharmaceutical products accounted for 30 percent of India’s exports to Ukraine and 15 percent to Russia.

Trade has already been impacted negatively by the war. Ukraine is under blockade, and sanctions against Russia have obstructed payments. Moreover, inflation affects the pharmaceutical industry by increasing the cost of ingredients derived from benzene and petroleum products while making freight more expensive. There is also a shortage of aluminum foil from Ukraine, which is used in pharmaceutical packaging.

These problems are compounded by price controls, which prevent Indian drug manufacturers from raising prices sufficiently to compensate for rising costs. In these adverse circumstances, it is unlikely that the government will subject the pharmaceutical sector to greater scrutiny and thus clip the wings of an already struggling industry that is one of India’s major exporters.

The same goes for China, whose chemical and pharmaceutical industries have been suffering from the government’s zero-COVID strategy. And lockdowns aren’t the only problem facing China’s economy: its heavily-indebted property market is also tanking. No wonder, then, that the Chinese government has started easing its regulatory approach across a variety of sectors.

And it’s not just economic factors that militate against effective drug control. The geopolitical fallout of the war could also undermine international counternarcotics cooperation.

Washington has for years tried to work with Beijing to stem the flow of synthetic opioids to North America. And in 2019, those efforts paid off when China scheduled fentanyl and its analogues. But, as U.S.-China relations deteriorated during the COVID-19 pandemic, anti-drug cooperation declined and is unlikely to recover anytime soon, according to a recent report by the Brookings Institution.

And now the Ukraine war places even greater strain on bilateral ties. Beijing has not condemned the invasion or joined Western sanctions on Moscow, while its official statements echo Russian propaganda about NATO expansion and American culpability for the crisis. Washington has also expressed concern that Beijing might provide military support for the Russian war effort, raising the prospect of secondary sanctions.

That has not yet happened and U.S.-China engagement has continued, with repeated meetings between high-level officials since the war began. It is possible that President Biden might lift some tariffs on Chinese imports, which would ease tensions. But the relationship will remain competitive and cooperation in areas like counternarcotics will be difficult, regardless.

India has cooperated more with the United States in recent years, forming a joint task force in 2020 to stem the flow of synthetic opioids, for example. But Delhi has also refused to condemn Putin’s invasion, depending as it does on Russian arms imports. And, since the war began, their energy ties have become much closer, with India rapidly increasing its imports of Russian oil and coal.

The Biden administration is clearly frustrated by India’s position on the war, warning Delhi not to accelerate its purchases of Russian oil. However, the United States needs India for its efforts to contain China and has been mild in its criticism. The two countries had a successful meeting of foreign and defense ministers in April, indicating that their strategic partnership remained intact.

But, as Russia-India trade expands rapidly and Indian companies look to fill the vacuum left by Western businesses in the Russian market, Washington’s patience could be strained. Indeed, the U.S. consulate in Mumbai reportedly wrote to the local port authority in recent weeks, insisting that Russian ships be prevented from docking due to sanctions. As these tensions escalate, cooperation in areas like counternarcotics could be impacted.

The global drugs trade is currently booming. The Ukraine crisis will give it a further boost.