Why The Remington 700 Rifle Is Simply Unstoppable 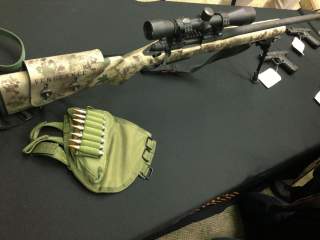 Key Point: The Marine Corps will be using the Remington 700 rifle long into the future.

The Remington 700 has served the U.S. military for more than half a decade. Both major ground warfare services, the U.S. Army and U.S. Marine Corps used variants of the Remington 700. The rifle is likely to serve well into the future, updated versions of the rifle were adopted as recently as 2019.

The story of the Remington 700’s official use in the US Military begins in Vietnam. As the Marine Corps needed a newer sniper rifle to replace their stocks of aging M1903 Springfield sniper conversions, a variant of the Remington 700 was selected for use and given the designation M40. These were fitted with 3-9x Redfield scopes and wooden stocks, typical of rifles of the era. However, the Army thought that semi-automatic sniper rifles were the future, and favored their own sniperized M14 project, the XM21 over adopting a newer bolt action.

The M40 was a success and was updated after the war into the M40A1 standard, with an upgrade to the magnification of the scope to a fixed 10x and the replacement of the wood stocks with a green fibreglass McMillan stock. At the same time, the Army’s M21s were suffering issues in the accuracy department, as the rifles were notoriously hard to keep accurate due to the finicky nature of the M14 action.

In the 1980s, the Army had enough of the M21’s problems and adopted a Remington 700 as the M24 Sniper Weapon System (SWS). The SWS came with a black polymer stock and a 10x scope. However, it also was a “long-action” rifle, able to potentially accommodate longer calibers like the .300 Winchester Magnum. Comparatively, the Marine Corps M40-series used a short action, which was restricted to shorter calibers.

The M24 and M40A1 would serve with little variation until the turn of the millennium. But after Operation Desert Storm, the limitations of the rifles began to become clear. The 7,62x51mm round was found to be very limiting at extended ranges, even with the M118 match (or “special ball”, depending on year of manufacture) ammunition. Some new cartridges, utilizing open-tipped rounds for increase accuracy were adopted, but these still were held back by the relatively small cartridge.

Things started to change in the 2000s. U.S. Special Operations Command (SOCOM) was the first to move, as is usual in small arms procurement. In the late 1990s/early 2000s, Navy SEALs fielded a Remington 700 long action in .300 Winchester Magnum called the M91A2. This rifle would later be redesignated Mk 13. SOCOM would later adopt the Mk 13 Mod 5, a Remington 700 long action chambered in .300 Winchester Magnum in an Accuracy International Chassis System chassis at the end of the 2000s. This let them catch up with many NATO partners, which already had adopted various .300 Winchester Magnum rifles by that time, such as the UK, which adopted the L115A1 for general issue in the mid 2000s. The Marine Corps updated their M40s into the M40A3 standard at the time, but retained the 7,62 caliber, only changing the stock, scope mounts, and scope on the rifle.

However, the Mk 13 Mod 5 was only a “SOCOM” rifle, regular troops were still using regular 7,62 M24s and M40A3s. The Army was the second to move and finally acted on the option to upgrade their rifles to .300 Winchester Magnum under the M2010 Enhanced Sniper Rifle program. M24s were went to Remington Defense to be rebuilt as M2010s, which placed them in a totally new chassis with a detachable magazine. All M24s were rebuilt into M2010s by 2014, M2010s are currently the standard “long range” sniper rifle of the U.S. Army.

Charlie Gao studied political and computer science at Grinnell College and is a frequent commentator on defense and national security issues. This piece was originally featured in January 2020 and is being republished due to reader's interest.