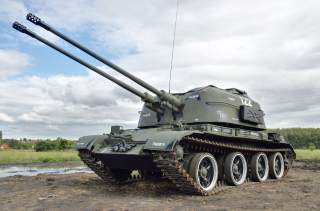 During World War II, the Soviet Union fielded 57-millimeter anti-tank guns towed on wheels or mounted on armored chassis. After the war, the Soviets built the ZSU-57-2, a self-propelled anti-aircraft gun, or SPAAG, mounting dual 57-millimeter rapid-fire cannon on a T-54 tank chassis.

Now, Russia’s Ministry of Defense has decided that the cannon on all future armored troop carriers will be 57-millimeter weapons. “The new maximum caliber - 57 millimeters - has been selected for all light armored vehicles (BMPs [infantry fighting vehicles], BTRs [armored personnel carriers], and armored motor vehicles),” according to Izvestia. “Those guns are strong based upon their versatility. They are capable of not only destroying tanks, but also of shooting down unmanned aerial vehicles. One can compare their rate of fire with a machinegun. For the time being, only Russia has been able to bring that weapon up to series production. A light armored vehicle with a 57-millimeter gun will obtain an advantage over other armored vehicles of that same class.”

In addition to armored vehicles, Russia is developing a new 57-millimeter self-propelled anti-aircraft gun. The 2S38 Derivatsiya-PVO is built on a BMP-3 infantry fighting vehicle chassis. But like the T-14 Armata tank, the crew will sit inside the armored hull and operate the unmanned turret, armed with a single 57-millimeter cannon that can shoot 120 rounds per minute, as well as a 7.62-millimeter machine gun.

The 2S38 will have electro-optical and laser fire control, and can destroy aerial targets up to 6 kilometers (3.7 miles) away and at altitudes of up to 15,000 feet. One Russian defense magazine claims the 2S38 will have a novel ability to fire 57-millimeter shells that can be instantly programmed by the vehicle’s fire control system to detonate at a specified time and distance.

Historically, many armies have used anti-aircraft guns in ground combat, if not always voluntarily. Heavy anti-aircraft guns, like the legendary German 88-millimeter flak gun, fired high-velocity rounds that punched through tank armor: smaller-caliber flak has rapid rates of fire that can hose down ground targets. Perhaps that’s why Russian self-propelled anti-aircraft guns have probably shot more rounds on the ground than in the air. “The Soviet-manufactured ZSU-57-2 self-propelled anti-aircraft gun (SPAAG) was considered to be quite a success during the Vietnam War, the Arab-Israeli wars, and the Iran-Iraq War,” notes the U.S. Army’s Foreign Military Studies Office (FMSO). “Although the ZSU-57-2 lacked a radar system, making the targeting of jet aircraft extremely difficult, the system was excellent at engaging slower moving targets. The ZSU-57-2 and other SPAAGs that use smaller caliber shells, such as the ZSU-23-4 Shilka, the 2K22 Tunguska, and the Pantsir-S1, have an important secondary mission to use their rapid-fire guns to fire on ground targets when required.”

FMSO believes that choosing a standard weapon, like 57-millimeter cannon for vehicles, is part of Russian policy. “The Russian Federation has long made modularity a cornerstone of its military modernization,” FMSO says. “For instance, the Armata, Kurganets, Atom, BTR-82 and BMD-4M chassis are all manufactured to accept BMP-3 turret specifications, so chassis and turrets of different manufacturers may be mixed and matched. Since these new turrets are all unmanned, some Russian theorists have posited that there will be no functional difference between infantry fighting vehicles and armored personnel carriers in the future.”

What’s also interesting is Russia’s choice of a larger-caliber weapon. Cold War U.S. self-propelled anti-aircraft like the M42 Duster, or the cancelled M247 Sergeant York, used 40-millimeter cannon. Western infantry fighting vehicles, like the U.S. M2 Bradley and Germany’s Puma, have rapid-fire 25- or 30-millimeter weapons. While Russia has opted for heavier 100-millimeter cannons on its BMP-3 troop carriers (and which can only carry forty rounds), its latest BMPT-72 Terminator combat support tanks are armed with two 30-millimeter autocannon as well as anti-tank missiles.

So why is Russia opting for a 57-millimeter weapon that will use larger ammunition and consequently allow Russian vehicles to carry fewer rounds than Western models? Russia’s new self-propelled 57-millimeter flak gun will only carry 148 rounds; with a rate of fire of 120 rounds per minute, even short bursts might quickly deplete its ammunition supply.

“The more powerful 57-mm gun will permit a Russian light armored vehicle to not only easily deal with BMPs [infantry fighting vehicles] and BTRs [armored personnel carriers] but also enter into a skirmish with any existing probable enemy tanks, if necessary,” explains Izvestia. “It will be able to use it to damage sights, thermal-imaging devices, and other external equipment or to attack the side of such a well-defended tank as an Abrams.”

Russia believes that while Cold War armored vehicles emphasized tank-killing capabilities, armor-piercing weapons aren’t so important anymore. “Not hostile tanks, BTRs, or BMPs, but lightly-armored jeeps or unmanned aerial vehicles are increasingly becoming the main target on the battlefield for armored transport vehicle crews,” Izvestia explains. “Those targets need to be destroyed at maximum range, having used a minimal amount of ammunition. It is impossible to permit light infantry, which is traveling in ‘21st century machinegun carts,’ to be the first to employ antitank guided missiles or drones - to transmit reconnaissance information to their command post.”

Now the U.S. Army wants to develop a new armored vehicle that can carry a half-dozen infantry, is armed with anti-tank missiles, and is armed with a 50-millimeter cannon. Perhaps Russia’s 57-millimeter guns are the caliber of the future.