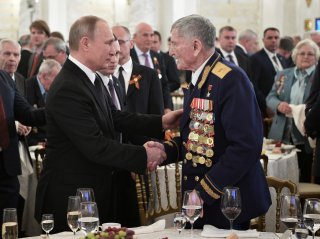 During the Cold War, Russians liked to joke about Soviet leader Leonid Brezhnev, whose parade uniform groaned under the weight of the 114 medals had he had either been awarded or had awarded
himself.

Did you hear that Brezhnev is going to have surgery? He’s having his chest widened to make room for more medals.

Nor were Soviet generals particularly modest with their decorations. WWII Marshal Georgi Zhukov had a chest practically buried behind glittering metal, though unlike Brezhnev, the legendary commander earned his.

What would happen if Brezhnev were eaten by a crocodile? The crocodile would be shit*ing medals for two weeks!

Today’s Russian commanders are a bit more modest in their decorations. But some officers are wearing so many medals that the troops mockingly call themed “iconostases,” after the wall of icons and paintings found in Eastern Orthodox churches, according to Russian media.

So in 2019, the Russian military issued a new regulation: no more than 10 medals can be worn on parade uniforms.

“Only two rows of five medals each can now be worn,” said the Russian newspaper Izvestia. “That is, service personnel can pin no more than 10 medals, awards, and departmental heraldic badges onto two boards on the left side of the tunic. Civilian awards and badges of public organizations are banned from parade uniforms. Previously some officers ’ uniforms had entire "iconostases, ” as they were humorously known by the troops. And this flippant attitude toward decorations did not help raise the authority of officers and prestige of the Armed Forces.”

Izvestia highlighted the more modest dress of Defense Minister Sergei Shoigu: “The head of the military, who has received dozens of awards over the years of work in high posts, has shown a personal example to subordinates. Sergei Shoigu entered the parade on May 9 in his uniform, on which there were only two rows of the five most significant orders and medals. In addition to the “Golden Star” of the Hero of Russia, the orders of Alexander Nevsky and “For Personal Courage,” as well as other top awards, were attached to the minister’s formal tunic.”

That’s far less chest fruit salad than Brezhnev, who even bestowed WWII decorations on his son-in-law, who was just 5 years old when the medals were supposed to have been earned (Brezhnev himself served as a commissar in WWII). The late Soviet leader’s self-promotion was so flagrant that in 1989, seven years after Brezhnev had passed away, the Soviet government actually stripped him of the Order of Victory, the Soviet Union’s highest military award.

Compare that to Robert Lewis Howard, a Vietnam veteran who is considered the most decorated American soldier. Howard, who retired as a lieutenant colonel and passed away in 2010, also had a chest emblazoned with medals: 88 decorations to be exact, including the Medal of Honor and a staggering eight Purple Hearts. Indeed, Howard reportedly could have garnered six more Purple Hearts for wounds in combat, but “told his superiors the other six injuries weren’t severe enough to warrant a medal and he refused the awards,” according to one news account.