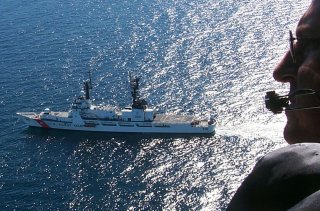 Russia’s Navy is monitoring a U.S. vessel in the Black Sea amid simmering military tensions between Russia and the North Atlantic Treaty Organization.

The U.S. Navy announced earlier this week that the Coast Guard cutter Hamilton has transited into the Black Sea “to support NATO allies and partners.” Hamilton’s Black Sea patrol was preceded by logistics visits to Spain and Italy, and is part of a larger routine deployment by the Coast Guard in the Navy’s Sixth Fleet to build “maritime domain awareness” and share “best practices with partner nation navies and coast guards.” This marks the first time since 2008 that a U.S. cutter visited the Black Sea. Shortly before making its way to the Black Sea, Hamilton conducted joint interoperability exercises with the Arleigh Burke-class guided-missile destroyer USS Roosevelt in the Aegean Sea. “Operating with Roosevelt shows how the Coast Guard, Marines, and Navy are a unified Naval Service committed to maintaining a rules-based international order in the maritime domain,” said  Capt. Timothy Cronin, Hamilton’s commanding officer. The Sixth Fleet is headquartered in Naples, Italy.

Earlier, the Ticonderoga-class guided-missile cruiser USS Monterey and Arleigh Burke-class guided-missile destroyer USS Thomas Hudner conducted Black Sea operations on what the Navy described as “a routine patrol to maintain maritime security alongside other NATO Allies and partners” in March 2021.

Russia’s Black Sea fleet reacted swiftly to Hamilton’s visit. “The Black Sea forces and means have begun monitoring the actions of USCGC Hamilton, which entered the Black Sea on April 27,” according to a statement from Russia’s National Defense Control Center.

Hamilton’s trip coincides with a series of naval drills being held in the same region by Russia’s Black Sea fleet. The Moskva Slava-class missile cruiser, along with several smaller vessels, is conducting combat exercises that involve live fire against notional enemy vessels, as well as joint maneuvers with military helicopters and air defense systems. The Black Sea fleet cordoned off part of the surrounding area on April 24 to safely conduct these exercises. U.S. State Department spokesperson Ned Price condemned the transit ban, which will last through October, as an escalatory action aimed at undermining and destabilizing Ukraine. Western analysts have previously warned that the Kremlin may be planning to capture all or part of Ukraine’s Black Sea coast in the event of a major military confrontation between Kiev and Moscow. Those fears have abated, at least in the short term, as the Kremlin has recently begun pulling back its troops after staging what has been called the largest buildup of Russian forces on Ukraine’s border since 2014.

Citing Price’s comments and the timing of the U.S. cutter’s visit, several Russian commentators have charged that Hamilton’s Black Sea “raid” amounts to a military provocation against Russia. Though a lone cutter scarcely poses any threat to Moskva and the Black Sea fleet vessels participating in the Russian Navy’s ongoing exercises, these observers may be concerned that Hamilton’s local presence during the Black Sea fleet’s live-fire exercises carries the risk of inadvertent military escalation.