Is Ukraine Ready for the Next Russian Invasion? 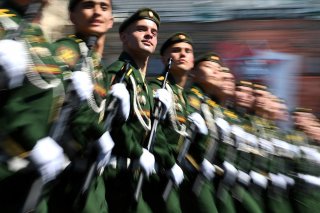 In recent weeks, the Kremlin executed the largest military build-up on the Russian-Ukrainian border since 2014. Units not just from Russia’s local Western Military District but also from the Central and Southern Military Districts gathered en masse at two points: Russia’s border territory along Ukraine’s contested Donbass region, and Crimea.

As tensions escalate over the ongoing Donbass conflict, defense analysts continue to debate whether or not Russia is preparing to invade Ukraine. But how might such an invasion look, and what would follow it? According to one suggested scenario, the Kremlin could set the stage for a possible conflict by extending formal recognition to the self-proclaimed People’s Republics of Donetsk (DNR) and Luhansk (LNR). Under the pretext of defending these pro-Russian separatists—some 640,000 of whom have, by now, been granted Russian citizenship—from Ukrainian aggression, the forces amassed at Russia’s borders would begin moving westward and will quickly absorb the territories currently controlled by Russian-backed LNR and DNR forces. Ukraine’s Armed Forces are in no position to deny, or even to impose meaningful costs on a quick and relatively painless Russian annexation of the contested Donbass region. The prospects for a vigorous guerilla resistance effort in the Donbass are likewise slim; the available data suggests that pro-Kiev sentiment in Luhansk and Donetsk was relatively small in 2014, and has further dwindled since.

The absorption of DNR and LNR would bring Russian forces close to the line of separation between Ukraine and the contested part of Donbass. The Kremlin may very well opt to stop here, leveraging its rapid battlefield gains to pressure Kiev and the west into accepting some type of de-jure independence, de-facto Russian protectorate status for DNR and LNR, broadly resembling Abkhazia in the aftermath of the 2008 Russo-Georgian War. Assuming that the west does not intervene on a military level, the only challenge facing Russia would be an administrative one. Salvaging the war-torn infrastructure of Donbass, as well as paying pensions and providing healthcare to the people of LNR and DNR, will impose massive costs on the Kremlin’s already-strained coffers.

But, depending on the circumstances leading up to this point, Moscow may choose to continue further into Ukraine. Though it remains exceedingly unlikely that Russia will try to occupy Kiev, experts have cautioned of a Russian westward offensive centered around capturing much if not all of Ukraine’s Black Sea coast. This operation would presumably start at Mariupol and continue through Berdyansk; depending on the scale of Russian ambitions, the offensive could run all the way through the major Ukrainian port city of Odessa. Such a conflict would be entirely different from a quick-and-easy Russian annexation of Donbass. Despite being vastly outmatched and outnumbered in every relevant military category, Ukraine’s Armed Forces will likely marshall all their strength to bitterly resist Russia’s offensive. Even with its overwhelming military advantage, it will not be logistically simple for Russia to quickly establish full, uncontested control over such a long stretch of the coastal territory. Further still, Odessa is not Donetsk. Russia’s occupying forces cannot expect that they will be greeted as liberators in Ukraine’s southern coastal cities, and must prepare for the possibility of insurgencies followed by mass civilian casualties.

Though it is clear that Kiev cannot single-handedly win in any scenario involving a full-fledged Russian invasion, it can possibly prevent Russia from achieving a blitzkrieg-style outcome through persistent military and civilian resistance. This could buy the United States and EU enough time to formulate a coherent policy response, up to and including military intervention.