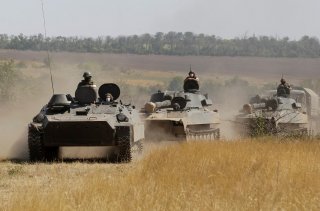 With a coming change of administration in the White House, Kiev is mounting a renewed and dangerously provocative push to retake the separatist Donetsk and Luhansk People’s Republics.

Within days of the U.S. presidential election being called for Joe Biden, Ukraine’s armed forces resumed combat operations in over a dozen hot zones across the breakaway region of eastern Donbass. Separatist positions came under fire by Ukrainian mortars, infantry fighting vehicles (IFVs), grenade launchers, and small arms; at least two Donetsk People’s Republic (DNR) soldiers were killed, including one DNR commander. The DNR’s former Defense Minister Igor Strelkov predicted late last week that Ukrainian offensives will increase in scale and frequency following Joe Biden’s victory: “It [the Ukrainian offensives] never stopped, though the intensity varied. But a decisive Ukrainian offensive is possible, unfortunately. It was possible all of these six years. Now it’s even more possible, especially after Joe Biden’s victory,” said Strelkov in an interview with Russian media. Former DNR Chairman Andrei Purgin added that, whereas the Trump administration pursued a policy of “slow strangulation” against the Donbass separatist republics, Biden’s approach will be “more aggressive and straightforward.” The renewed Ukrainian offensives are the latest flare-up in what has been an uneasy ceasefire negotiated in late July.

Biden has consistently espoused a policy of rollback against Russia, including further military aid to Ukraine. But previous military aid packages to Ukraine were intended to be used for purely defensive purposes; that is, helping Ukraine’s army to stave off the threat of westward Russian encroachment beyond the territories seized by the separatists in 2014. Neither Biden nor any U.S. government official has explicitly supported Ukrainian attempts at retaking their lost provinces by military force, which would be a violation of the Minsk Protocol agreement signed by Kiev, Moscow, the Organization for Security and Co-operation in Europe (OSCE), and the two breakaway republics in 2014. Washington has formally supported the Minsk Protocol—a peace agreement that outlines a path for the reintegration of the Donetsk and Luhansk Republics into Ukraine—under both the Obama and Trump administrations, and there is no indication that this policy will change under a Biden White House.

But there is a growing appetite in Kiev to renegotiate some of the Minsk Protocol’s provisions, with an increasing number of Ukrainian commentators and politicians charging that the agreement is impossible to implement in its current form. The Minsk Protocol requires both Ukraine and Russia to withdraw their forces from the conflict’s borders so that an OSCE-observed ceasefire can be implemented, after which both Luhansk and Donetsk will hold local elections. The two republics will then return to Ukraine as autonomous zones, with their special status protected by an amended Ukrainian constitution. In addition, all separatists must be granted amnesty by Kiev.

Ukraine’s first president, Leonid Kravchuk, stated earlier this week that, while Kiev supports the spirit of the Minsk accords, the breakaway regions must come under Ukrainian control prior to local elections being held. “We must take the territory under control and make ourselves accountable to the international community about conducting the elections, so that everything can be done lawfully.” Kravchuk also reiterated a growing consensus in Kiev that there cannot be a blanket amnesty law and argued instead for a “selective amnesty” that does not cover those accused of violent crimes. Ukraine’s current President Volodymyr Zelensky echoed Kravchuk’s sentiments in a recent interview, arguing that there cannot be free and fair elections in Donetsk and Luhansk until Ukraine fully controls its borders with Russia, as well as expressing “dissatisfaction” with the wording of some of the agreement’s provisions. Still others in Kiev have advocated for more radical revisions to the Minsk Protocol; Ukrainian politician Yevhen Marchuk insisted that the separatist provinces must spend “at least 4-5 peaceful years” under Ukrainian control before local elections can be held.

Despite Kiev’s growing list of issues with the Minsk format, Ukraine is unlikely to withdraw from the Minsk format any time soon. Ukraine’s Deputy Prime Minister Aleksei Reznikov stated late last month that the protocols are “100 percent impossible” to implement as currently written, but added that Ukraine cannot unilaterally withdraw from them without grave international consequences. Instead, Reznikov suggested that the Minsk format can be revised: “there is no problem with the leaders of the Normandy Format [Germany, Russia, Ukraine, and France] reviewing “Minsk” and honestly saying: here is what works, here is what can works, here is what will never work.”

The Kremlin, for its part, has not budged from its insistence that the Minsk Protocols must be implemented in their entirety. There is also little appetite in Berlin, and the broader EU security architecture, to meaningfully revise the Minsk protocol, with a recent joint statement by Germany, France, and Poland noting that the “Minsk Agreements remain the sole basis for the resolution of the conflict in the East of Ukraine. They underline the need to fully implement the measures agreed by the parties on the occasion of the Normandy Summit in Paris in December 2019.”

It remains to be seen how Washington (which is not a member of the Normandy Group or a party to the Minsk Format) under a Biden administration will address itself to concerns over the viability of the Minsk agreements, and to the ongoing Donbass conflict more broadly.