Why The Russian Cabinet's Resignation Was Good News For Vladimir Putin 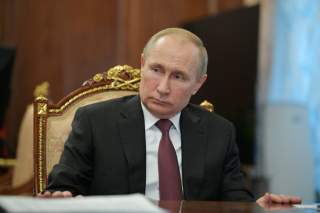 Key point: If we take Putin at his word, that he does not plan to be president again, but...

Russian president Vladimir Putin dropped a bombshell on Wednesday during his 2020 state of the union address to legislators. He announced a raft of constitutional amendments that, if enacted, would transform the Russian political system. In response, Prime Minister Dmitry Medvedev offered the resignation of the country’s entire Cabinet so that Putin could form a new government to oversee the changes. Putin did not invite the outgoing premier to head the new government. Instead, he nominated the head of Russia’s tax service, Mikhail Mishustin, to be the next prime minister.

Putin had apparently given no warning to Russia’s political elite that he would make these proposals, and the aftershocks of his announcements—and Medvedev’s resignation—are only beginning to be felt. One thing is clear: after months of speculation about who would drive the succession question—when Putin is constitutionally mandated to step down from the presidency in 2024—Putin has regained the initiative. Moreover, given that these reforms are expected to be put to a popular vote, he now has a Napoleonic-style referendum with which to mobilize the population and seek the public imprimatur of a new mandate for reshaping Russian politics for the 2020s.

Medvedev is not being cast aside. Instead, he will assume a new position as the deputy head of the Security Council, a position that is being described in some circles as a de facto vice president. How other ministers will fare is unclear at this point. Putin has the opportunity to accelerate his project of generational change within Russia’s political establishment by bringing in new faces and testing new cadres. Medvedev and his team can also serve as political scapegoats for the lackluster recovery of the Russian economy in the past few years (a reason for Putin’s parting comment to Medvedev that “not everything works out” with the economic recovery). Finally, with signs that major European powers, starting with Germany, are poised for a reset with Russia, a new and “fresh” government—with a new prime minister—helps to create the impression that the unpleasantness of the 2010s can be put behind both sides.

But the long-term impacts remain unclear. Whereas Leonid Bershidsky argues that Medvedev, while remaining a part of Putin’s power structure, is now on a glide path towards retirement, Dmitri Trenin counters that Medvedev, by assuming the deputy position at the Security Council, remains in line to succeed Putin.

It is also unclear how long Mishustin—a technocrat with no independent power base in the Russian establishment—will remain as prime minister. Given Putin’s emphasis in his address on improving economic conditions, Mishustin, who has overseen the modernization of tax collection in Russia and increases in revenue to the state treasury, is likely to be asked to focus on getting the Russian economy through the hump of the next two years and to lay the foundations for Putin’s Arctic development plans by ensuring sufficient capital is on hand to sustain those investments. Reassuring foreign investors that some of the arbitrariness of the past several years is going to be replaced by predictability may also be part of his mandate—especially the Asian and Middle Eastern investors that have been courted by the Kremlin.

Other leading figures may or may not retain their portfolios. One could envision Foreign Minister Sergei Lavrov transitioning to becoming Russia’s point man on the Middle East, in order to allow a new face to interact with the West. In contrast, energy minister Alexander Novak may need to be retained in order to shepherd the Russia-Saudi Arabia relationship that sustains OPEC Plus arrangements for global oil markets. But what we are likely to see is the beginning of a four-year-long version of “Russia’s Got (Government) Talent” as a new generation of managers, ministers and diplomats are tested out.

This all feeds into the great succession question of 2024—and what role Putin plans to play. Given the constitutional amendments, he appears to be laying out a series of different options. If we take Putin at his word, that he does not plan to be president again, then that would explain why the powers of the presidency would be weakened after 2024. The role of the Duma to select the government would be enhanced and the prime minister would have increased power and authority—but would also become formally responsible to the parliamentary majority and subject to recall and replacement. Finally, the State Council would acquire new and formal status and control over parts of Russian foreign and domestic policy.

So, I see Putin keeping his options open. He could return to the premiership or he could remove himself from the day-to-day challenges of governing but retain an all-important veto power by becoming head of the parliament and/or chairman of the state council. But what all of these changes would allow is a leadership transition but one on Putin’s agenda and with him surrendering key levers of power on his own timetable. In this, Putin appears to be emulating steps taken both by Lee Kuan Yew in Singapore and Nursultan Nazarbayev in Kazakhstan (and Nazarbayev’s steps, in turn, appear to be based on a variant that was prepared for Putin’s consideration in 2008).

This represents a major challenge to U.S. policy, which seems to be predicated on waiting for the “day after” Putin before any sort of normalization of U.S.-Russia relations can take place. It means that Putin may not fully depart from the Russian scene for years after 2024. At the same time, if the power that is concentrated right now in the Russian presidency is partially redistributed to several figures, it could create the basis for a “collective Putin” to assume different pieces of the power puzzle under the supervision and guidance of “elder Putin”—ensuring that his vision and approach will continue into the mid-twenty-first century.

Nikolas Gvosdev is a senior Eurasia fellow at FPRI and editor of the National Interest. This article was first published last month.