Why Russia's Most Deadly Rocker Launcher Could Soon Be a Threat to U.S. Troops 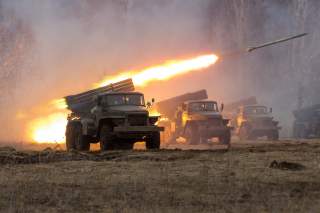 For the first time, the Russian government has granted permission to export the 9A52-4 Tornado-G multiple rocket launcher.

That's good news for Tornado-maker Rostec, the Russian state-owned arms manufacturer. But it's not good news for American troops, who have been under fire from Russian-made artillery in various wars since 1950.

Rostec “has obtained the necessary permission to demonstrate the Tornado-G MLRS abroad,” according to a company announcement.

“The system is expected to evoke the interest of potential foreign customers and will be able in the future to replace Grad systems operational in more than 60 countries of the world.”

The Tornado may not be a household word, but its predecessor, the BM-21 Grad, certainly is.

First deployed in the early 1960s, the Grad (itself a descendant of the legendary World War II Katyusha) is used by numerous nations, including North Korea, Iran and Vietnam. It is a truck-mounted weapon with forty launch tubes that can saturate more than two acres of ground in a single salvo.

The Tornado, first deployed by the Russian in 2011, is an improved Grad with more lethal upgrades. The Tornado-G version has a rotating launcher mounted on a Ural 4230 6x6 truck . It can fire forty 122-millimeter rockets with a range of about twenty-five miles. The Tornado-G can fire cluster warheads with self-guided anti-tank sub-munitions.

The Tornado-S version heavier three-hundred-millimeter rockets. A 2016 Sputnik News article, breathlessly titled “Russian Tornado-S Rocket Systems Deliver Blow That Rivals Nuclear Blast,” described the Tornado-S as having a range of seventy-five miles and able to blast an area of 2.6 miles. Unlike the Grad, which was essentially Second World War technology, the Tornado system is equipped with GLONASS satellite guidance (Russian GPS) to enable the launch vehicle to pinpoint its own location for more accurate fire.

In addition to the venerable Grad,  the Tornado is slated to replace several Cold War multiple rocket launcher systems, namely the Smerch and Uragan MRLS.

It remains to be seen which, if any, nations will buy the Tornado-G from Russia.

While Soviet multiple rocket launchers were ubiquitous in East Bloc and any number of Third World armies, one virtue of a weapon like the Grad was that like other Soviet weapons, it was relatively cheap, simple, capable of delivering a sudden deluge of high explosive, and able to quickly scoot away after firing before the enemy can hit back. It was self-propelled artillery on the cheap, unlike the expensive tank-like self-propelled howitzers favored by the United States. Even if the accuracy of the earlier rocket artillery left something to be desired,  it was good enough for a typical African or Asian brushfire war.

The Tornado seems closer to the American model of higher-tech weapons, with satellite guidance for the launch vehicle and self-guided guided warheads atop the rockets. This suggests a higher level of maintenance and skill will be needed to operate the system, perhaps beyond the capacity of the more threadbare Third World armies. But it could be operated by more sophisticated militaries such as Iran and North Korea.

Just as airpower has been the quintessential symbol of U.S. military power since 1941, so rocket artillery has been quintessentially Russian since the first Katyushas terrified Nazi soldiers outside Moscow. While America has the M270 Multiple Rocket Launch System and the smaller High-Mobility Artillery Rocket System (HIMARS), they don't occupy the same place that rockets do in the Russian arsenal.

One reason is that the United States prefers highly precise guided weapons rather than brute-force area-effect weapons like multiple rocket launchers. Russia feels otherwise. “Despite the emergence of high-precision and ‘smart’ weapons, multiple rocket launchers remain an effective weapon against ground targets,” Sputnik News assured its readers in 2017.

“Even the Americans, with their predilection for smart weapons, readily use their MLRS and HIMARS systems in Iraq and Afghanistan. Still, the Western MRLs are no match for their Russian counterparts as this country has always been the hands-down leader in the development of such weapons.”

Image: Ministry of Defense of the Russian Federation. Wikimedia Commons