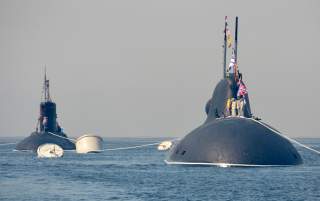 On November 10, 2015, Russian media accidentally-on-purpose revealed a glimpse into the Kremlin's new underwater weapon—the "Kanyon" or Status-6 nuclear-powered, nuclear-armed drone. Since then the debate swirling around the device, such as whether it is real, its practicality, military use and history. This has produced a picture of a very old idea reborn into a new and dangerous age.

The Kanyon UUV (unmanned underwater vehicle) as described and illustrated is a very, very large torpedo almost eighty feet long and five feet in diameter. Fitted with a monstrous 100-megaton nuclear warhead and propelled by a nuclear power plant, Kanyon is designed to create radioactive tsunamis in ports and coastal areas.

Seaborne explosive platforms have a long history in warfare. "Fire ships," where vessels set aflame and set drifting into fleets at anchor, and have been used for centuries. In 1585 the Dutch rebels of Antwerp, besieged by Spanish troops hired Frederico Giambelli, a clever Italian engineer, to create the "hellburner"—a floating bomb set off by clockwork or slow-match. The results were spectacular, but not decisive, at Antwerp. However, the mere existence of such weapons caused the Spanish to panic at the sight of regular fire ships and ruined Spain's hopes for invading Britain.

Early in the Manhattan Project the great weight and size of a potential nuclear weapon suggested delivery by barge rather than aircraft, though just how an enemy barge could be slipped into the Kiel Canal or Tokyo Bay remained unsolved. The thought, however, worried Americans charged with coastal defense. The first military atomic bomb, "Little Boy," was initially designed as a naval weapon—an air-dropped bunker-buster for destroying reinforced submarine docks. Furthermore, Operation Crossroads, the 1946 nuclear tests at Bikini Atoll that gave us indelible images of a watery mushroom cloud rising from a lagoon, drove home the consequences of naval nukes.

Soon after the Soviet Union developed its bomb, its leaders sought any means of delivering it. While the early Soviet weapons were gravity bombs for aircraft, the Soviet Navy also reached for the nuclear sword. In 1952 secret meetings in the Kremlin—which the Navy was not a party to—authorized the development of a giant atomic torpedo, the T-15. The new November-class, the USSR's first nuclear-powered subs, were to be fitted with a single giant tube over one-fifth the sub's length to house the massive weapon.

Once they were informed the Navy brass was not happy with the T-15. Its enormous power could only be brought to bear by a single, one-shot sub, which had to close within 30 miles of its target to fire the weapon.

The T-15 was quietly canceled in 1954, but the idea briefly found a curious champion in Andrei Sakharov, the "father of the Soviet hydrogen bomb." After successfully building and testing the colossal "Tsar Bomba" in 1961 Sahkarov proposed delivering the gigantic weapon via giant torpedo. Again the Soviet Navy demurred, finding no military need and real ethical problems with such a thing.

That seemingly was the end of the nuclear hellburner—even at the height of the Cold War it was too much, too crazy and too little. But today we live in interesting times, and it seems no idea is crazy enough to stay buried. Besides, another bit of Cold War tech may have solved the giant torpedo's range problem.

A five-foot-diameter hull is enormous for a torpedo but tiny for a manned sub; nuclear submarines are much bigger than conventional subs because the reactor and steam machinery take up so much space. But a different kind of engine—a "jet-engine-in-a-bottle"—might be the Russian solution. All nuclear-powered vessels afloat today are in fact steamships; nuclear heat replaces fossil fuel burning to boil water.

America's ill-fated and expensive nuclear-powered aircraft program produced designs for closed-cycle nuclear gas turbines (CCNGT). General Electric also explored the technology for marine propulsion. In a CCNGT the turbine is placed in a sealed container filled with inert gas such as helium or nitrogen. The nuclear energy heats the gas and compressors force it through the turbine where power is produced; the gas is re-compressed and reheated without ever leaving the container, and the turbine could power a generator that powered a propeller.

Russian sources discuss small autonomous power plants to be placed on the seafloor, and their internal plans follow conventional pressurized-water reactor plants. But Russia has long experience with gas turbines, including giant compressors for natural gas, and it is possible that the CCNGT engine may join the giant warhead as resurrected ghosts of the 1950s.

If Kanyon were simply a propaganda weapon, it would fit ably into a wider narrative of Russian disinformation. But the Pentagon thinks Kanyon is real enough, and Russia never lost the undersea skills it inherited from the USSR, even during the bad days of the 1990s.

Though one commentator called it the "world's slowest and most vulnerable ICBM" Kanyon could indeed work as advertised, as a kind of underwater cruise missile. Launched from a sub in mid-ocean, Kanyon could loiter at slow speeds for weeks, working its way in towards a coast, until it made a high-speed dash into a port. American antisubmarine warfare skills are rusty, and manned subs have escaped the U.S. Navy before. Therefore, a 100-megaton minisub would still be a small needle in a vast wet haystack.

Image: Russian submarines sail during a rehearsal for the Navy Day parade in the far eastern port of Vladivostok, Russia, July 30, 2016. REUTERS/Yuri Maltsev