Why the Shanghai Cooperation Organization Was Absent in Kazakhstan 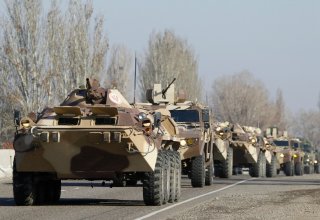 Two regional security organizations arose after the collapse of the Soviet Union in the Commonwealth of Independent States (CIS). The Collective Security Treaty Organization (CSTO) was formed in 1992, followed by the Shanghai Cooperation Organization (SCO) in 2001. Kazakhstan is a founding member of both organizations. The original five members of the “Shanghai Group” in 1996 were Russia, China, Kyrgyzstan, Tajikistan, and Kazakhstan. That group grew into the SCO in 2001.

Protests and violence erupted in Kazakhstan in January 2022 after a sudden, sharp increase in liquefied gas prices. At least 8,000 people were arrested and dozens died, including citizens and police. Kazakh president Kassym-Jomart Tokayev requested military assistance from the CSTO on January 5, 2022 “to help Kazakhstan overcome this terrorist threat.”

In the wake of this request, the CSTO intervened and deployed forces to suppress and control the protests and violence. The response was reminiscent of the Soviet Army’s intervention in the Prague Spring in Czechoslovakia in 1968. Meanwhile, the SCO had no serious and practical reaction. It wasn’t until five days after the protests began, when the CSTO and Kazakh security forces had taken control of the situation, that a spokesperson for China’s Foreign Ministry told reporters on January 7 that “China and other SCO members … are willing to play a positive role in stabilizing the situation.”

Why did Tokayev request military assistance from the CSTO but not the SCO? If Kazakhstan’s leaders and officials declared the protests and violence a “terrorist threat,” why not seek help from the Regional Counter-Terrorism Structure of the SCO in Tashkent, Uzbekistan? When protests and violence escalated, why did Kazakhstan’s political and security officials first turn to the CSTO?

To answer those questions, six points should be considered:

First, the structure of the CSTO is Russian, but the structure of the SCO is Russian-Chinese. The CSTO includes Russia, Kazakhstan, Kyrgyzstan, Tajikistan, Belarus and Armenia. These countries have longstanding historic, linguistic, and cultural ties that bring them together. The shared experience of living together under Tsarist Russia, the Soviet Union, and the Commonwealth of Independent States (CIS) binds them together. In fact, although three decades have passed since the end of the Soviet Union, these countries still often think and act like Soviet republics in critical times. There is no such shared history or experience between these countries and other SCO members such as China, India, and Pakistan. Therefore, when Kazakhstan finds itself in a critical situation amid protests and violence, the country’s leadership turns first to the CSTO, not to the SCO.

Second, the CSTO has only six members (Russia, Kazakhstan, Kyrgyzstan, Tajikistan, Belarus, and Armenia), and all share close political ties. This makes the CSTO far more cohesive and responsive than the SCO, which also includes Pakistan and India along with several other observer states and partners. It’s more difficult for the SCO to undertake immediate action in times of crisis, which is why Kazakh leaders felt the CSTO would react faster. Critics and opponents, especially those from Central Asia, of the SCO’s expansion have said it is already too far-reaching. Recent events in Kazakhstan may be a testament to these critics’ arguments.

Third, the SCO is not codified as a “Collective Security Treaty,” unlike both the Warsaw Pact and NATO. Article 4 of the Warsaw Pact and Article 5 of the North Atlantic Treaty call on members to defend each other in the event of an attack. There is no obligation in the SCO Charter for members to defend one another against military aggression. In this regard, the CSTO, and not the SCO, takes on the function of collective security. The “goals and tasks” in Article 1 of the CSO Charter call for members to “jointly counteract terrorism, separatism and extremism in all their manifestations” and “cooperate in the prevention of international conflicts and in their peaceful settlement.” By contrast, Article 3 of CSTO charter states that the “goals of the Organization shall be strengthening of peace, international and regional security and stability, protection of independence on a collective basis, territorial integrity and sovereignty of the Member States, in achievement of which the Member States prefer political means.” The difference in the CSTO’s and SCO’s commitment to collective security seems to have been influential in the Kazakh government’s decision to seek assistance from the CSTO.

Fourth, the SCO’s approach to dealing with regional and international crises has been largely passive in the last two decades. Unlike the Warsaw Pact and NATO, which have been active in regional and international conflicts and crises even outside Europe and North America, the SCO has not taken any such actions. A clear example of this is the SCO’s silence and inaction in the face of the crises in Georgia (2008), Syria (2011), and Ukraine (2014). The Russian Federation militarily intervened in all three conflicts, but the SCO took no action. In this respect, the practical approach of the CSTO is very similar to that of NATO and the Warsaw Pact.

It is understandable that many observers view the CSTO’s deployment to Kazakhstan as similar to the approach of the Warsaw Pact in Czechoslovakia in 1968. The CSTO was formed in the midst of a civil war in Tajikistan in 1992, and the organization played an important role in maintaining security and stability in the country and Central Asia. Over the past two decades, the SCO’s passivity and the CSTO’s activism vis-à-vis regional and international crises have played important roles in the decision of Kazakhstan’s leaders to use the CSTO to suppress protests and violence.

Fifth, the CSTO’s Collective Rapid Reaction Force allows it to intervene quickly in the event of a crisis in member countries, unlike the SCO. The Collective Rapid Reaction Force, established in 2009, is designed to respond quickly to threats to the security of CSTO member states. The total force numbers 18,000 people in units from the armed forces of the CSTO member states supported by modern weapons and equipment. It also includes special forces and “units from internal affairs bodies (police), security bodies and special services, as well as authorized bodies in the field of prevention and liquidation of consequences of emergency situations.” The structure of the rapid reaction force in the CSTO is similar to the structure of the “rapid reaction force” and the “special units” in the police and security forces within the country. This allowed the organization to react quickly to the unrest in Kazakhstan. But there is no such structure at a similar level with comparable features in the SCO. Despite the “Regional Counter-Terrorism Structure” of SCO in Uzbekistan, there is no such cohesive and coordinated task force in the organization.

Finally, Kazakhstan’s protests and violence posed a different threat to Russia, which plays a pivotal and leading role in the CSTO, than to China, India, Pakistan, and the other SCO members. China’s strategic threats are in East Asia and the Asia-Pacific region. India and Pakistan’s strategic threats come from Afghanistan and South Asia. But Russia’s strategic threats are to the west and the surrounding areas in the ​​CIS, which the Russians refer to as their “near abroad.” Moscow viewed the protests and violence in Kazakhstan as part of a larger picture along with Ukraine and the Black Sea, Belarus, and the Caucasus. In Russia’s view, these developments are part of a Western project to put pressure on Russia. For this reason, Russian president Vladimir Putin said on a videoconference of CSTO members on January 10, 2022, that “We will not allow the realization of so-called color revolution scenarios.” The Kazakh leadership seems to have recognized that protests and violence in Kazakhstan were a greater concern for Russia than China, India, and Pakistan, allowing the threat to be addressed within the CSTO.

These six points explain why Kazakhstan turned to the CSTO rather than the SCO when faced with protests in January 2022. While each organization plays an important role, the CSTO was much better suited to respond to upheaval in Kazakhstan. It was always likely to play a central role in the protests.

Vali Kaleji is Ph. D. in Regional Studies, Central Asia, and Caucasian Studies. He has written on Eurasian issues at the Jamestown Foundation (Eurasia Daily Monitor), the Central Asia-Caucasus Institute (American Foreign Policy Council), The National Interest, and the Valdai Club and the Russian International Affairs Council (RIAC). He can be reached at [email protected].