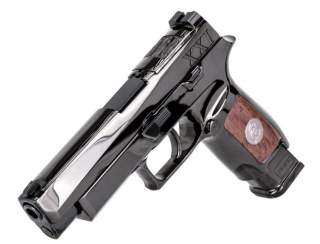 Key point: These guns were carefully made and carry unique engravings.

When the Sig Sauer M17 was adopted by the U.S. Army, Sig Sauer, Inc. jumped on the opportunity to create commemorative versions of the pistol for the Army’s 3rd Infantry Regiment, “The Old Guard,” which guards the Tomb of the Unknown Soldier at Arlington National Cemetery.

Only four commemorative M17s were created for The Old Guard, and each bears a name and specific theme: Silence, Respect, Dignity, and Perseverance. These names are inscribed on each pistol’s dust cover, the area on the frame in front of the trigger guard.

The pistols also feature a unique high-gloss finish. While by itself, this finish may appear somewhat gaudy and out of place, the pistols are meant to be carried in glossy black holsters by The Old Guard. When holstered, the pistols’ finish looks far more fitting.

The slide serrations are also replaced with “XXI”, a nod to the twenty-one steps the guards take on their path patrolling in front of the tomb and the twenty-one-gun salute. However, “XXI,” in roman numerals, may also be a nod to the modern nature of the pistol, given that the Army titled its turn of the century modernization effort “Force XXI”.

Various materials of significance are also incorporated into the pistol. The wood grips are crafted from the deck wood of the USS Olympia, which carried the first Unknown Soldier who died in WWI to the United States in 1921. Marble dust from the tomb itself is placed in a glass vial (likely using recesses normally used to hold vials of tritium gas) in the front sight.

The magazines also have some level of customization, each twenty-one-round magazine has an engraved base plate that features the same three words, Peace, Victory, and Valor. Finally, each of the unique four pistols has a special serial numbers that incorporates the date of the first watch stood over the tomb of the Unknown Soldier, 2 July 1937.

Some may try to compare Sig Sauer’s custom commemorative M17 to the custom commemorative Beretta M9s that came before it. The Old Guard’s Berettas were also custom jobs with glossy finishes, custom wood grips with inlaid Old Guard emblems, and other flourishes, but due to a lack of official materials, it’s unclear if the Berettas also incorporated historical materials to the same degree as Sig Sauer’s M17.

Regardless, Sig Sauer’s Custom Shop is likely grateful to the U.S. Army for the opportunity to showcase their work by equipping The Old Guard with their work. Ironically, the design for the M17 pistol was not led by an Army Soldier, but a Marine, Sig Sauer’s Tim Butler. But while the Army may guard the tomb, the tomb is meant as a memorial for all service members.

Charlie Gao studied political and computer science at Grinnell College and is a frequent commentator on defense and national-security issues. This first appeared in July 2019.