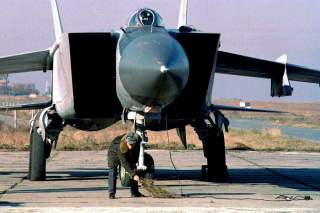 Key point: The Foxbat was a very good plane, but it looked scarier than its actual capabilities were. Yet, Moscow was able to export this fast interceptor all over the world.

The views expressed here are his personal views and do not necessarily reflect those of the Department of Defense, the U.S. Army, the Army War College, or any other department or agency of the U.S. government. This article first appeared in 2018.