Why the Stealth F-35B Could Truly Be a Game-Changer 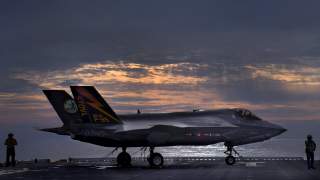 September 27, 2018 marked one of the most important milestones for the F-35 Joint Strike Fighter (JSF) program. On that date, the U.S. Marine Corps conducted the first combat strikes by the U.S. military employing the revolutionary fifth-generation fighter. Perhaps equally impressive, this mission in Afghanistan was conducted by the short-takeoff/vertical landing (STOVL) variant of the JSF, the F-35B, from an amphibious warfare ship. These aircraft were part of the 13th Marine Expeditionary Unit (MEU) deployed aboard the Essex Amphibious Ready Group (ARG) operating in the Persian Gulf.

Intended to replace the Marine Corps’ fleet of obsolescent AV-8B Harriers, the F-35B represents a geometric increase in at-sea air capabilities. The F-35B can fly farther with a heavier weapons load than the AV-8B. Even more importantly, the JSF’s stealthiness and suite of advanced sensors provides the MEU/ARG with unequalled intelligence, surveillance and reconnaissance (ISR) capabilities.

But improvements in range and payload do not properly tell the whole story when it comes to the F-35’s impact on air warfare. The JSF will totally upend the force exchange ratios between U.S. and coalition airpower and that of prospective adversaries. Lt. Gen. Jon Davis, the U.S. Marine Corps’ deputy commandant for aviation, explained the JSF effect this way: “The F-35’s—twenty-four to zero kill ratio—killed all the targets. It was like Jurassic Park, watching a velociraptor—kills everything, does really well. We can’t get that airplane fast enough into the fleet.”

The F-35B allows large deck amphibious warfare ships to undertake missions that until now would have required an aircraft carrier strike group. As a result, the range of force employment options available to theater commanders is significantly expanded. In addition, F-35B-equipped ARGs allow the U.S. Navy to alter the way it deploys forces and manages the new dynamic force employment concept. According to Vice Admiral Scott Stearney, commander of U.S. Naval Forces Central Command,

“The F-35B is a significant enhancement in theater amphibious and air warfighting capability, operational flexibility, and tactical supremacy. As part of the Essex Amphibious Ready Group, this platform supports operations on the ground from international waters, all while enabling maritime superiority that enhances stability and security.”

The deployment of the F-35B is of strategic as well as operational and tactical significance. The navy has ten large deck amphibious warfare ships deployed or under construction. Consequently, with a sufficient number of F-35Bs, the number of navy ships capable of operating fifth-generation aircraft will double. As a result, the Sea Services will have an expanding range of deployment options available.

Equally important, amphibious warfare formations capable of operating the JSF present a new range of dilemmas to potential adversaries. Forward-deployed MEU/ARGs will operate from the start of major conflict from within an advanced adversary’s anti-access/area denial envelope. From this position they can act as an advanced strike/ISR capability, threatening the integrity and timing of enemy offensive operations and simultaneously providing critical targeting information for joint long-range strike systems.

What if the F-35B were proliferated to allied and friendly navies that currently possess ships capable of operating a STOVL aircraft? Currently, only two countries have committed to acquiring the F-35B. The United Kingdom plans to procure 138, which the Royal Navy will operate from its two new aircraft carriers, the HMS Queen Elizabeth and the HMS Prince of Wales. Earlier this year, F-35Bs conducted flight trials to demonstrate their ability to operate from the HMS Queen Elizabeth.

The other country is Italy, which plans to buy ninety F-35s in a mix of sixty F-35As for it air force and thirty F-35Bs for the navy. The Italian Navy would operate twenty-two F-35Bs aboard its new Cavour STOVL aircraft carrier. A second aircraft carrier is under construction and could also support STOVL aircraft.

Today five other U.S. allies—Australia, France, Japan, Spain and South Korea—operate about a dozen large deck naval ships potentially capable of handling the F-35B. Potential future partners in the global F-35B network could include Turkey, India, Brazil and even Thailand. If planned ship procurements are factored in, there could be ten or more nations operating about two dozen modern F-35B capable ships by the end of the next decade.

The impact on the world’s military balance of a global force of nearly forty large naval combatants deploying hundreds of F-35Bs cannot be overestimated. Such a capability could propel the U.S. Navy’s concept of distributed lethality to new heights. NATO alone could have a fleet of ten or more advanced strike platforms. Japan and South Korea could conceivably operate another eight to ten. Supplemented by U.S. nuclear-powered aircraft carriers and large deck amphibs, these combined forces would pose a serious challenge to Russian forces in the Mediterranean, North and Arctic Seas and to China’s Navy in the Western Pacific.

It will not be enough simply to drop a flight of F-35Bs on a flight deck to create a capability. To make use of the JSF’s unique collection of sensors and communications capabilities, all the ships operating F-35Bs would have to be upgraded with new command, control and communications capabilities. There would need to be a network connecting these fifth-generation aircraft with their fourth-generation counterparts. In addition, procedures would have to be developed to exploit the massive amounts of data collected by the F-35Bs and to ensure that actionable intelligence and targeting information were transmitted to the ships and aircraft that could make use of it.

Of course, for such a future to unfold, it would have to begin with the leadership of the U.S. Navy changing the way it thinks about amphibious warfare platforms. Rather than treating these ships as toys for marines, they need to embrace the potential offered by F-35B-equipped large deck amphibs to play a critical role in enhancing global deterrence and to serve as a unique first-day-of-the-war strategic capability should deterrence fail.