Why Switzerland Has Voted ‘Yes’ On Getting New Fighter Jets (Maybe F-35s?) 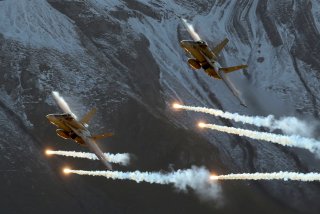 One of the particularities of Switzerland is the broad say its citizens have in political issues—even in matters of national security and defense. This Sunday, the Swiss electorate voted to purchase new fighter aircraft by the end of the decade. Even though poll ratings had predicted a conclusive result, the referendum wound up hanging in the balance. With fewer than 9,000 votes making the difference, the electorate very narrowly rejected the opponents’ claim that “expensive luxury fighter-planes” were a waste of resources and that a fleet of cheaper jet trainers along with a modern air defense would suffice for the air force to fulfill its core mission of upholding the Swiss airspace’s sovereignty.

The vote is a landmark decision for the future of the Swiss Air Force, which had been characterized mostly by reorganization and downsizing over the last three decades. The fleet of several hundred fighter aircraft fielded throughout the Cold War has continuously shrunk to initially thirty-four, now thirty, F/A-18 Hornets (and some forty-seven F-5 Tigers remaining for training purposes) that are set to be phased out by the end of the decade. The reduction in fighter jets was accompanied by a decrease in the number of operational airbases and mirrored the overall downsizing of Swiss Armed Forces troop levels following the end of the Cold War.

At the same time, the collapse of the Iron Curtain also coincided with a heretofore unheard of scrutiny toward the Swiss army within parts of the population. After more than one-third of the electorate had endorsed a popular initiative to abolish the army in 1989, an even higher percentage (42.8 percent) voted, albeit unsuccessfully, against the planned purchase of the abovementioned F/A-18s in June 1993. More critically, with the Swiss Armed Forces and the defense ministry now put on notice, the 1993 vote may have led to the unwritten agreement that the government will consult the people for any future aircraft purchase. Such was the case in May 2014 when voters derailed the government’s plan to replace the aging Tiger fleet with twenty-two Swedish Saab JAS-39 Gripen aircraft. For the first time in decades, the army was defeated at the ballots.

What has changed in the past six years? For once, rather than voting on a specific aircraft, the electorate had to decide in principle on a credit of 6 billion CHF (approximately 6 billion USD) allocated from the army’s regular budget to buy a new multi-role fighter-jet—with the exact type and number of aircraft yet to be determined. The purchase’s opponents predictably decried this “blind bargain,” but the defense ministry made sure to avoid the mistakes of the previous vote when even some army-friendly politicians had questioned the Gripen’s suitability in the run-up to the vote.

This time, the proponents of the deal closed ranks and ran a more disciplined campaign, even exhorting aircraft manufacturers to keep quiet and refrain from intervening in the public debate prior to the vote. They also benefited from the fact that Federal Councilor Viola Amherd, who had become the country’s first female defense minister in 2019, enjoys a broader appeal than her predecessors had.

Just as importantly, the vote may also point to a deeper shift in how the Swiss people perceive changes in their security environment. The past five years, which saw armed conflicts on Europe’s periphery, refugee crises, and terrorist attacks across the continent, may contribute to increased levels of appreciation for the Swiss army’s necessity. An annual study by the Military Academy at ETH Zurich and the Center of Security Studies confirms as much. While opponents of the vote were at pains to argue that fighter jets were useless against cyberattacks or pandemics, the majority of the electorate seemed more inclined to accept Federal Councilor Amherd’s case that Switzerland simply cannot afford to be unprepared for future threats to its airspace.

What will happen next? For now, four aircraft types (the Boeing F/A-18 Super Hornet, Lockheed Martin F-35A, Dassault Rafale, and Airbus Eurofighters) remain in evaluation (Saab withdrew its new Gripen-bid last year). The Swiss government plans to announce its decision next summer (along with the selection of a new ground-based air defense system for 2 billion CHF, which forms the second leg of the defense ministry’s Air2030 program but was excluded from the referendum). While the Federal Council will consult the official evaluation reports prior to its decision, political calculations based on the manufacturers’ countries of origin will likely play an important role, too. Then, in 2022, the government intends to ask parliament for formal approval of both fighter jets as well as the air defense system that is finally set to roll out between 2025 and 2030.

There is a long road ahead until the air force will receive its new aircraft and new obstacles might emerge. Immediately after the vote, opponents raised the possibility of a popular initiative against the purchase, particularly if the Swiss Government were to select a U.S. aircraft type. On the other hand, it is not clear how Air2030 might affect the modernization of the Swiss army’s ground forces, projected to cost another 7 billion CHF. The modernization programs follow the assumption that the defense budget will grow substantially over the next decade. Just a few days before the vote, the Swiss parliament agreed on an increase from 20 billion CHF for the four-year-period 2017-2020 up to 21.1 billion CHF for 2021-2024. At the same time, politicians have already cautioned that the defense budget might be subject to austerity measures in the wake of the COVID-19 pandemic. Whether the schedule for a comprehensive modernization of the Swiss Armed Forces will prove feasible under such circumstances remains to be seen.

Michel Wyss is a Scientific Assistant for Strategic Studies at the Military Academy at ETH Zurich, a lecturer at the Department of Humanities, Social and Political Sciences at ETH Zurich, and PhD Candidate at the Institute for History, Leiden University. The views expressed in this article are the author’s own and do not represent the views of the Swiss Government, the Federal Department of Defense, Civil Protection and Sport or the Swiss Armed Forces.