Why Tactical Nukes Are a No Good, Very Bad Idea 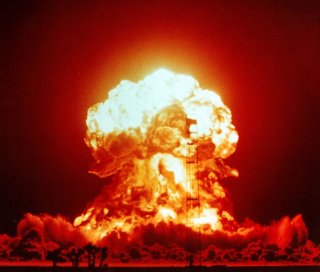 Key point: "Small" nukes assume it is possible to cross the nuclear threshold without causing further escalation, but that is likely not the case.

The Democratic lawmakers who control the U.S. House of Representatives are pushing back against Pres. Donald Trump’s plan to expand the United States’ nuclear arsenal with new and smaller “tactical” weapons.

The Democrats’ version of the 2020 National Defense Authorization Act, which funds the military, faces opposition in the Republican-controlled Senate, as well as from the president himself. Trump has threatened to veto the NDAA, potentially setting up a budgetary showdown that could force the Pentagon to operate on so-called “continuing resolutions” that essentially copy previous years’ budgets.

Trump in 2017 laid out a plan for a host of new and modernized nuclear weapons, including less-powerful nukes that some hardliners believe are more useful than larger-yield weapons are and could make limited atomic wars feasible and survivable on a planetary level.

But many nuclear experts disagree. No nuclear war is “small,” they argue. And any nuclear war would be devastating for the entire human race and the only planet that’s known to support life.

The House bill “signals a new, much-needed change in direction for U.S. nuclear weapons policy, one that would reduce the nuclear threat and cut some spending on these weapons,” wrote Eryn MacDonald, an expert with the Union of Concerned Scientists in Massachusetts.

The House bill stands in stark contrast with the version the Senate passed easily in late June [2019], which would fully fund the Trump administration’s nuclear programs and in some cases even increase funding.

We support passage of the House version of the NDAA; if its version becomes law, it will be a victory not only for U.S. security, but also for common sense.

The House bill is chock-full of positive provisions. For example, it would prohibit deployment of the Trump administration’s new ‘low-yield’ nuclear warhead; cut funding for an unnecessary replacement for the current ground-based intercontinental ballistic missile; and reduce the excessive, but congressionally mandated, requirement for the number of plutonium pits that the National Nuclear Security Administration has been told to produce.

The House’s version of the NDAA defunds the W76-2 low-yield warhead for the U.S. Navy’s Trident submarine-launched ballistic missiles, which MacDonald described as “an ill-conceived attempt to lower the threshold for nuclear war.”

The W76-2 “would thrust U.S. ballistic-missile submarines into regional conflicts instead of reserving them for their crucial role as a nuclear deterrent, providing a secure means of retaliation if they should ever be needed,” MacDonald added.

The Trump administration requested $19.6 million for the Navy to begin installing these new warheads on missiles later this year. The House defense authorization bill sensibly zeros out this money, but Republicans plan to offer an amendment to the bill on the House floor that would restore that funding.

Fortunately, the amendment is unlikely to pass. Republicans on the House Armed Services Committee have twice attempted to restore the money and failed along party lines both times.,

The House Appropriations Committee also eliminated funding for the low-yield warhead, and the full House already rejected an attempt to restore the W76-2 money in an appropriations bill by a 236 to 192 vote.

The Democrats also want to cut $103 million from the Ground-Based Strategic Deterrent, the intercontinental ballistic missile the U.S. Air Force is developing to replace the existing Minuteman III missile.

“The bill also initially called for an independent study of options that could extend the Minuteman III’s life to 2050,” MacDonald wrote. “This would postpone spending on the new ICBM, which some estimates expect to cost $100 billion.”

Republicans in the Armed Services Committee, however, succeeded in removing that study requirement. Fortunately, Rep. Earl Blumenauer (D-Ore.) has submitted an amendment that would restore a version of the independent study.

Extending the life of the Minuteman III instead of building a new missile is a reasonable, cost-saving option that could facilitate an eventual phase out of the land-based leg of the U.S. nuclear triad as the older missiles reach the end of their lives.

The House could vote on its version of the NDAA by early July 2019, after which the House and Senate would reconcile their competing versions of the authorization.

The president could veto the resulting conference bill. No only has Trump objected to the Democrats’ cuts to nuclear weapons, he also opposes language in the House NDAA that would limit the president’s ability to divert military funding toward his signature campaign initiative: a wall along the southern border that Trump claims would stop migrants from crossing into the United States in order to seek asylum.