Why the Taliban Will Struggle to Rule Afghanistan 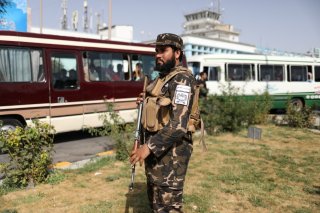 The Taliban appear to be in total control of the situation in Afghanistan for the time being. Right now, the calm that the Taliban are witnessing—outside of Panjshir, where the resistance against the Taliban continues—may actually be the calm before the storm, as is usually the case in Afghanistan. The challenges that the Taliban have inherited and the blunders that they have committed over the last month have undermined their legitimacy and will serve as a stumbling block in their path to rule Afghanistan. As such, the Taliban's honeymoon period is coming to an end soon.

The Taliban's first blunder was releasing all prisoners after capturing government-run prisons and detention centers across Afghanistan. Had the Taliban only released their own members, it would have been justifiable in the context of the conflict. However, the Taliban’s release of thousands of professional criminals and terrorists, such as the leader of the Islamic State Khorasan Province (ISKP) Omar Farooqi and other ISKP members, cannot be justified on any grounds. Now that a large number of hardened terrorists who constitute a major security threat are on the loose, it is doubtful whether the Taliban have the capacity, or the will, to re-arrest them.

The Taliban’s second blunder was attacking Panjshir province instead of trying to reach a negotiated settlement with Panjshiris. Many Afghans do not understand why the Taliban could negotiate for two long years with the Americans but not for two weeks with Panjshiris. Although the Taliban have declared victory in Panjshir, their celebration is premature. The Ahmad Massoud-led National Resistance Front (NRF), which is native to Panjshir and knows the terrain well, still holds the mountains. Dislodging the NRF is a monumental task in which the Taliban's success is not guaranteed.

The Taliban's third blunder was allowing General Faiz Hameed, Pakistan's director-general of the Inter-Services Intelligence (DG-ISI), to appear publicly in Kabul. Ordinary Afghans have long suspected the Taliban to be working to further Pakistan's interests in Afghanistan. Although both Pakistan and the Taliban have denied these allegations, Hameed's overt visit to Afghanistan has badly damaged the Taliban's reputation and raised serious questions about the ISI's influence over it. Whatever the purpose and motives behind Hameed's visit truly were, it will take the Taliban some time (or perhaps a long time) to recover from this blow.

The Taliban's fourth and most serious blunder yet was the announcement of an almost mono-ethnic cabinet. The Pashtuns, who are estimated to be 40 percent—45 percent of Afghanistan's population, comprised more than 90 percent of cabinet appointments. There are no women, no Shias, and no Hazaras in the cabinet. To placate its domestic and foreign critics, the Taliban have labeled their cabinet as an interim one that will supposedly be replaced by a more permanent body sometime in the future. Given the Taliban's track record of lying and breaking their promises, there is little hope that they will keep their word this time around.

In addition to being mono-ethnic and Pashtun-centric, the Taliban cabinet is completely dominated by so-called semi-literate mullahs. Most cabinet members have no higher, professional, or vocational education, much less relevant education pertaining to their portfolios. Even their religious credentials seem dubious as most do not speak Arabic, the language used for teaching in madrassas in Afghanistan and Pakistan, and had to use interpreters to communicate with their Qatari hosts in the past. The Taliban’s cabinet looks more like the attendance sheet of a rural madrassa (if madrassas kept one at all) than a legitimate cabinet in the twenty-first century.

Challenges the Taliban are facing

To begin with, it is one thing to wage an insurgency, especially in Afghanistan where the terrain is helpful, but it is another thing to rule and govern a country as fractured along ethnic and linguistic lines as Afghanistan. The Taliban’s announcement of a mono-ethnic cabinet will certainly not help bring the fragile situation in Afghanistan under control. In addition, the desire for more rights and participation in society held by young Afghans, especially women, cannot be ignored. The Taliban can resort to violence to oppress dissent for now, but oppression in Afghanistan often backfires with disastrous consequences for the oppressor.

Secondly, since Afghanistan has always had a weak state, its collapse did not trigger widespread chaos. But Afghanistan is now on the brink of an economic collapse. The freezing of Afghanistan's assets in the United States and a sharp drop in international financial assistance are taking a toll on ordinary Afghans. For instance, making payments with debit and credit cards is rare in Afghanistan. Almost everyone pays in cash. As of this writing, Afghanistan’s banks, which are only accessible in Kabul and a few other large cities, are limiting weekly withdrawals to a maximum of 20,000 Afghanis (about $250). As both banks and a large number of Afghans are running out of cash due to the freezing of Afghanistan’s assets, even Afghans who were well-off under the Karzai and Ghani governments are becoming cash-strapped and struggling economically.

Additionally, a large number of urban Afghans worked as day laborers in the past. If they did not earn anything during the day, they would have little to eat at night. Most day laborers, having been unemployed for over a month, are now facing starvation. Moreover, government employees, teachers, and professors have not received their salaries since July. Compounding Afghanistan’s economic crisis, the Taliban’s summer offensive drove thousands of civilians into Kabul and other large cities, where the displaced can hardly afford to eat and are contributing to rising poverty levels in cities. Despite the ongoing economic hardship, Taliban fighters force civilians to feed them free of charge.

The Taliban’s oppressive approach to governance has so far been discouraging and has only contributed to the looming disaster. Severe droughts, Covid-19, and the ongoing conflict have simultaneously brought Afghanistan on the verge of a complete economic breakdown. At this point, around one-third of the Afghan population is facing starvation. The upcoming winter and heavy snowfalls will worsen the situation. Unless immediate assistance is delivered, especially to those parts of Afghanistan where snow falls will block roads until next spring, thousands will starve to death.

Thirdly, in early August 2021, the UN reported that there were more than 10,000 foreign fighters in Afghanistan. This was before the Taliban freed hundreds (or perhaps thousands) of additional foreign fighters from government-run prisons that they captured in August. The Taliban seem to have little control over these foreign fighters, especially the ISKP fighters whom the Taliban consider their mortal enemies. Furthermore, Tehreek-e-Taliban Pakistan (TTP) will also test the Taliban’s capability and commitment.

Pakistan wants to prevent the TPP from launching attacks against it from Afghan soil and has sought assurances from the Taliban in this regard. It is unknown if Pakistan is convinced that the Taliban will deliver on its promise that Afghan soil will not be used to stage attacks against Pakistan. Both the Taliban and the TTP—who have sworn allegiance to the Afghan Taliban leader—come from the same ethnic group and fill their ranks with Pashtuns who stride the Afghan-Pakistani border. They have a similar ideology, aim to impose and implement sharia in their respective countries, and their areas of operations overlap. In early July, Pakistan's Chief of the Army Staff General Bajwa and DG ISI Hameed told a group of Pakistani lawmakers that the Afghan Taliban and the TTP are “two faces of the same coin.”

Even if the Taliban were to violate the Pashtun custom of giving refuge to anyone who seeks protection by evicting TTP fighters from Afghanistan, it is doubtful whether the Taliban would have the capacity to translate their intention into action. The Taliban’s ragtag forces are thinly stretched across Afghanistan and can hardly afford to engage in a battle against TTP. A long, costly military operation against TTP—especially if coupled with military setbacks—will undermine the Taliban’s military credibility and puncture its claim of invincibility.

Fourthly, the Taliban’s desire to rule Afghanistan with a strong central government from Kabul will soon backfire. Historically, Afghans outside Kabul have had little regard for those in power in Kabul. Afghans are more loyal to their local, regional, and tribal elders than to those at the helm of power in Kabul and will thus resist any top-down change imposed from the capital. Afghanistan’s mountainous terrain, heterogeneous and diverse population, history of weak and ultimately failed central governments, and a lack of allegiance and respect by the Afghan population for the rulers in Kabul make decentralization and devolution of power from the center necessary. The Taliban, however, are moving in the opposite direction and thus laying the foundation of their own demise.