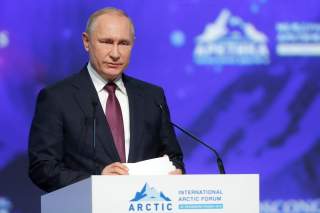 Key point: A cash-strapped Russia is seizing the newest resources in the Arctic circle, but is reliant on China to build the needed infrastructure.

Although the Arctic was a front line during the Cold War, the harsh climate and limited transit options also made it a relatively secure frontier in the post-Cold War era. And as a result, Russia's Arctic infrastructure and activity — particularly in the security realm — waned considerably as the country's priorities shifted elsewhere. But this has been changing in recent years, as the sea ice that has long barricaded Russia from the rest of the world begins to open up. Russian shipping in the Arctic recently reached levels not seen since the late 1980s, with Russian President Vladimir Putin highlighting Arctic shipping along the Northern Sea Route as a key development project for the country.

Moscow's renewed Arctic push, however, is less about allowing more transit through Arctic waters, but about exploiting mineral and energy reserves that will become more accessible as the climate shifts and technology advances. Upon its return to the Arctic, however, Russia will be forced to maneuver a landscape that has changed drastically since the Cold War — one where "near-Arctic" China is advancing its own interests, and where the United States is revisiting its Arctic security concerns. As a result, the gains from new extraction opportunities could turn into long-term security vulnerabilities for Russia, should its need for financial support end up handing Beijing an even clearer geopolitical advantage.

Opportunities Beneath the Ice

Following the Cold War, the Arctic seemed to slip back into its older position as a distant frontier to test the limits of technology and human endurance — and for many Arctic nations, it has remained a place of secondary importance at best. For Russia, however, the region's strategic significance never really waned. Moscow's Arctic territories — which comprises more than half of all Arctic coastline on Earth — still contribute some 15 percent of national gross domestic product (GDP), driven primarily by resource extraction. Some 40 percent of Canada’s landmass, for example, is considered "Arctic" (as defined by the government). But Canada’s three Arctic territories (Yukon, Northwest Territories and Nunavut), by contrast, comprise a mere half-percent of Canada’s total GDP.

Much of Moscow's mineral and energy resources in the Arctic remain untapped, buried in challenging terrain and environments in far-off locations. But changing climate patterns and advancements in technology are beginning to revive energy and mineral exploration in the region. Today, the core economic activity in the Russian Arctic takes place in the western half of the territory.

The Russian company Norilsk Nickel — the world's leading producer of palladium as well as a major producer of platinum — has its mining and smelting operations centered on both the Kola Peninsula (which is located along the Barents Sea, roughly 200 miles east of northern Finland), as well as near Dudinka on the Yenisei River (which empties into the Kara Sea).

In addition to mineral resources, some of Russia’s largest emerging natural gas projects are located on the Yamal Peninsula. This includes the Yamal liquified natural gas (LNG) project, which is jointly owned by Novatek, Total, China National Petroleum Corporation (CNPC) and the Silk Road Fund. The Yamal project has an annual capacity of 16.5 million metric tons of LNG, and is serviced by ice-hardened LNG tankers that can traverse the Northern Sea Route (NSR) along the Russian Arctic coast, operating in ice more than a meter thick without the assistance of icebreakers. Near the Yamal plant also lies Russia’s Arctic 2 LNG project, situated just across the mouth of the Ob River.

The Future of Transit on the Russian Arctic

With the melting ice, there has been heightened international attention around how Arctic shipping routes can provide a shortcut between Europe and Asia. And indeed, by taking the NSR, it takes roughly 15 days to deliver gas from the Yamal LNG project to China, compared with the 30 days it would take by going southwest (which requires looping around Europe and coming back through the Suez Canal).

But just like the Northwest Passage through Canada never panned out as a reliable and cost-effective shortcut between Europe and Asia, Russia's Northern Sea Route remains seasonal at best. Viable operations through the Arctic waters still require specialized ships, and Russian regulations (as well as seasonal variations in ice patterns) often require the added use of icebreakers. And even those vessels can only reliably operate in warmer months — limiting the commercial viability of projects in the area. And while the receding ice is gradually making the territory more manageable, it will still be many years before the promise of decreased shipping times will outweigh the upfront costs needed to transit through its still largely frozen waters.

Thus, as energy and mineral reserves become increasingly accessible, the main use of Russian arctic waters for the foreseeable future will remain what's known as "destination shipping" — that is, focused solely on bringing Russian commodities out to the market, or to bring foreign and domestic goods and services into the Russian Arctic. Of the 1,908 ship voyages that traveled within the NSR in 2017, for example, only 27 were full transits between Asia and Europe, or between further-flung Russian ports outside the NSR; the rest traveled between ports within the NSR, or were destination shipping.

That said, the increased use of the NSR for destination shipping still requires the same investment in communications, navigational aids, and response and rescue capabilities, which could pave the way for more transit traffic in the future. But for now, high-profile complete transits across the NSR — however infrequent — will likely serve as a way to attract additional external investment in the infrastructure, which it needs to both develop the necessary shipping infrastructure and capitalize on the expanded energy and mineral extraction from the region.

But this need for foreign revenue streams will also place Russia in a tricky situation with its nominal partner China, which is becoming an increasingly active player in the region. Despite many areas of common interest, Russian-Chinese relations remain framed by suspicion. In the modern era, the balance between the two neighbors has shifted dramatically. Not only is China no longer the second-tier power, but it has far surpassed Russia economically and is also, in certain aspects, on its way to surpassing Moscow politically and militarily.

But to continue to build out its Arctic capabilities and seize economic opportunities, Moscow also needs significant foreign investment and access to expanding consumer markets. And China's massive appetite for resources and its relatively large pocketbook provide both a market and the capital to do just that. But for Russia, this also comes at the risk of becoming overreliant on China, and further tilting the relationship in Beijing's favor — something Moscow will try to avoid.

Russia has thus sought to balance Chinese investment in Arctic LNG projects with European and Japanese firms, though this has been challenging given the ongoing sanctions regime. Moscow has also begrudgingly allowed China to partner in its infrastructure development along the NSR, but primarily to tie China into Russia’s plans, rather than allow China to build capacity to bypass Russian territory and transit fees.

The U.S.'s Return to the Arctic

Meanwhile, Russia's revived presence in the region — combined with China's growing activity — has also reawakened its other geopolitical rival, the United States, to the strategic importance of the Arctic frontier. The U.S. Arctic state of Alaska makes more than 18 percent of the United States' total landmass, but it only represents less than a third of a percent of national GDP. However, for Washington, the Arctic's importance lies less in its economic value and more in its strategic location as the link between North America, Asia and Europe. As was the case during the Cold War (and continuing today), the Arctic remains the shortest route between the United States and its northern-hemisphere challengers for missiles (whether land-based or sea-based) and aviation. The U.S. Arctic is thus the centerpiece of U.S. national missile defense, and will soon host the largest concentration of U.S. fifth-generation military aircraft anywhere in the world.

But the melting sea ice has opened the way for increased surface traffic into the Arctic, adding a layer of complexity to the defensive frontier for both the United States and Russia. Both Moscow and Washington have resource constraints on their renewed Arctic focus. But as the physical and political environments change, each is reassessing its need and capacity to operate in and provide security over the Arctic. China’s growing activity has, perhaps unexpectedly, also provided at least one area of U.S.-Russian agreement — that is, the desire to keep Arctic governance within the hands of the eight Arctic nations, and to not allow the internationalization of the region (which is something China seeks).

But while both the United States and Russia see the strategic significance of the region, for Moscow, the economic component serves as an added compulsion for action. And for this reason, Russian activities in the Arctic will continue to prioritize further resource exploitation to strengthen the Russian economy, while rebuilding a robust strategic defense capability along the Arctic frontier. Moscow is already re-establishing front-line military bases in the region, deploying additional missile and anti-missile assets and aircraft to the Arctic.