Why Turkey Wants Their Invasion of Syria to Go Quickly 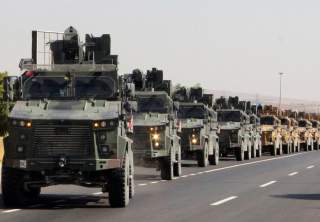 Key point: Turkey doesn’t want resistance to stiffen and so is going all in as fast as it can.

Turkish ground forces, part of its military incursion dubbed Operation Peace Spring, rolled across the border into northeastern Syria on Oct. 9 in an offensive for which the first few days will be key. The Turks may have almost all the military advantages in this fight, but they can't afford for their push to get bogged down, so they will attempt to seize their objectives quickly.

So far, it appears that Turkey's initial aim is to split the territory held by the Kurdish-led Syrian Democratic Forces (SDF) near the Turkish-Syrian border by driving down the middle to seize key roads linking the western and eastern parts of northeastern Syria. If successful, Turkey could further isolate the SDF holdings in the north and pave the way for additional assaults.

The operation is focused on the territory between the border towns of Tal Abyad in the west and Ras al-Ayn in the east. The Turkish spearheads are attempting to advance around the two towns, which are about 110 kilometers (68 miles) apart, and then drive down to the M4 highway about 30-35 kilometers away that runs on a parallel course to the border. Aside from Tal Abyad and Ras al-Ayn, both of which have a population of about 200,000, this territory is relatively sparsely populated and flat. The terrain and the dearth of major urban centers will significantly facilitate the Turkish advance, unlike the situation its military faced during its operations in Afrin and northern Aleppo.

The Turkish offensive relies heavily on Syrian rebel proxies of the so-called Syrian National Army, which consists of units of disparate combat effectiveness and discipline. Components from the Turkish army consisting of mechanized infantry, armor, engineers and special operations forces stiffen these Syrian units. Large numbers of artillery and significant air support abet these ground forces. Against this powerful force, the SDF's roughly 40,000 fighters consist predominantly of light infantry forces with little in the way of heavy equipment, artillery or armored vehicles. Their lack of heavy weaponry will make it difficult for the SDF to stand up against the heavily equipped Turkish offensive in the flat terrain, driving them to focus their defense on the villages and small towns within this zone. This strategy puts SDF troops at risk of being surrounded and cut off by the mobile Turkish units, something that is already apparent in the way the Turks have attempted to surround Tal Abyad and Ras al-Ayn.

Disadvantaged by the local geography and inadequately equipped, the SDF will be hard-pressed to hold back the Turkish offensive. This disadvantage adds to the likelihood the SDF could seek an accommodation with Russia and even the Syrian government in return for additional support. Even an influx of anti-tank guided missiles from the Syrian government could do much to inflict considerable casualties on the Turks and their Syrian rebel allies. The Syrian government, however, recognizing that the SDF is in trouble, will press hard for significant concessions in return for any support, likely including the demand that the SDF hand over key energy fields in the eastern province of Deir el-Zour.

As the SDF attempts to buy time and shore up external assistance, the Turks will be attempting to move their offensive as quickly as possible to minimize the international backlash that is already evident against it. In these early days of its move into Syria, Turkey's most effective ally will be speed.

Turkey Races the Clock as Its Ground Forces Enter Syria is republished with the permission of Stratfor Worldview, a geopolitical intelligence and advisory firm.