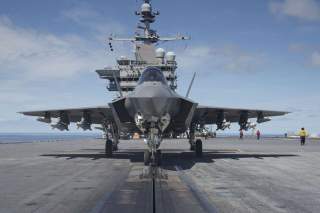 Key Point: Turkey’s insistence on buying Russian air-defense systems, despite warnings from NATO allies not to do so, could have serious consequences for the Turkish navy.

A new assault ship the Turkish navy is building now likely will lack fixed-wing warplanes, at least in the short term.

Ankara’s deal with Moscow to acquire the latest S-400 air-defense system is incompatible with the Turkish government’s involvement in the F-35 stealth fighter program, the United States and allies asserted.

Turkey was a major industrial participant in F-35 production. Turkish firms manufactured an array of components for the single-engine plane. The country’s air force planned to acquire 100 F-35s and, by mid-2019, had already sent aircrew and maintainers to the United States for training.

But the U.S. government in mid-July 2019 canceled Turkey’s participation in the fighter program. The S-400 system, in theory, could gather sensitive data on the F-35’s radar signature. If Russia acquired the data, it could modify its own air defenses to better counter the F-35’s stealth qualities.

There are only two vertical-landing “jump jet” fighters in service anywhere in the world: the F-35B and the older, Anglo-American Harrier. The Harrier no longer is in production.

Ankara had hoped to buy F-35Bs to fly from Anadolu, an assault ship based on the Spanish flagship Juan Carlos I. Spanish firm Navantia assisted Turkey’s Sedef Shipyard in building Anadolu. The vessel is slated to commission as early as 2021.

But lacking access to the F-35B, the Turkish navy probably will not be able to operate fighters from Anadolu’s deck.

The diplomatic fallout from Turkey’s S-400 deal is causing real harm to the Turkish military, depriving it of F-35As for the air force and F-35Bs for Anadolu. Turkish industry has made furtive gestures toward filling the gap.

Turkish Aerospace Industries revealed a mockup of a new stealth fighter at the Paris Air Show on June 17, 2019. The mockup of the TF-X fighter bears a resemblance to the U.S. Air Force’s own F-22.

But where the F-22 is a real, front-line warplane with an actual combat record, the TF-X is unlikely to even get built. Developing a stealth fighter is expensive.

Just three countries, in theory, can do it without spending themselves into a crisis: the United States, China and Russia. And just two of them -- America and China -- actually have done it. Russia’s Su-57 program has struggled to reliably produce meaningful numbers of working planes.

In the aftermath of Turkey’s expulsion from the F-35 program, Russia offered to sell the country Su-35 fighters. The Su-35, a variant of the Su-27, is sophisticated but lacks stealth features. A conventional fighter, it cannot operate from an assault ship.

Again, neither Chinese fighter is capable of operating from an assault ship. There have been rumors that China industry is developing a vertical-landing fighter similar to the F-35B and Harrier, but there’s no evidence yet that development is underway.

It’s worth noting that China has begun building an assault ship similar to Turkey’s Anadolu. Once the Chinese navy operates assault ships, the pressure will increase for Chinese firms to develop a jump jet.

An assault ship is useful even without fixed-wing fighters. Anadolu still could embark transport and attack helicopters as well as landing craft. But inasmuch as Turkey was hoping to deploy the vessel as an aircraft carrier, the country’s own ambitions are working at cross-purposes.

Turkey wants Russian air-defense systems and American fighters. It can’t have both.

David Axe serves as Defense Editor of the National Interest. He is the author of the graphic novels  War Fix, War Is Boring and Machete Squad. This first appeared last month.